Romance Around the World 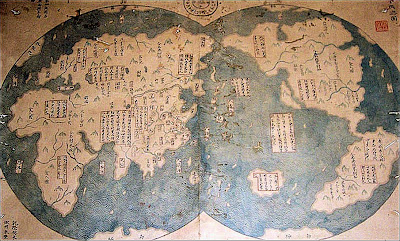 George Paizis has written of romantic fiction that

Today the genre originates from two primary sources - North America and the United Kingdom - is written by residents of these countries, acquired and published in these countries, yet translated and sold to tens of millions of readers all over the world. (Love 10)

While I suspect it's probably true that most romances are written, and first published, in English, Paizis seems to have overlooked the Australian and New Zealand romance authors. As far as I know associations for romance authors can be found in the UK (the RNA "started in 1960"), the US (RWA was "chartered in 1981" and has a chapter based in Canada), New Zealand (RWNZ was "founded in 1990"), and Australia (RWA was "formed in 1991"), . So I was very interested when, thanks to Lucy King's blog I came across news of

The romance genre is popular worldwide and I'm hoping this will be a collaborative post, because I know Teach Me Tonight has an international readership. So, if you know of any other romance writers's organisations, or of websites aimed at romance readers who are based somewhere other than the US and Canada, please leave a comment and I'll try to incorporate the information into the body of the post.

"Overseas, it's also a very popular programme - it's the best selling in France." (BBC)

Websites for romance readers include: Die romantische Bücherecke, Romance Forum and Liebesroman Forum. There is a German magazine dedicated to the genre, LoveLetter (and there's also a LoveLetter blog).

Rike Horstmann of AAR has written an article about the "general disdain with which romances are regarded here [which] is partly dependent on the way they are marketed."

German readers have finally started to blog, too, and the number of readers' blogs increases.

Though the German romance market is indeed dominated by English translations, this doesn't mean that there aren't any German romance authors. Most of them (have to) use English pseudonyms, though. Those who don't tend to write romantic comedies or chick lit.

Harlequin Mills & Boon India recently opened its offices there but they already had a strong brand presence. Andrew J Go, the Director of HM&B India says that

"A substantial percentage of Mills & Boon readership in India is male! You don't see that in other markets." Go has speculations on why this is the case. Perhaps it's just the sheer ubiquity of M&B novels: "Their sisters and mothers are reading them and since they are lying around the men read them too." Or perhaps it's because in a culture where information on sex and romance wasn't exactly in large supply, M&B novels were one available source. Perhaps it's just that Indian men appreciate the good read that most M&B novels are. (Doctor, The Economic Times)

A joint venture, created in 1981 by two large publishing groups - Harlequin Enterprises and Mondadori, Harlequin Mondadori is a specialised publisher of fiction for women and has become a point of reference for a new genre of women's fiction .
Every year Harlequin Mondadori publishes around 650 titles, an average of 50 per month, translated from the originals of around 1,300 Anglo-American writers, and with total sales in 2008 of more than 6 million copies and more than 260 million over twenty years.
The distribution channels used by the company are essentially three: newsstands, retail outlets and direct subscriptions.

Interestingly, despite there being no mention in this summary of the company's activities of romantic fiction written by Italian authors, they clearly are publishing some, in addition to the translations of novels originally written in English.

The taste of Japanese readers is different to that of others. "[They] love stories about Arabian sheiks and Mediterranean heroes but don't like romances set in hospitals or rural American settings." Also, the covers of the books must show less naked skin than those of the US market and use lighter colours. ("Category" 135)

translations from English (mostly US authors) are made very promptly, and sell well both as hardcover and as paperback. The society is dismissive of romance (all the worst stereotypes are magnified many times), but, like in the US, the books do sell. There are Russian authors as well, but even though they are published in Romance series, I would call them women's fiction.

Corín Tellado had her first novel was published in 1946 and continued writing throughout the twentieth century and into the twenty-first until her recent death. Jo Labanyi's "Romancing the Early Franco Regime: the Novelas Románticas of Concha Linares-Becerra and Luisa-María Linares" focuses on two other authors from this early period. Authors who have arrived on the scene more recently include Florencia Bonelli, from Argentina.

As the news at the beginning of this post demonstrates, there are some very active romantic novelists in Spain today. There would also appear to be increasing numbers of websites for Spanish-speaking romance readers, including: Autoras en la Sombra, Cazadoras del Romance, El rincón romántico, E-románticos, Gauchas Románticas, Noche en Almack's, Universo Romance.

I also found an online romance magazine and a blog written by a reader who reads her novels in English, but reviews them in Spanish.


The photo of the map of the world is from Wikimedia Commons. It shows a "1763 Chinese map of the world, claiming to incorporate information from a 1418 map. Discovered by Lui Gang in 2005."
Posted by Laura Vivanco at Thursday, November 26, 2009