The International Association for the Study of Popular Romance (IASPR) is proud to announce the creation of a new essay award in honor and memory of our colleague Conseula Francis. The winning essay will receive a $250 USD cash prize and be published in the peer-reviewed Journal of Popular Romance Studies, pending any needed revision according to the judges’ comments.

The Francis Award is for the best unpublished essay on popular romance media and / or the logics, institutions, and social practices of romantic love in global popular culture.  Essays may focus on work in any medium (e.g., fiction, film, TV, music, comics, or advice literature) or on topics related to real-world courtship, dating, relationships, and love.

Conseula Francis’s work on popular romance fiction focused on African American authors and representations of Black love, and priority for the Francis Award will be given to manuscripts that address the diversity of, and diversities within, popular romance and romantic love culture: e.g., diversity of race, ethnicity, gender, religion, class, sexuality, disability, or age.

I haven't posted links for a while so this is a very, very long post. It covers a lot of areas, including items I've added to the Romance Wiki and calls for papers.

Amy Burge will be at the Edinburgh Fringe (16 August) leading a session about romance writing.

Ali Williams has launched the CatRom Project, "an exploration of the way in which category romances address and engages with social issues. Its primary objective is to create a collection of analysis of individual novels, as well as interviews with authors and editors within the genre on the subject of issues within category romance."

Evangeline Holland has posted a paper on "Pistols and Petticoats: How Women Write the West", which is a reading of Western focused on Jezebel by Katherine Sutcliffe (1997), Fair Is the Rose by Meagan McKinney (1993), and Fall From Grace by Megan Chance (1997). She finds that


In the Western romance, as presented by female writers for a primarily female audience, the frontier myth is strong, particularly Turner’s thesis that the West was “‘free land’ into which the pioneers moved [and] was available for the taking, and that American progress began with a regenerative retreat to the primitive, followed by a recapitulation of the stages of civilization.” (White) All three novels end in some degree on a farm, with little interrogation as to how it is be acquired, but with the implication that it—domesticity through landownership and homesteading—is necessary for a believable romantic ending.

"LOVE BETWEEN THE COVERS was selected as the #1 choice of all 2015 videos by the American Library Association's Booklist Review".

News of Jo Beverley's death on 23 May was met with great sadness by members of the romance community, including the Romance Writers of America, her colleagues and readers at the Word Wenches blog, and individual authors such as Lynne Connolly.

Morton, Leith, 2016.
"The reinvention of romance: The rewriting, reception and censorship of 'ninjobon' in modern Japan." Journal of the Oriental Society of Australia 47: 85-115. Abstract

Thierauf, Doreen, 2016.
“Forever After: Desire in the 21st-Century Romance Blockbuster.” Journal of Popular Culture 49.3: 604-26. Excerpt. [As I've mentioned before, I don't tend to add items about Fifty and Twilight to the Romance Wiki. They're kind of a phenomenon in their own right, though obviously they do have a romance at their centres. This article really disappointed me because it only looks at Twilight, Fifty Shades and a Pride and Prejudice fan fic but nonetheless draws sweeping conclusions about popular romance fiction, such as "Romance’s generic requirement that the hero should be volatile in his affections and sexually intimidating is brought to its logical conclusion in these series" (618). This is not a "generic requirement" of romance: the author would have done better to limit their conclusions to Twilight and Fifty.]

Eric just re-tweeted an announcement about the republication of some romances in Ladino. 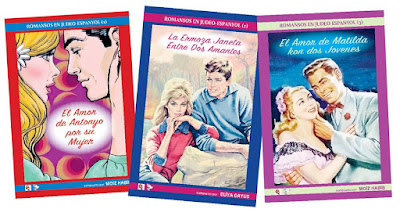 Below are two of the original covers, which are in the collection of the Alliance Israélite Universelle. 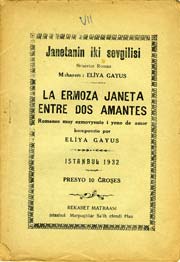 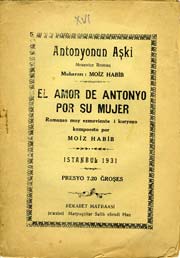 Seventeen of these little pamphlets were among the books donated by the family of Israël-Salvator Révah (1917-1973). They're works of popular romantic fiction, written in Ladino (the language of Sephardi Jews, which is very similar to medieval Castilian/Spanish) and published in Istanbul between 1930 and 1933. [Images and details from eSepharad.com]

Karen Gerson Şarhon is responsible for the republication of the works by the
Sentro Sefaradi de Estambol. They'll be publishing 16 of them, at a rate of 3 every month and a half. The first three (pictured at the very top of this page) are: El Amor de Antonyo por su Mujer (by Moiz Habib), La Ermoza Janeta entre dos Amantes (by Eliya Gayus) and El Amor de Matilda kon dos Jovenes (by Moiz Habib). Anyone interested in obtaining copies should write to: sephardiccenter@gmail.com [Details from Salom]
Posted by Laura Vivanco at Friday, July 01, 2016 0 comments