Happily Ever After: A Folklorist's Perspective

The recent PCA/ACA conference led to discussions about the happy ending in romance and Elizabeth Lane, in particular, wondered about the "codification of the HEA" and whether it had been studied from "a folklorist's perspective".

Luckily, the community of romance scholars includes Linda J. Lee, a folklorist at the University of Pennsylvania. In response to Elizabeth's question, she generously wrote a micro-paper about it via Twitter, which I'll collate below. The first tweet in the thread's here. 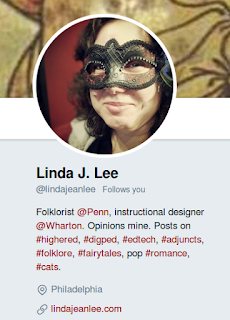 For context, I'm a folklorist who studies fairy tales and romance - and I'm always happy to wade into definitional discussions about genres. I want to make sure that I'm hitting the central part of the question, though. It sounds like it's - at least in part - about the happily ever after and it's place in fairy tales.

Yes, most European fairy tales do end happily ever after - and most European languages have closing formulae that make this point. In English, it's "happily ever after," but other languages change this up a bit. For instance, in various Italian dialects, the formulaic ending is something more like "they lived happily and here we sit without a cent." Closing formulae of Sicilian fairy tales often draw a contrast between the circumstances of the characters in the taleworld and the storyteller/audience in the real world. The Snake Who Bore Witness for the Maiden ends with (English translation): They lived happily and content, but we have nothing to pay the rent. Here's a selection from Jack Zipes' translation of Laura Gonzenbach's Sicilian Folktales. Zipes translated from German into English (Gonzenbach had translated from Sicilian into German when the collection was published in 1870): 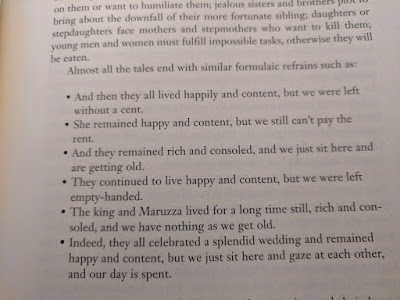 [LV - I was curious so I went off to look for Spanish fairy tale endings and there are lots of different ones, but apparently one of the most common is “fueron felices y comieron perdices” (they were happy and ate partridges)]

But more notably, not all fairy tales end happily. My favorite example of this is a fairy tale included in the first edition of the Grimms' Kinder- und Hausmarchen but omitted by the 7th edition in 1857 called "The Children Who Played at Slaughtering." Yeah, it ends pretty much the way you expect based on the title.

And many don't end in marriage. Take, for instance, Little Red Riding Hood (ATU 333). In Charles Perreault's 1697 tale, the wolf eats the grandmother and the little girl, and the audience gets a warning about the dangers of sweet-talking wolves who follow you into your bedroom. And the Grimms' version of Little Red Riding Hood from 1812 has a male rescuer figure that releases the grandmother and the girl from the belly of the wolf. (My students often read this restoration as a metaphor for marriage, but there's definitely not one on the page.) An oral version like "The Story of Grandmother" comes closest to a happily ever after because the tricky heroine rescues herself. Plenty of eroticism, but still no marriage. Here's the text: http://boj.pntic.mec.es/~jmarto1/01tradicion-oral/delarue.html

Even when traditional oral European fairy tales end in marriage, it's usually not terribly romantic. The prince tries to buy comatose Snow White, for instance. Many female protagonists are really just making the best of a terrible situation. Some end up in marriages while running away from incestuous fathers (like Donkeyskin, a story that bears lots of similarities to Cinderella). Some certainly do have some romantic moments, though. But in so many others the female protagonists marry their rapists. Yeah, early versions of Sleeping Beauty didn't awaken with a kiss. In Basile's "The Sun, the Moon, and Talia," she wakes up when one of the twins she gives birth to sucks the piece of flax from her finger while trying to nurse. Yep. No kiss. But she eventually marries her adulterous rapist. So it's all good, right? There's a Sicilian fairy tale called "The Snake Who Bore Witness for a Maiden" in which a prince rapes the heroine and then plans to marry someone else, except for a marvelous snake who wrecks that plan.

There is a relatively recent concept of "anti-tale" that denotes fairy tales with a parodic or inverted structure. But Don Haase rightly criticizes this concept, because fairy tales have always had a variety of structures and endings.

The HEA of fairy tales is, in some ways, a modern invention. Arguably an inevitably of film adaptations that have longer stories with more developed characters. And again - if the choice of marrying your rapist or never marrying at a point in history when women had few choices.... Happily ever after means something quite different.

However, if we look at the literary fairy tales from the French salon writers (mostly women, writing for other women), there are stories with narratives and happily ever afters that much more resembles romances. Probably the best known of these is "Beauty and the Beast," originally published in French in a novella length by Gabrielle-Suzanne Barbot du Villeneuve, then retold by Jeanne-Marie Leprince de Beaumont as a shorter story in 1756. (I'm currently revising an essay on consent in monster bridegroom stories, including Beauty and the Beast, so this tale type is top of mind at the moment.) If you've seen or read, oh, just about any version of Beauty and the Beast - be it Cocteau's film or Disney's or whatever - it almost certainly draws on Beaumont's tale (and, by extension, Villeneuve's).

But as will come as no surprise to the romance novelists and scholars out there, the female French salon writers have largely been overlooked by folklorists in favor of the male collectors and editors. Go figure. Elizabeth Wanning Harris has an excellent book about this - Twice Upon a Time: Women Writers and the History of the Fairy Tale.

So the French women fairy tale writers were writing longer, more complex stories, rather than the shorter stories that are today's canonical fairy tales. (Harries calls these "complex" and "compact" tales.) And we find stories that start to resemble romances among these stories. Again, Beauty and the Beast is probably the best example of this. 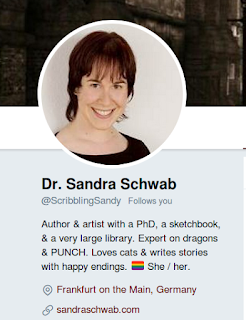 -----
Dr. Sandra Schwab expanded a little on some of these points:

To a large extent, the opening and closing formulae of fairy tales became codified with what in German is called "Buchmärchen" (book fairy tales), like the Grimms' KHM. (Just as a quick aside for non-folklorists: The term "Buchmärchen" was introduced to denote the difference between oral fairy tale tradition & published one. And then there's yet another category, namely, the literary fairy tale. All these different types influence on another)

Because most of the editors of collections of "Buchmärchen" were male, as Linda mentions, they also became infused with a greater emphasis on patriarchal / middle-class values, as becomes nicely evident when you compare different versions of a tale in diff eds of Grimms' KHM. I'd use the term "literary fairy tale" for the tales of those French women writers. I haven't studied them in detail, but from the little I read up on them, I seem to remember that many of them nicely subvert patriarchal values of their time. You can see the same thing happening in the re-tellings of fairy tales written by 19th-century British women writers, e.g., "The Brown Bull of Norrowa" by Maria Louisa Molesworth.
------

Romance Scholarship at the PCA/ACA Conference

The PCA/ACA conference is taking place this week and the  programme for romance is here. I've tried to pick out the papers I think are focussed on romance novels and I've added links to what I think are pages about their authors (however, I can't guarantee the links are/will remain correct).

Diane K Peterson
Where are all the Fun Books: Holdings of Popular Romance and Science Fiction Novels in Academic Libraries

“A recipe for sugary-sweet erotica:” Consumption in Alexa Riley’s Novellas

“Doubt Creeps In”: Sarah MacLean and the Inverted Orpheus of One Good Earl Deserves a Lover.

Rainbow nation in love. South African popular romance in Afrikaans and the Politics of Representation

Mr Worldwide: How global is your alpha?

Happy for Whom? The Contingent Happy Ending in Romance Fiction

“Welfare Reform, Romance, and a Black Love Ethic for the 1990’s”

Love to Teach You: Pedagogical Reflections on Alisha Rai (Hate to Love You) and Alyssa Cole (An Extraordinary Union)

Explaining the Appeal of Popular Romance Novels in Aesthetic Terms

Idyllic Escapes and Ideal Theory: What Romance Novel Settings Can Tell Us About What’s Wrong With The Real World

Engaged, but Not Enfranchised: Political Women in the novels of Rose Lerner

Lucy Ann Sheerman
The Agon-y and the Ecstasy: Heroic Confrontation in Romance Novels