“The past is always tense, the future perfect.“ (Zadie Smith)

Zadie Smith’s debut novel White Teeth was published in the January of 2000 and marked the beginning of a new millennium of women’s writing. Considering that this and other texts released around the turn of the century are soon to be the same age as current undergraduates, it seems timely to move on from well-worn discussions of literature produced in the 1970s onwards and focus on women’s writing in the twenty first century.
The contemporary, as a liminal temporal space, marks the transition between past and future and as such is not only notoriously hard to frame but its fluid and ephemeral nature continues to present a challenge in literary studies and beyond. Contemporary literature, in many ways simultaneously ‘with the time’ and then quickly outdated, presents a curious and exciting paradox to think through questions of literary form, the literary market place, the role of authors as public intellectuals and contemporary readers. The need to focus on the present and contemporary state of women’s literature seems particularly poignant in a post-Brexit and Trump era in which laws and ideas surrounding the future state of gender, race, and class politics are ever more obscure and uncertain.
Join us on the 8th and 9th September 2017 as we seek to position the most recent work (post 2000) of established authors alongside the field’s newer voices in order to facilitate a conversation about the present state – and possible futures – of women’s writing.
Possible conference themes:
Please send abstracts of 250 words and a short bionote to conference@pgcwwn.org until 30th June, 2017. 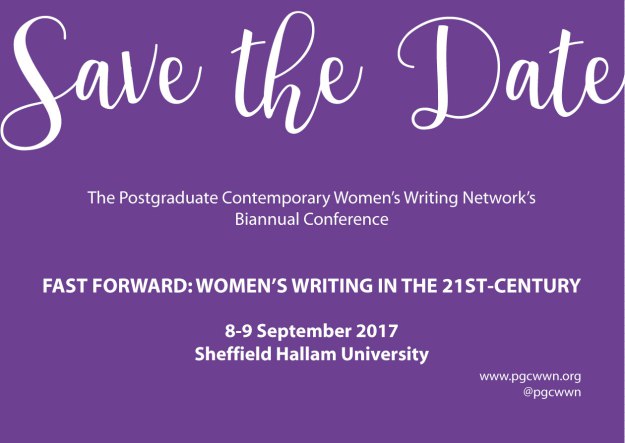 The Seventh International Conference on Popular Romance Studies
Think Globally, Love Locally?
Sydney, Australia
27-29 June, 2018
Space, place, and romantic love are intimately entwined. Popular culture depicts particular locations and environments as “romantic”; romantic fantasies can be “escapist” or involve the “boy / girl / beloved next door”; and romantic relationships play out in a complex mix of physical and virtual settings. The romance industry may be globalized, but popular romance culture is always situated: produced and circulated in distinctive localities and spaces, online and offline. Love plays out in real-world contexts of migration and dislocation; love figures in representations of assimilation and cultural resistance; in different times and places, radically disparate political movements—revolutionary, reactionary, and everything in between—have all deployed the rhetoric and imagery of love.

For its seventh international conference on Popular Romance Studies, the International Association for the Study of Popular Romance calls for papers on romantic love and popular culture, now and in the past, from anywhere in the world. We are particularly interested, this year, on papers that address the relationship between love and locality in popular culture:  not just in fictional modes (novels, films, TV shows, comics, song lyrics, fan fiction, etc.), but also in didactic genres (advice columns, dating manuals, journalism), in advertising, and in both digital and material culture (wedding dresses, courtship rituals, etc.).

The conference will be held at Macquarie University’s city campus, 123 Pit Street, Sydney. The venue is in the heart of Sydney’s CBD shopping and dining precinct, a 15-minute walk away from the Sydney Opera House, Harbour Bridge, and historic Rocks area.

·         Material locations and imaginary spaces for love, and the combination of the two in Edward Soja's concept of "thirdspace"
·         Migration and love: migration for love, love hampered by distance, love in migrant and refugee communities
·         Non-geographic love (e.g., love experienced entirely online) and the intersections of technology with long-distance love, now and in the past
·         Lieux de memoire in the context of romantic love (as opposed to national identity)
·         Love and nationalism, love and regionalism, love and (local) political struggle
All theoretical and empirical approaches are welcome, including discussions of pedagogy.

New Issue of the Journal of Popular Romance Studies


Now that we've switched to a rolling publication format in JPRS, new pieces will appear both individually and in thematic or "special issue" groups. Today, we begin rolling out Volume 6 of the journal with a new Special Issue on Critical Love Studies, edited by Amy Burge and Michael Gratzke. The table of contents is below, and you can find the whole issue here: http://jprstudies.org/issues/volume-6.

Enjoy! And spread the word!

There's a notice in Evanston Now that there's going to be a film and Q&A session:


Love Between the Covers: Film Screening and Discussion will be held Saturday, April 29, from 2 to 4:30 p.m., Community Meeting Room, Main Library.

Every year romance lit outsells mystery, sci-fi, and fantasy combined. Yet until Emmy-Award winning filmmaker Laurie Kahn turned her camera on the genre, no filmmaker had ever taken an honest look at the amazing global community that romance writers and readers have built.

So why is romance the best-selling genre in publsihing? Do romance novels exploit women or empower them? Following the film three local romance writers, Amy Jo Cousins, Kate Meader, and Julie Ann Walker, will be on hand for a panel discussion moderated by romance scholar, Professor Eric Selinger, of DePaul University. Come for the film, but stay for the Q&A and the chance to ask all your burning questions about contemporary romance novels.


As some of you know, I've been researching the representation of disability in romance for a while now; this new project will gather data from romance readers, writers and other industry professionals with the aim of better understanding how readers respond to depictions of disability in romance, what motivates authors to write disabled characters, and if there are any barriers to publishing romance novels featuring disabled characters.

I'm delighted to have received funding from the RWA Academic Research Grant for the second phase of the project, which focuses on writers.  The first phase focuses on readers, and our reader survey is now available at:

Reading for Pleasure: Romance Fiction in the International Marketplace

Free and open to the public.

RWA Academic Grant Awarded, What's New to the Wiki and a Couple of Other Links

The 2017 RWA Academic Research Grant has been awarded to:

RWA awarded funding to Dr. Kate Brown's project, which explores how English common law and constitutionalism give fundamental structure and substance to the historical romance genre.

RWA awarded funding to Dr. Ria Cheyne's project, which seeks to advance the scholarly conversation about disability and romance and will also engage with romance readers, writers and other industry professionals to encourage new conversations about romance, disability and representation.


I've only added a couple of items to the Romance Wiki bibliography recently, so I thought I'd add a few blog posts to today's post:

Anne N. Bornschein took a look at "a romance novel that deals with the history of women’s academic work—particularly in the sciences—and how it has often been erased, dismissed, or appropriated by male colleagues."

Olivia Waite observes that "writers make millions upon millions of tiny, instinctual decisions that add up to internally consistent structures" and suggests it's important to start "recognizing the partly hidden pattern[s]."

And new to the Wiki are:

The HEA is a non-negotiable element of romance and one I want to use in my literary romance novel (it is already a staple in my historical romances). The parameters I am giving myself for the literary romance is that it must be structured around at least one romantic relationship between a man and a woman (although there may be more than one), and that it must end optimistically, with a happy ending (although not necessarily the same kind of happy ending as a traditional romance). I do not want to sidestep the inevitability of suffering. I want my characters to experience love and romance in the context of real world pressures – infidelity, mental illness, bereavement  – and I want to face up to the inescapable finality of death, while still (somehow!) managing to reach that optimistic ending. This will be a point of difference between popular romance and my literary novel, and I hope it’s one I can navigate without slipping from ‘romance’ into ‘love story’.