The programme for the one-day conference, "My Poor Devil: 100 years of Georgette Heyer's The Black Moth" is now online here: https://www.eventbrite.co.uk/e/my-poor-devil-100-years-of-georgette-heyers-the-black-moth-tickets-165275781311

It's being held on 20th November and there is a charge to attend. Tickets can be booked now.

My Book now Available as a Free Pdf or in Paperback 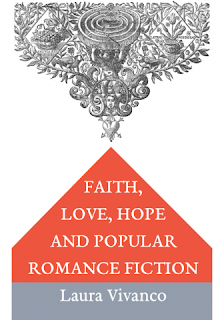 In addition to being available on my website, Faith, Love, Hope and Popular Romance Fiction (2020) can now be downloaded as a free pdf. A paperback edition of the book can be purchased directly from Lulu.com or from other sites e.g. the Book Depository or Amazon (UK) (US).

It explores romance novels from a theological perspective and suggests a new definition of the romance novel to complement other definitions which focus on structural elements: "modern popular romances are novels whose authors have assumed pastoral roles, offering hope to their readers through works which propagate faith in the goodness and durability of love."

The first section of the book is a general overview of how romance authors offer hope and pastoral care to their readers through works which propagate faith in the goodness and durability of love.

The second section explores some aspects of faith, hope, love and pastoral care in more detail: words and power; the different "faith" traditions in the precursors to the modern romance; what it means to hope for a "prince" as saviour; damnation as the absence of love, and metaphorical devils and hells; false or damaging forms of love and how to discern them. This section is primarily composed of chapters which focus on specific texts: Piper Huguley's A Precious Ruby (2015); Rose Lerner's In for a Penny (2010); Alyssa Cole's A Princess in Theory (2018); Nora Roberts' Three Sisters trilogy (2001-2002).

Here's the Call for Papers:

In February 2016, the New York Times published “A Valentine’s Day Reading List” that did not include any character, love story or book from Africa. In response, Grace A. Musila took to social media where she started #LoveinLiteraryAfrica, ‘a protest against this oh-so-familiar tradition’. Musila’s tweet received a remarkable response from the “African literati” who immediately began to share their favourite love stories from Africa. Five years later, in February 2021, Kiru Taye, one of the founding editors of Romance Writers of West Africa, was named as one of USA Today’s Bestselling Authors: a clear demonstration that there are African authors writing within the romance genre, and a sign that it is time—indeed, past time—for scholarship on popular romance fiction to address the thriving worlds of popular romance in Africa.

Romance imprints abound on the continent, including Sapphire Books, Nollybooks, the imprints of NB Publishers and Romanza from South Africa, Drumbeats from Kenya, Adoras from Cote d’Ivoire, Littattafan Soyayya, Ankara Press, Ebonystory and Love Africa Press from Nigeria. Scholarship on African romance remains marginal, in relation to studies of western romance, but this scholarship does exist, including a foundational essay by Lydie Moudileno on “The troubling popularity of West African romance novels” in Research in African Literatures (2008), a special issue of the South African feminist journal Agenda on “Gender and Popular Imaginaries in Africa” (October 2018), a special issue of Feminist Theory on ‘Chick-Lit in a Time of African Cosmopolitanism’ (April 2019), and a forthcoming special issue on popular romance written in Afrikaans for the digital journal Stilet. This special issue of the Journal of Popular Romance Studies therefore aims both to bring together scholars doing research on popular romance in Africa and to introduce existing research on the genre at the African continent to popular romance academia.

If, as Moudileno argues, the local creativity involved in “Africanizing the romance” allows romance readers and writers to manipulate structures and produce new meanings that are linked to the experience of the postcolony, thus opening up ‘the potentialities of an overtly marginal literary genre’ (2008:128), our hope for this issue is to Africanize popular romance scholarship. We are therefore interested in essays about all aspects of popular romance writing in Africa: its writers, readers, publishing houses, and scholars. We want to map the dynamics of popular romance genre in Africa and investigate these in their specificity and/or comparability with popular romance from other geopolitical areas. We seek to explore how popular romance shapes Africa, and how Africa shapes popular romance. What does the production and consumption of popular romance reveal about contemporary Africa?

We are open to submissions from a wide range of disciplinary and interdisciplinary contexts, including but not limited to: cultural studies, literary studies, gender studies, publishing studies, history, sociology, philosophy, psychology, anthropology, political science, law, and music. Since this is an electronic publication, we also welcome multimedia and artwork contributions documenting the world of popular romance in, on, and about the African continent. We welcome articles discussing works by authors on the African continent as well as African authors in the diaspora. We seek submissions on (but not limited to) the following topics:

The editors have set a deadline for expressions of interest of 30 September 2021. More details can be found at the IASPR/JPRS website.

The items tagged "Africa" in the Romance Scholarship Database can be viewed here.