Last weekend I went to Sheffield to be part of a panel discussing "Why Read Harlequin Mills & Boon Romances?" with senior editor Flo Nicoll, romance authors Heidi Rice and Susan Stephens and fellow academics Amy Burge, Val Derbyshire and Fiona Martinez. I've written up a post about the event here and Fiona's observations are here.

New to the Romance Wiki Bibliography:

Sarah's a romance author and her website's here. Abstract:


The call for papers deadline for PCA in San Diego in April next year is fast approaching! Heather and I would love to continue Eric's work and make this a really awesome, vibrant, interesting gathering of scholars, so please make sure you get those abstracts/panel proposals/etc in before October 1. http://pcaaca.org/romance/

I've got four items to mention today: a PhD in progress which suggests that historical romance fiction can empower incarcerated women, a review of a Mary Balogh novel which turns into a much broader analysis of romance fiction, a summary of a symposium and news of some "tongue-in-cheek" Mills & Boon (non-romance) publications.

Margaret Jamieson is working on


a non-traditional PhD study that involves writing a historical romance novel and accompanying exegesis, where the main aim is to show how oppressed women (some incarcerated) can become empowered through both reading historical romance novels and engaging with the heroines in these novels. In this context, oppression refers to women who perceive themselves to be isolated from opportunities, and disadvantaged by feelings of inadequacy and domination by patriarchal structures. (155-156)

What makes this particularly interesting is that Margaret seems to be basing this at least partially on personal experience:


As a mature student, Margaret knew she could draw on her life's experience as part of the methodology used in preparing the novel and exegesis. Her vision in starting this journey was underpinned by wanting to show fellow incarcerated women that study was possible, and particularly that reading historical romance novels was enjoyable and empowering. The power in the historical romance resides in its representation of the empowered heroines who subvert traditional expectations of women's roles in marriage and in society. (158)

Having lived with other incarcerated women, the student observed the helplessness that they felt. Many of these women said they would appreciate female role models whom they could both relate to and be inspired by. Many of these women also had a poor understanding of literature or indeed reading. The student believed that by introducing the historical romance novel to these women, it would provide an easy read with a positive outcome on their self-esteem. The historical romance novel can take a lonely isolated woman to a place where she can find companionship and beauty. So this premise was the basis for her research aims. (162)

the student reached a deeper understanding of the difficulties experienced by women in colonial Australia. As her novel developed around the obstacles that her characters experienced, she came to realize that some aspects regarding gender inequality have not changed over time. (166)


The PhD is not yet available to read because it "is still in progress" (156) but Margaret herself is now "free from incarceration" (159).

------------------
Rohan Maitzen's review of Mary Balogh's Only Beloved includes plenty of observations about the romance genre as a whole. For example:


The happy ending is fundamental to the genre: it’s what readers expect and what they know the books will deliver. But such positivity, especially when presented in an unapologetically feminized form of popular fiction, does not get taken seriously. At least since the heyday of Modernism in the early 20th century, with its credo “make it new,” more literary value has attached to writing that upsets, rather than satisfies, expectations; more prestige has belonged to unfamiliarity and its discontents than to the pleasures of getting, even vicariously, exactly what you want.


------------------
Lucy Sheerman's written a report on the PGCWWN symposium on "Representations of Romantic Relationships and the Romance Genre in Contemporary Women’s Writing" which was held in Sheffield in 11 June. I wrote a summary of the various papers here but Sheerman's report goes into more depth about the relationship between shame, romance-reading and fire, suggesting that "It seems that the idea of shame is rooted in the earliest origins of and attitudes to romantic fiction". 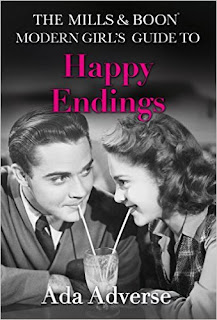 
is to launch a series of "Modern Girl's Guides" containing "vital advice every woman needs to survive the modern world".

Tongue-in-cheek guides to working and drinking will be published in November, with more titles to follow. (BBC)

Apparently they're using "fabulous archive photos" so presumably they won't be drawing on their archive of vintage covers again, as they did with their colouring book for adults. I'm most interested in the fourth book in the series: The Mills & Boon Modern Girl's Guide to Happy Endings. Are they planning to mock an essential part of their own novels? I'll have to wait until January to find out.
Posted by Laura Vivanco at Saturday, September 03, 2016 0 comments