I've posted in the past about (and cited) the Ripped Bodice's reports on racial diversity in romance publishing so I thought it was important to note that concerns have been raised about the methodologies used in their production.

Here's the abstract/summary of Nick and Ari's critique, which can be found in full here:

We offer a critique of The Ripped Bodice’s State of Racial Diversity in Romance Publishing Report. With its lack of transparency, unethical, and unclear methodology, the diversity report leaves us with more questions than with answers. Though well-meaning, a study like this does a disservice to both publishers and BIPOC authors, while also setting a dangerous precedent of allowing poor ethics and poor data practices to run rampant in the romance community. In the last couple of years, we have seen the damaging effects of allowing misinformation in the media, so why are we still uncritically accepting a report that could be spreading misinformation to be published year after year? We urge The Ripped Bodice to do better and to carefully consider a few of the alternatives presented in this article.

We outline the ethical, transparency, and statistical issues & offer suggestions for alternatives. We didn't *want* to do this but their resounding silence in response to our Tweets/email/requests to view the raw data led us to believe that this needs further attention. We aren't saying what they are doing is unimportant, but the study needs to be conducted appropriately.

The Ripped Bodice have responded to the criticisms in detail here. Responses to their tweet about this can be found here, there's a list of tweets which respond by quote-tweeting it here, and I'm sure there are many other responses. Here's a tiny sample of some of them:

The Ripped Bodice has the attention of major news outlets. Television interviews. Huge articles. It’s time to push for more than just googling “Is AUTHOR NAME white?” or scrolling through social media. You have the platform, and you should strive for more than just this.

I don’t know much about statistics, but I do know publishing, and breaking things down by imprint would have definitely changed how some of these numbers look (cough Kensington cough segregated lines cough cough ahem).

I think we need to be more critical about WHY TRB thinks *they* need to keep doing this. Hint:

Yeah this is actually my only issue as well. https://t.co/aen8bhZaFZ

That was part of the problem. So many white people didn't give a fuck. So again, critique away, but publishers still needs many someones to reminded them quarter after quarter that their discriminatory practices are not okay.

I'm not at all invalidating the follow up, but I'm still confused about the amount of energy being spent on this topic when "It's right but not rigorous" would suffice. And when I say I'm confused, I'm not being cute. It's actually distressing me because I don't understand.

Without real data, we don’t know how much publishing is sticking to their old shenanigans. White Latinx and Asian authors have ALWAYS made deals ahead of Black authors. Y’all just assume that because we make the most noise we benefit the most. pic.twitter.com/YiXqG5bJxc

and because the following has three tweets in sequence, I'm putting it in as an image rather than an embedded link, but it came from here: 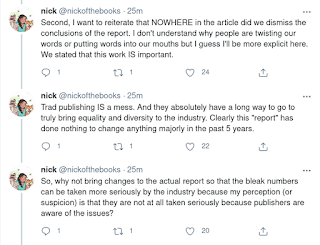 This is Nick saying (at 1:47 pm · 24 Mar 2021 ) "I want to reiterate that NOWHERE in the article did we dismiss the conclusions of the report. I don't understand why people are twisting our words or putting words into our mouths but I guess I'll be more explicit here. We stated that this work IS important.

Trad publishing IS a mess. And they absolutely have a long way to go to truly bring equality and diversity to the industry. Clearly this "report" has done nothing to change anything majorly in the past 5 years.

So, why not bring changes to the actual report so that the bleak numbers can be taken more seriously by the industry because my perception (or suspicion) is that they are not at all taken seriously because publishers are aware of the issues?"

CFP: Conference on Georgette Heyer’s The Black Moth at 100

Dr. Sam Hirst, of Romancing the Gothic, is organising a conference and looking for submissions:

1921 saw the publication of a 19-year-old Georgette Heyer’s first novel The Black Moth. This tale of romantic highwayman, demonic rakes, abduction, ravishing beauties, betrayal and deceit set in the 18th century began a career which spanned over 50 years. [...] Her legacy is not, of course, without its problems – the world she created has its limitations, its prejudices and its biases. This one-day online conference on 20th November 2021, will seek to explore Heyer’s work and her legacy with a spirit both of celebration and of critical enquiry.

We will be joined on the day by Keynote Speaker Jennifer Kloester, author of Georgette Heyer: Biography of a Best-Seller (2011) and Georgette Heyer’s Regency World (2010). We will also be joined by a panel of authors for a roundtable on ‘Queer Reimaginings of Georgette Heyer’. We will be joined for this panel by Rose Lerner, Zen Cho, Cat Sebastian, K J Charles and Olivia Waite all of whom write within a Regency setting including communities largely absent or vilified in Heyer’s work, including queer communities, people of colour, the working class and Jewish people. This roundtable will look at both the influence of Heyer and at the idea of moving beyond the ‘Heyer World’ to explore different aspects of Regency England through more or less fantastical settings!

We are looking for papers to be included on 3-person panels throughout the day. We accept panel submissions or individual papers. We strongly encourage work which engages in interdisciplinary study. The aim of the conference is to explore aspects of Heyer’s work encapsulated in or hinted at by her first novel The Black Moth.

There are two types of paper that we are looking for.

The closing date for submissions is 31st May 2021. More details here (and also here).

Sam has added on Twitter that "Everyone is welcome to participate - academics and non-academics alike. [...] We want to create a diverse and welcoming space for everyone. We are queer friendly and want to include perspectives from all over the world. [...]

Regency spaces can sometimes be unfriendly to people of colour, queer people and people of different faiths. We are dedicated to making sure that that's not the case. Welcome one, welcome all."

Romancing the Gothic has a code of conduct and "there is a small honorarium for each speaker because we believe in valuing people's work and time in concrete ways."