New to the Wiki: The "Coming Soon" Edition 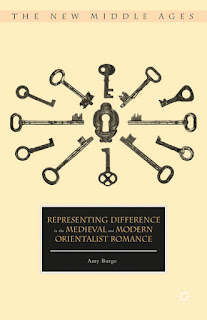 Amy Burge's Representing Difference in the Medieval and Modern Orientalist Romance is due for publication in March 2016 by Palgrave Macmillan. It


proffers innovative case studies on representations of cross-religious and cross-cultural romantic relationships in a selection of late medieval and twenty-first century Orientalist popular romances. Comparing the tropes, characterization and settings of these literary phenomena, and focusing on gender, religion, and ethnicity, the study exposes the historical roots of current romance representations of the east, advancing research in Orientalism, (neo)medievalism and medieval cultural studies. Fundamentally, Representing Difference invites a closer look at medieval and modern popular attitudes towards the east, as represented in romance, and the kinds of solutions proposed for its apparent problems. 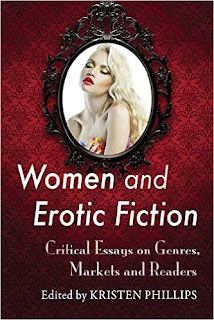 
I'd be grateful if anyone could let me know which of the other essays in the volume should also be included:

Every year the Romance Writers of America offer funding for research into the genre.


Here are some more details of who's eligible to apply:
and


The RWA Research Grant Program is open to faculty at accredited colleges and universities, independent scholars with significant publication records, and dissertation candidates who have completed all course work and qualifying exams. No candidate need be a member of the RWA.

This is definitely not limited to academics in English literature:


Appropriate fields of specialization include but are not limited to: anthropology, communications, cultural studies, education, English language and literature, gender studies, linguistics, literacy studies, psychology, rhetoric, and sociology. Proposals in interdisciplinary and cross-disciplinary studies are welcome. The ultimate goal of proposals should be significant publication in major journals or as a monograph from an academic press. RWA does not fund creative work (such as novels or films).

Email ThisBlogThis!Share to TwitterShare to FacebookShare to Pinterest
Labels: RWA

Romance in the Archives


Caryn Radick, who is the Digital Archivist and the Special Collections and University Archives at Rutgers University [...] has a cool research project where she is investigating how romance writers use archives, and she’s also very interested in depictions of archivists in fiction from the romance genre and other genres as well.

The transcript was put online on 4 October and I thought I'd pick out the bits most directly about Caryn's research.


Caryn: [...] I’ve been focusing on whether romance writers use archives when they’re writing their works, because when I was younger I started reading historical romances, and I learned quite a bit of history from them, so I figured somebody must be doing the research, and from what I understand, they do.

Sarah:  So you’re looking at how romance writers use historical archives in their writing.

Caryn:  Correct. [...] I constructed a survey which I was fortunate enough to be able to circulate through Romance Writers of America, and I got some really good responses. [...] Yeah, a lot of people who responded to the survey, a lot of them just really, said they really want to get those details of time and place correct, but they also like to get a voice that represents the time period or place that they’re looking at.  One of the things I really appreciated was there was a certain amount of, of reverence and enthusiasm for using archival materials which reflects what it was like for me when I was first getting into the profession.  The, the aspect of, wow, this is a diary that somebody wrote in the nineteenth century, and I can’t believe you’re letting me touch this.

Caryn:  That’s fine!  It, it’s great.  Most indicated that they would really love it if there was more information available online, which wasn’t exactly a surprise, because I think the expectation these days is that things are online.  People are a little surprised when you tell them that, no, actually, you’re going to have to come in to see that, or, you know, we can try to give you some information, but it, it’s not going to be available online.  And another aspect that, that didn’t surprise me was that some people were very enthusiastic or wanted to know more about how to use archives, but they felt that they didn’t quite know how to get started, which is, which is pretty common. [...]

Caryn:  [...] So, back in, I think it’s 2011, 2012, romance hit the archivists’ radar when Protected by the Prince by Annie West came to our attention, because the heroine of that book is an archivist, and, you know, being surprised that this –

Sarah:  You guys must have been like, wait, what?  Seriously?  She’s us?  Woohoo!

Caryn:  Yes.  She’s an archivist, and we’re, yay, there’s an archivist!  Wait, oh.  She’s wearing glasses.  Oh, she’s kind of frumpy.  [Laughs] [...] so it was kind of a moment of fun for, for the archives community, where suddenly, hey, there’s discussion about, there’s this book, it’s got an archivist heroine, probably a little bit making fun of the book and, and as I said, the stereotype of the archivist in it, and there was, there was even a, a blog had a contest to write your own archival romance, and there were a few other discussions, and then it kind of just went its own ways, as things do, but since I had read romance when I was younger and I, I’ve known some romance writers and I’ve gone to a couple of the events, it was in the back of my mind at the time that, you know, actually, now that I think about it, I know that romance writers that I’ve met seem to also be pretty detail-oriented and care about getting the, their novels right, and I started wondering if they use archives, and I suspected they did.

Items whose titles are hyperlinked are currently available free online in their entirety.
Chelton, Mary K., 2015.
"Readers' Advisory: There Seem to be More SEALs in Romance Fiction than in the US Navy, and if so, Why Does it Matter?" Reference & User Services Quarterly 55.1: 21-24. Abstract

Edlins, Mariglynn.
"Superhero, Sleeping Beauty, or Devil? The Making of Orphan Myths and Public Administration". [What stories exist that might influence how street-level bureaucrats think about children who are separated from their parents? [...] In this paper, I explore the narratives of superhero stories, romance novels, and horror films in order to identify the orphan archetypes they portray.]