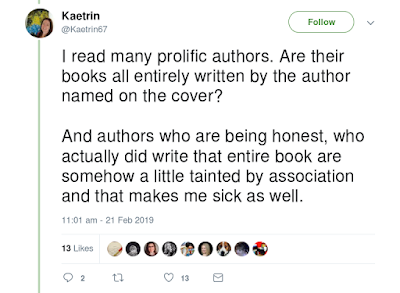 I hope things do indeed start to change. Another point which Robert makes also gives me hope: she observes that "it’s always a reader" who spots the plagiarism. That readers do spot it is an indication of readers' engagement with, and love for, individual books in the genre.
Posted by Laura Vivanco at Thursday, February 21, 2019 0 comments

"The institute will introduce 20-25 scholars from across the country and abroad to the research and pedagogical treasures of BGSU’s very special collections." These include the Romance Writers of America's archives, an extensive collection of romance novels and more papers and objects related to popular romance.

Some participants may receive travel grants. "If a grant is awarded, the registrant is still required to pay the $125 registration fee. It is also expected that the grant recipient present their research at a regional or national PCA/ACA conference within two years of the institute." Participants would also have to pay for accommodation.