RWA Committee was horrified by swearwords (but not, presumably, by racism)

The RWA has now released the independent audit into the situation surrounding the complaints made by Tisdale and Davis: https://www.rwa.org/Online/News/2020/Audit_Documents.aspx
[Archived here, with pdf report and supplementary documents in zip files (1), (2), (3).

Note that the report contains a report of words spoken by Damon Suede which, Corey Alexander warns, require a content warning for sexual harassment.

I will therefore add a content warning before the section containing this language.]

Here's some early reaction to the report: 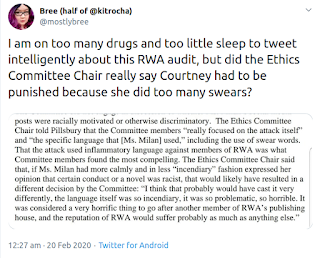 [That's from Bree (half of the Kit Rocha writing duo), and for the sake of avoiding any confusion, Bree is using the word "drugs" here to refer to medication.]

The section of the report of which Bree has taken a screenshot says:


The Committee did not engage in discussion of whether Ms. Milan’s social media posts were racially motivated or otherwise discriminatory. The Ethics Committee Chair told Pillsbury that the Committee members “really focused on the attack itself” and “the specific language that [Ms. Milan] used,” including the use of swear words. That the attack used inflammatory language against members of RWA was what Committee members found the most compelling. The Ethics Committee Chair said that, if Ms. Milan had more calmly and in less “incendiary” fashion expressed her opinion that certain conduct or a novel was racist, that would likely have resulted in a different decision by the Committee: “I think that probably would have cast it very differently, the language itself was so incendiary, it was so problematic, so horrible. It was considered a very horrific thing to go after another member of RWA’s publishing house, and the reputation of RWA would suffer probably as much as anything else.”  The Committee did not regard the tone of Ms. Milan’s comments as “safe and respectful” for a community of writers.

It seems some RWA members would probably consider other members' books to be full of horrible words.

If you yourself are offended by the use of swear-words, please do not read on (but this is not the section that requires a content warning):

The "incendiary" words used were "fuck" and "shit," which are hardly uncommon in romance novels. That nothing more "incendiary" was tweeted is evident from the report, which summarises Milan's use of swearwords as follows:


Ms. Milan also posted a series of tweets about a novel by RWA member and author Kathryn Lynn Davis, who is also an acquisition editor at Glenfinnan Publishing:
Ms. Milan posted an image of the cover of Ms. Davis’s novel Somewhere Lies The Moon, stating, “Here’s the book. I didn’t finish the sample. I didn’t need to. This book is like a bingo card of OH GOD DID YOU REALLY.” Ms. Milan stated that the “heroine ... is the obligatory blue-eyed half-Chinese woman” and went on to post a series of screenshots of passages from the novel that she characterized as examples of “standard racist trope[s].” Ms. Milan provided mocking commentary on the excerpted passages (e.g., “did you know that Chinese people don’t touch? Not even friends and sisters. It’s impolite you know”). She then wrote:


It does not appear from this report that the Ethics Committee at any point stopped to consider whether Davis's novel was "problematic" or "horrible" or whether it could have (as Milan stated) a negative effect on RWA members such as Milan herself. Should this not have been considered at very least a mitigating factor even if the use of the words "fuck" and "shit" can be considered "incendiary"?

Furthermore, as demonstrated by this tweet from Zoe York, it seems the truly inflammatory language contained in the report was produced by Damon Suede. 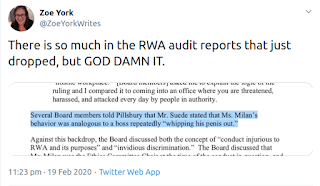 As noted in the report, when the RWA Board met to consider the recommendations of the Ethics Committee with regards to sanctioning Courtney Milan,

Details were not forthcoming, but Suede did find himself able to provide a general picture which, firstly suggested that Milan had done far more than simply tweet, and then equated her behaviour with a situation of sexual abuse in the workplace:

Mr. Suede stated that the decision had involved more than tweets seen publicly. He checked with Ms. Ritter about what he could say, and she suggested he keep the explanation general.

Mr. Suede told Pillsbury how he described the information to the Board:
Several Board members told Pillsbury that Mr. Suede stated that Ms. Milan’s behavior was analogous to a boss repeatedly “whipping his penis out.”

I'll refrain from swearing and just conclude calmly, and in a non-incendiary fashion, that Suede's language here was so misleading it was egregiously problematic and horrific. [Also, it's been pointed out on Twitter that this analogy is particularly horrific given that Milan has spoken publicly about having a boss who behaved in an inappropriate manner towards female members of staff.]

---
Edited to add that some people are disputing statements of fact made in the report. 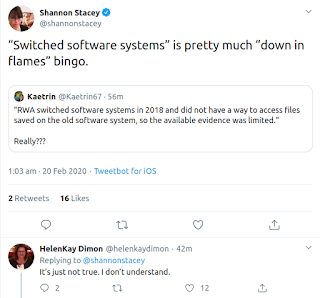 In this thread HelenKay Dimon says it is not true that "RWA switched software systems in 2018 and did not have a way to access files saved on the old software system". This is important because the report states that, this being the case, "the available evidence was limited" about past procedures.

Olivia Waite disputes the impression given concerning how complaints were handled: 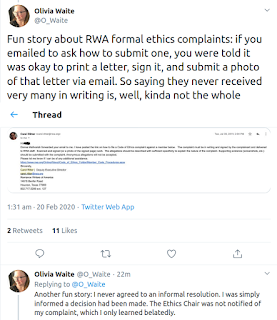 She provides a screenshot of an email from Carol Ritter to demonstrate that "if you emailed to ask how to submit [a formal ethics complaint to the RWA], you were told it was okay to print a letter, sign it, and submit a photo of that letter via email. So saying they never received very many in writing is, well, kinda not the whole."

And edited again to add that on 20 February Leslie Scantlebury, the Interim Executive Director of RWA (i.e. a staff member, given that the entire board have now resigned), who was not mentioned in the report as having had any involvement at all with the events surrounding the ethics complaint (unlike Carol Ritter and Allison Kelley), posted an apology to Courtney Milan on the RWA website in which it is acknowledged that:


The report detailed many mistakes and missteps that were made in the handling of the specific ethics complaints against Courtney Milan, as well as severe deficiencies in RWA’s ethics code and process as a whole.

The staff and I deeply regret what has happened to Courtney as a result, and offer our sincere apology to her for the mistakes and missteps made in the handling of the complaint. I cannot speak on behalf of the organization, and it will be up to the next Board to determine how we move forward, but the report proves again that RWA has a lot to fix and a great amount of work to do.

Courtney Milan has since tweeted that 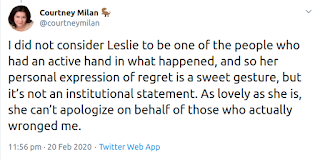 she "did not consider Leslie to be one of the people who had an active hand in what happened, and so [...] it's not an institutional statement. As lovely as she is, she can't apologize on behalf of those who actually wronged me." 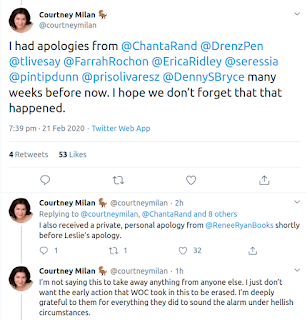 For those who may have forgotten exactly who resigned when, the report provides some context about the people Milan mentions: on 24 December "Board member Chanta Rand submitted her resignation" and "After the Executive Session on December 24th, a group of eight Board members – Denny Bryce, Pintip Dunn, Seressia Glass, Tracey Livesay, Adrienne Mishel, Priscilla Oliveras, Erica Ridley, and Farrah Rochon – demanded the resignations of Carolyn Jewel as President and of Damon Suede as President-Elect [...]. The group of eight Board members also resigned on December 26th.  On January 8, 2020, [...] Renee Ryan [...] resigned."
Posted by Laura Vivanco at Thursday, February 20, 2020 1 comments

Scholarship and thoughts on race, publishing and language

Programme for the 2020 Bowling Green conference is now available.

Our Guest of Honor for the conference will be Alyssa Cole. She is an award-winning author of historical, contemporary, and sci-fi romance. Her Civil War-set espionage romance An Extraordinary Union was the RT Reviewers’ Choice Award’s Best Book of 2017 and the American Library Association’s RUSA Best Romance for 2018, and A Princess in Theory was one of the New York Times’ 100 Notable Books of 2018.

One of the many people who'll be presenting papers is Christine Larson who recently had an article published about her research and the RWA crisis.

Some of her already-published work also discusses publishing and racism.

More coming soon: "She is currently writing a book on the 40-year history of romance writers’ professional networks."

K. J. Charles posted about the representation of non-English languages in English-language novels. Here's an excerpt:


Italicising serves as a nudge to the reader that they’re not expected to recognise or understand a word. That act very much assumes who the reader is. If you italicise all your Spanish in a book written about Mexicans, that rather suggests you don’t expect your book to be read by Mexicans. It is othering—and in many cases that can look like saying, “Those people are different from me and you, the writer and the reader.”

And finally, still on the topic of racism some more items which can't be added to the Romance Wiki bibliography because it's not around:


In several of the scores of romance novels she published between the 1980s and the early 2000s, bestselling American author Nora Roberts limns whiteness by deploying black characters as sacrifices or sidekicks. In her recent novels (2016–19), villainous white characters who express racist sentiments become scapegoats, obscuring racism’s broader structural and cultural dimensions. At a time when discrimination within romance publishing and award-giving has gained attention, it is vital to explore how the genre continues to center white readers and white identities, even while explicitly condemning racism.