According to some new research on popular fiction


the more Romance [...] authors participants recognized, the fewer morally dubious [...] scenarios they believed permissible [...]. In fact, once Moral Purity concerns - a measure of the importance people place on purity or sanctity when making moral decisions - was controlled for, Romance was the only variable besides Science Fiction that was clearly related to Moral judgment.(22)

The authors do note that "the correlational nature of this study limits any causal inference: it could [...] be the case that when it comes to choosing novels, people pick stories that will enforce their existing beliefs and desires" (23) but perhaps


reading romance novels, in which clearly identified heroes and heroines achieve an "optimistic, emotionally satisfying" ending [...], may encourage readers to view the world in black and white terms. That romance novels tend to end with a "happily ever after" may be particularly relevant given prior research showing a relationship between fiction exposure and Just World beliefs. (24)

The paper by Jessica E. Black, Stephanie C. Capps and Jennifer L. Barnes can be found here. Please note, though that this is a pre-print version and the final version of "Fiction, Genre Exposure, and Moral Reality" may differ a little from the version in Psychology of Aesthetics, Creativity, and the Arts.

-----
Sydney E. Thorp, an Honours Philosophy student at Hamline University, has written their honours project in the form of a romance novella, complete with a central love story and happy ending. The protagonists do briefly discuss popular romance fiction, too: Eva, our philosopher heroine, comments


"You want another example of how women and romantic love are easily dismissed?" Ava asked, frustrated. "Two words: romance novels. Even though the romance novel industry is an enormous, billion-dollar-a-year industry, almost entirely dominated by women - female authors, editors, publishers, et cetera - no one takes romance novels seriously as a genre of fiction. And why? Most likely, because it is connected with women." (15)


follows two people as they try to determine what romantic love is, and why it was a neglected or minimized philosophical object for centuries. As the characters converse, they develop the concept of philosophy described above, discuss the place of women, passion, and reason in philosophy, and determine – to the extent they are able – that romantic love is something people do, rather than a feeling or state of being, and is based on an unjustifiable attraction to another person and Aristotle's concept of friendship, specifically philia.

The idea of romantic love being a practice, rather than an emotion or a state of being, seems to be uncommon in philosophical work on the topic. It seems just as rare, especially historically, to think of romantic love as being between equals, who mutually care for each other and commit equally to the relationship.

You can read the abstract and download the whole of Entangled: Romantic Love and Philosophy as a pdf from here. 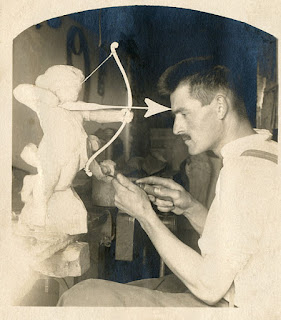 [Photo by Wolfgang Moroder and taken from Wikimedia Commons. It is not in the public domain.]

What's food for love? Food! At least according to Jennifer Crusie, who argues that:

1) "The kind of food makes a difference because it characterizes the people eating it."

In the context of "place," another reminder that the next IASPR conference is all about place:


Space, place, and romantic love are intimately entwined. Popular culture depicts particular locations and environments as “romantic”; romantic fantasies can be “escapist” or involve the “boy / girl / beloved next door”; and romantic relationships play out in a complex mix of physical and virtual settings.


We’ve pushed the due date for IASPR conference proposals back by two weeks, to September 15, 2017. The conference will be in beautiful Sydney, Australia, just a 15 minute walk from the Opera House and the Harbor Bridge; it runs from June 27-29, 2018. The full CFP is here. Please feel free to repost and distribute it!

Still on academic matters Amy Burge has written about the status of the "independent scholar" and I've been thinking about some gaps in the history of popular romance.
Posted by Laura Vivanco at Sunday, May 28, 2017 0 comments

There's a PhD opportunity at the University of Tasmania:


Popular Fiction in the Twenty-First Century

Popular fiction is the most significant growth area in trade publishing in the twenty-first century. This project is premised on the view that popular or genre fiction is a sector of the publishing industry, a social and cultural formation, and a body of texts. It will offer new insights into contemporary literary culture through systematic investigation of the contemporary significance of one or more popular genres (crime, thrillers, romance, or fantasy) in the twenty-first century. By employing a mixed methodology combining discourse and textual analysis, quantitative and qualitative data collection and analysis, and/or creative writing, Popular Fiction in the 21st Century aims to contribute to the increasingly urgent demand for conceptual and methodological frameworks for studying genre fiction.

If you don't follow the Pink Heart Society blog, you might want to take a look at Amy Burge's report on the 2017 PCA/ACA conference. Ria Cheyne's there too, introducing her Disability and Romance Project, which recently gained funding from the RWA.


Romance Writers of America is saddened by the news that Harlequin will be ending publication of five of their series lines in 2018.

More details here. As pointed out by Kay Taylor Rea,


this news is a huge blow to the romance community for a very big reason: Harlequin is closing Kimani Romance.

Why is this a big deal? The vast majority of Harlequin titles penned by black women are published as Kimani titles. The Kimani Romance line is described as stories featuring ‘sophisticated, soulful and sensual African-American and multicultural heroes and heroines who develop fulfilling relationships as they lead lives full of drama, glamour and passion.’ These titles cover a number of subgenres, so hopefully Harlequin will make a concerted effort to integrate existing series and current authors into other lines.

I’ll be keeping an eye out for official word from Harlequin and will certainly be watching how the Kimani authors are treated. This could be a huge setback for diversity in romance.

And, finally, the latest publications to be added to the Romance Wiki:

And the Winner Is... (First Annual Francis Award)

The International Association for the Study of Popular Romance (IASPR) is proud to announce the winner of the first annual Conseula Francis Award for the best unpublished essay on popular romance media and / or the logics, institutions, and social practices of romantic love in global popular culture. The winning essay this year is “The Stable Muslim Love Triangle – Triangular Desire in Black Muslim Romance Fiction," by Layla Abdullah-Poulos of SUNY Empire State College: a groundbreaking study of "the amalgamation of Islamic, Black American, and American notions of love, courtship, and sexual dialogue" in this emerging textual corpus.
As the winning essay, "The Stable Muslim Love Triangle" will receive a $250 USD cash prize and be published in the peer-reviewed Journal of Popular Romance Studies. Abdullah-Poulos will also join the the panel of judges for next year's Francis Award.
The Francis Award is in honor of Conseula Francis, whose work on popular romance fiction focused on African American authors and representations of Black love. Essays submitted to the competition may focus on work in any medium (e.g., fiction, film, TV, music, comics, or advice literature) or on topics related to real-world courtship, dating, relationships, and love; priority for the Francis Award will be given to manuscripts that address the diversity of, and diversities within, popular romance and romantic love culture: e.g., diversity of race, ethnicity, gender, religion, class, sexuality, disability, or age.
Associate provost and professor of English and African American Studies at the College of Charleston, Francis was the author of The Critical Reception of James Baldwin: 1963-2010 (2014) and the editor of Conversations with Octavia Butler (2009). In 2010, she was awarded a research grant by the Romance Writers of America for “Uncommon Pleasures: Textual Pleasure and Female Sexual Agency in Contemporary African American Romance and Erotica,” a project focused on the work of Beverly Jenkins and Zane. An essay drawn from this research, “Flipping the Script: Romancing Zane’s Urban Erotica,” was published shortly before her death in Romance Fiction and American Culture: Love as the Practice of Freedom?  Francis wrote about Zane for the NEH-funded Popular Romance Project, as well as about romantic representations of Barack and Michelle Obama during the 2012 presidential campaign.
The annual deadline for submissions for the Francis Award is December 1, and the winner will be announced in April or May of the following year.  All submissions should be sent to Erin Young, Managing Editor of the Journal of Popular Romance Studies, at managing.editor@jprstudies.org. Please put “Francis Award” in your subject line.  All submissions must be Microsoft Word documents, with citations in MLA format; in keeping with JPRS publication guidelines we will consider essays of 5000 to ~10,000 words in length.  Please remove your name or the name of any co-authors from the submitted manuscript; in your cover-letter email, please provide your contact information (address, phone number, e-mail address) and a 150-200 word abstract of the submission.
The judges for the Francis Award will be a mix of established and emerging scholars in the field of Popular Romance Studies, chosen by IASPR; each winner will be invited to join the judging team for the following year.
Posted by E. M. Selinger at Thursday, May 04, 2017 0 comments