Iwai, Gaku, 2015.
"Wartime Ideology in 'The Thimble': A Comparative Study of Popular Wartime Romance and the Anti-romance of D. H. Lawrence." Études Lawrenciennes 46.
Kempf, Rachel Erin, 2015.
"Dirty Words: The Writing Process of 'Smutshop'." The University of Texas at Austin, Master of Fine Arts. ["I worked at Siren-BookStop, Inc. for three years, cleaning up manuscripts and penning gay werewolf erotica [...] It was the best and worst job I’ve ever had — the best because I got paid to write and spend my workday making dirty jokes, and the worst because real sex isn’t porn sex, and real women aren’t romance heroines, and love and relationships are messy and complicated and when you spend all day boxing it into the confines of a highly formulaic genre, you’re bound to start getting some messed-up ideas about how your love life ought to be"]
Meyer, Michaela D. E., 2015.
"Living the Romance through Castle: Exploring Autoethnography, Popular Culture and Romantic Television Narratives". The Popular Culture Studies Journal 3.1&2: 245-269. [This includes a discussion of romance fiction, not just television romantic narratives]

Romance Research in the Canary Islands and Australia

The novels in this corpus are all set, wholly or partially, in the Atlantic islands (mostly the Canaries) and are written by English Harlequin/ Mills & Boon female authors. The project begins with a corpus of 20 novels set in the Canaries, while the corpus on Madeira and other islands has just begun to be built, including only 2 novels at the moment. The texts cover a time span of almost five decades, from 1958 to 2004, which allows for an analysis of the evolution of their discourse.

The protagonists are usually a native islander hero, or an Englishman with local ancestors, who falls in Jove with an English heroine who either visits or settles temporarily on one of the islands, which are typically described as a paradise with very different sociocultural traditions. Both the narrator and the characters are aware of the sociocultural and linguistic differences and often make reference to them. This provides an interesting framework and material to carry out a variety of analyses related to a number of challenging issues, including identity and otherness, paradise discourse, and intercultural and even linguistic contact, since the texts are written in English but interspersed with Spanish and Canarian (also Portuguese) terms and expressions. These words and phrases perform different communicative functions and reach a wide international readership who become familiar with them. This may contribute, to some extent, to their diffusion and eventual adoption by readers of English or other speech communities, as González-Cruz (2011b) has argued. [...]

In short, our purposes in this Research Projects are as follows:


-----
I don't know which novels are included in the 20-book corpus. Can you think of any books you think should be included? I can pass on any suggestions.
----- 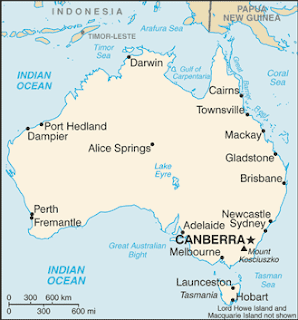 
part of a research team just awarded a 3-year (2016-2018) Australia Research Council (ARC) Discovery Project grant of A$316,000 to study 21st-century Australian popular fiction, including romance. This interdisciplinary project brings together researchers from the University of Queensland (Kim Wilkins, David Carter), the University of Melbourne (Beth Driscoll), and the University of Tasmania (me).

The maps of Australia and the Canary Islands came from Wikimedia Commons and are either in the public domain or made available under a Creative Commons licence.
Posted by Laura Vivanco at Sunday, November 08, 2015 2 comments