Congress vs. the Popular Romance Project 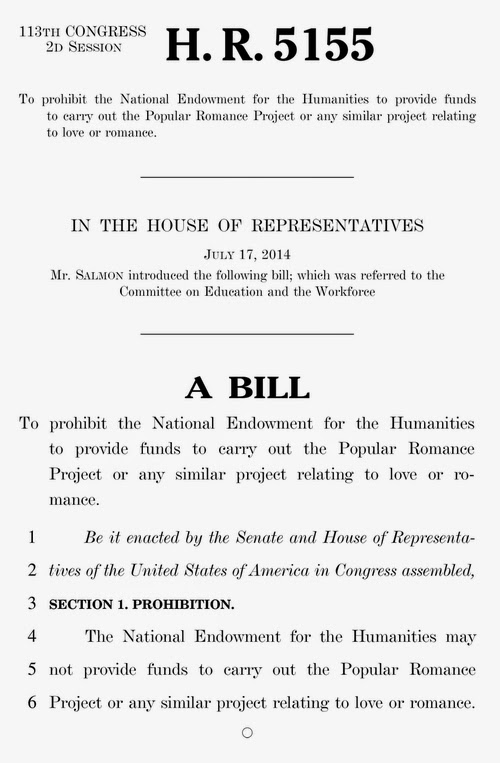 I hadn't realized things had gone this far.  A bill was introduced in Congress last summer to strip NEH funding from the Popular Romance Project, and also prohibit funds from the NEH for "any similar project relating to love and romance."

The bill did not pass, but it clearly sent shivers up the collective spine of the NEH, and as the Romance Novels for Feminists blog reported last week, "NEH funding for the PRP web site has been put on hold."  (If you were wondering why the site went on hiatus a few months ago--well, now you know.)

I've been waiting for the right moment to propose an NEH summer seminar or institute for faculty about popular romance fiction, but politically speaking, that moment may have passed.  A pity.  As a scholarly adviser to the Project, I've always thought--and continue to think--that this is one of those rare projects that brings top notch humanities scholarship to bear on a topic of broad and democratic interest.

I hope the pendulum swings back someday; in the meantime, the documentary film that Laurie Kahn has made looks to be very interesting, and the loss of website funding won't stop the film from getting done and out to the public.  More about the film, the funding fracas, and the upcoming popular romance symposium at the Library of Congress, at the new, separate "Love Between the Covers" website.
Posted by E. M. Selinger at Tuesday, December 30, 2014 2 comments

If you haven't already seen it, you might like to take a look at Jo Beverley's interview with "Dr. Catherine Roach [...] Professor of Gender and Cultural Studies at the University of Alabama." They discuss feminism, defining features of the romance genre, historical romance and more.


Catherine, your next point is "Romance entails faith in love as a positive force for the good in many people's lives. In this sense, love functions as religion." I'll confess that I'm not comfortable with the word '"religion." Could it be stated as hope?

Catherine: Yes, you could rephrase to say that romantic love offers hope. My point is that the romance story believes there is an answer to existential problems of loneliness and suffering and that the answer is love. Romance is a hopeful and optimistic form of fiction that stakes its claim on the belief that the world is a good place. Despite all of life’s injustice, both love and love stories make the world a better place. The genre is life affirming.

I see. Yes, there is a necessary belief, and I have it. It's one reason I write romance.
(Reader -- are you a believer? Is it part of why you love to read romance?)

You can read the rest over at The Word Wenches blog.
Posted by Laura Vivanco at Saturday, December 13, 2014 0 comments

Library of Congress to host Conference on Romance Fiction

As stated in a press release from the Library of Congress


"What Is Love? Romance Fiction in the Digital Age," an international, multimedia conference, will be hosted by the Center for the Book in the Library of Congress on Tuesday, Feb. 10, and Wednesday, Feb. 11, 2015.

The conference, which is free and open to the public, is made possible through the generous support of lead sponsor Harlequin, a worldwide publisher of books that are printed in 34 languages and sold in 102 international markets.

Romance fiction is the second-best-selling genre in the publishing industry, generating more than $1 billion in publisher revenues in 2013, according to Bookstats. Romance accounts for 21 percent of the adult fiction market.

"This two-day gathering will unite authors, scholars and fans to explore the changing dynamics of the genre, its relevance in popular culture and how digital technology is shaping the future of romance fiction," said John Y. Cole, director of the Center for the Book.

"Our conference will include business and social interests and influences, romance literature scholarship and public engagement with people who love the genre," he said. "We are grateful to Harlequin for its generous sponsorship of this conference." Additional support is provided by the Popular Romance Project, created by the Center for New History and Media at George Mason University; the Nora Roberts Foundation; the Romance Writers of America; and Berkley/NAL, imprints of Penguin Random House.

"Harlequin has been in the business of romance for over 65 years, bringing love stories to women wherever, however and whenever they want to shop," said Craig Swinwood, publisher and chief executive officer at Harlequin. "We are thrilled to be partnering with the Center for the Book in the Library of Congress on such an important conference that will spotlight the importance of romance fiction and feature marquee authors from the genre."

The Popular Romance Project, led by Laurie Kahn of Blueberry Hill Productions, will also include the feature-length documentary film "Love Between the Covers," directed by Kahn. There will be a preview of the film at the Library of Congress on the evening of Feb. 10.

The conference agenda will include panels moderated by Pam Regis, professor of English at McDaniel College and president of the International Association for the Study of Popular Romance; Bill Gleason of Princeton University; Mary Bly of Fordham University (who writes as Eloisa James) and Sarah S.G. Frantz. Special author appearances include New York Times best-selling authors Robyn Carr and Brenda Jackson.