The IASPR conference began this morning in York. There's live-tweeting going on and you can download a pdf of Dr Nick Redfern's paper, "The romance film at the box office in five European countries, 2006 to 2010" from his blog. His

Out Now: My Essay on Feminism and Romance

I'm delighted to be able to announce that, at long last, "Feminism and Early Twenty-First Century Harlequin Mills & Boon Romances," an article which began its life as a paper given at the 20th annual Feminist & Women’s Studies Association (UK & Ireland) Conference in 2007, has been published in the Journal of Popular Culture. You can read the first page here and I discuss it in a little bit more detail at my blog.

And while I'm on the topic of feminism and romance, I'd like to take the opportunity to mention Jackie C. Horne's new blog: Romance Novels for Feminists. Here's her post explaining who she is and why she's writing about romances and feminism.
----
Vivanco, Laura. "Feminism and Early Twenty-First Century Harlequin Mills & Boon Romances." Journal of Popular Culture 45.5 (2012): 1060–1089.
Posted by Laura Vivanco at Tuesday, September 25, 2012 5 comments

On the 24th of November An Goris will be in Birmingham (UK) giving a talk at the second workshop organised by the interdisciplinary Genre Studies Network. This workshop is focused on genre, gender and identity.

The more information humans have to deal with on a daily basis and the faster they have to do it, the stronger their need is for effective means of ordering information. Genre as taxonomy fulfils this human need. Genre is used to structure information, to create meaning, and to make sense of reality. These are only a few of the many questions that the genre studies network will address:


The dates, topics and locations of the workshops are as follows:

All workshops are open to everyone and are free but places are limited. If you are interested in attending please email the organiser, Natasha Rulyova, at n.e.rulyova@bham.ac.uk

Over at OnFiction Raymond A. Mar reports on some new research about reading:


We all know people who are heavily influenced by whatever they happen to be reading or watching, crying at the drop of a hat. On the other hand, there are those who seem to have no difficulty withdrawing from a narrative world, seemingly unfazed by sad films and scary books. One interesting avenue of work has found that those who are intrigued by puzzles and enjoy complicated problem-solving--a trait known as “need for cognition”--are also more likely to be deeply engaged with a story. [...] In other words, the complexities of a narrative appear to be just another puzzle that some people enjoy unlocking.


The photo is the work of Matěj Baťha who made it available via Wikimedia Commons with a Creative Commons licence.
Posted by Laura Vivanco at Tuesday, September 18, 2012 1 comments

I've always been very happy to read long excerpts from other people's works so this isn't a complaint, but I am a little bit stunned by the size of the preview of For Love and Money which has been made available by Google Books; it seems to be over a fifth of the total. Presumably when it's your own work you have a better impression of quite how long the excerpt is relative to the total.

If you haven't read For Love and Money but would be interested in seeing the introduction and an explanation of how romance novels can be written in a variety of literary modes, you can now do so for free.

While I'm on the topic of Google Books, I may as well mention that page 352 of the tenth edition of A Glossary of Literary Terms includes the following about romance novels:


The history and analysis of this novelistic form has increasingly become the subject of scholarly investigation; it now has its own literary periodical, the Journal of Popular Romance Studies, begun in 2010. Refer to Carol Thurston, The Romance Revolution (1987); and Pamela Regis, A Natural History of the Romance Novel (2003).

I'm pleased to see that JPRS is beginning to beginning to be more widely known and I'm also pleased (and very intrigued) by the fact that the Glossary has chosen to highlight Pam Regis and Carol Thurston's studies of the romance. I wonder if we can take it as a sign that at long last Janice Radway's Reading the Romance has lost its preeminent position.
Posted by Laura Vivanco at Thursday, September 13, 2012 3 comments

Joint Conference: Curtin University and the Romance Writers of Australia

Reading and Writing Romance in the 21st Century


Here are some details from the Romance Writers of Australia:

The keynote speaker is Professor Imelda Whelehan. The call for papers is as follows:

The meaning of ‘romance fiction’ in the twenty first century has become complex, diverse and wide-ranging. At a time when the future of books, reading and fiction are hotly debated topics, the many sub-genres of romance (and romance-driven general fiction) continue to be bestsellers. In light of its continued popularity, as well as increasing academic and critical attention, it is timely to consider how our understandings of romance fiction have changed. So too, we might consider the way in which the constitution, demands and desires of its audience has shifted. For, just as there is more than one type of romance, it is becoming clear that there is more than one type of romance reader.

This conference invites papers that explore the notion of reading and writing romance in the twenty first century. Whilst the genre of contemporary romance fiction is the main focus, we also welcome contributions that situate romance fiction in its historical context, or explore its place in mainstream and literary fiction. We particularly welcome papers that focus on Australian authors and audiences.

Among the questions the conference seeks to ask are: Has the increased connectivity and social networking enabled by the internet and e-publishing helped bring romance fiction into the mainstream? Or have its readers just become more vocal, connected and better able to share their passion? How well does contemporary romance fiction reflect shifts in relationships, marriage and sexuality? Is romance fiction bound to reflect normative social narratives, or can it offer more challenging representations of gender, race, sexuality and class? To what extent does contemporary romance fiction reflect key socio-political concerns such as indigenous issues, ethnicity, multiculturalism or Pacific Rim relations?

Suggested topics include (but are not limited to):

Abstracts of no more than 300 words are due by January 11th 2013 [...] Successful submissions will be invited to submit full papers for consideration for publication in a special issue of The Australasian Journal of Popular Culture (full papers due June 2013).


Full details here. If you'd like to stay informed about the conference, you can subscribe to the Elizabeth Jolley Conference blog.

Laura Vivanco
According to the Deccan Chronicle,


Shoma Narayanan is the first Indian author to become part of the Harlequin Mills & Boon banner, with her maiden novel Monsoon Wedding Fever. [...] Leaving a cushy financial background for the creative life of a writer has been quite a leap for Shoma. “I was a little apprehensive initially, but I had decided to follow my dream — which is to write,” she explains. Her novel, which is set in India, is quite contemporary. “I had to keep in mind what would sell with the global audience, which is why I decided to set the plot in India,” she says.

In an interview with The Awesome Sisters she explained how she came to be published:


I saw an ad at Crossword that said Mills and Boon was ‘auditioning’ for Indian authors – I went home and wrote a short story for them, and submitted it. My story went on to become one of the three shortlisted winners of the ‘Passions’ contest, and I was assigned an editor in the UK with whom I began working on the final novel. It was only when I’d almost finished the novel that Anna (my editor) told me that my book was going to be a global release – if Anna hadn’t been safely tucked away in a different continent, I’d have run across and hugged her – even over the phone, it took her around ten minutes to get me to calm down!

You can read an excerpt of Monsoon Wedding Fever here. 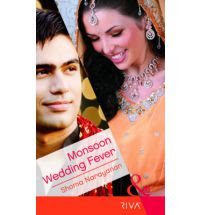 Unfortunately I can't work out when Monsoon Wedding Fever is going to be published or whether, in fact, it's already been published. I've managed to track down an image of the UK Mills & Boon cover and according to the details at The Book Depository this edition was published on 1 August 2012. Amazon UK shows the same cover, gives a publication date of 3 August 2012, but lists the book as "not yet released." The RIVA line's recently been reorganised and I can't find any details about the book on Mills & Boon's website. 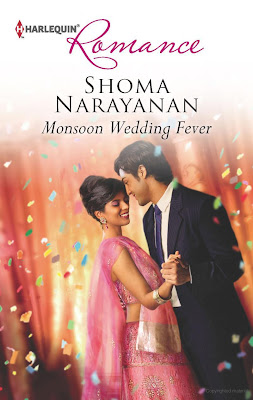 The Harlequin edition is also something of a mystery. Amazon.com has it listed as due for publication on 30 October 2012 but it doesn't seem to be listed at Harlequin's website in the list of October novels in the Romance line.

Can anyone clear up the mystery? I hope so, because having seen the excerpt I'd like to read the rest. Or, given earlier discussions about cover art and the representation of non-white protagonists, does anyone fancy giving me their opinion of the covers?

Sarah Frantz was quoted yesterday in the Ventury County Star. Speaking about Fifty Shades of Grey, she states that


"The sex is compelling. Sex is always compelling. But the 18th-century scholar in me says nothing (E.L. James) has done is new, apart from having 20,000 fan fiction followers ready to buy the book the instant it was available," said Sarah Frantz, president of the International Association for the Study of Popular Romance and an associate professor of literature at Fayetteville State University in North Carolina.

"She is using many of the conventions and tropes of romantic fiction, including the Byronic hero who has committed nameless crimes in the past who will be cured by the love of a good woman," Frantz added. 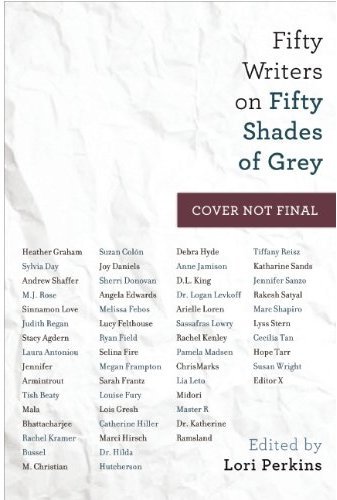 The term is an acronym for bondage-discipline/dominance-submission/sadism-masochism, themes that James delves into in the "Fifty Shades" trilogy — albeit inaccurately, Frantz said.

Fifty Writers on Fifty Shades of Grey will be published by BenBella Books and is edited by Lori Perkins.
Posted by Laura Vivanco at Sunday, September 02, 2012 1 comments