Jackie C. Horne has summarised the keynote speeches (by Kay Mussell and Jennifer Crusie) and round-table discussion (the participant whose contribution is most noted is Eloisa James) at the The Popular Romance Author Symposium.
Posted by Laura Vivanco at Wednesday, October 30, 2013 0 comments

Chelsea Ann Pierce's recent MA thesis is on the topic of "The Apprenticeship of Laurell K. Hamilton: How Aspiring Writers Learn to Write."

The Princeton Symposium on Authorship in the Popular Romance Genre , whose participants also focus on authors, will be starting in a few days' time. On Friday attendees will be able to hear:


It may be easy enough to see connections between popular romance written today and the novels of Jane Austen, but how do we explain how one leads through centuries and across oceans to the other?   How do we present a history of women’s romance without exploring and establishing links to other writers, traditions, and events?

Maryan Wherry on “Adventure, Mystery, Romance: The Voice and Style of Mary Stewart”


Mary Stewart is an important transition figure within 20th century romance. [...] Stewart combines the neo-gothic traditions of Daphne du Maurier and Victoria Holt with the traditional mysteries of Georgette Heyer and Mary Robert Rinehart to establish the foundations of the romantic suspense subgenre.

Hsu-Ming Teo on “'Everyone loves a Lindsey!': Evaluating the Historical Romance Oeuvre of Johanna Lindsey”


Together with her well-known contemporaries Kathleen Woodiwiss, Rosemary Rogers and Bertrice Small, Lindsey’s work was an integral part of the ‘Romance Revolution’ which injected sizzling sex scenes into the pages of the romance novel. It was a revolution that contributed to the Americanization of the twentieth-century romance novel.


This talk will take a closer look at romance writers’ relationship to feminism during the past twenty years, not by analyzing their novels, but by looking at their interviews and critical writings on the craft of romance.


Writers reacted to the sneers and leers in two opposing ways. Some accepted the invitation and displayed personalized aspects of their sexuality for shock value, career promotion, or to reclaim control of defining their sexual selves in a patriarchal culture. Others contested the assumption that their personal sex lives were relevant to their work and chastised outsiders for intruding on their privacy.

Annette Couch-Jareb, “Self-Publishing and the Individual Author as an Agent of Change”


In recent years, publishing has undergone a revolution, as dramatic as the invention of the Guttenberg Press. For the first time, authors are able to publish without the gatekeeping effects of publishers.

Jayashree Kamble, “Defiance and Definition: Constructing Authorship in Lisa Kleypas’s Dreaming of You”

Kleypas’s Sara Fielding (whose name evokes a history of women authors) is a claim of authorial self-determination in a genre that is constantly battling for the right to define what it is (and is not).

Eric Selinger, “The World Split Open, Slightly; Or, I Fought the Law and the Law Spanked”


This consoling narrative [Victoria Dahl's Talk Me Down], in which the truths told by romance can be easily and pleasurably recuperated, contrasts in several ways with the representations of gender, truth-telling, and the law in Dahl’s Twitter and Tumblr posts, which include impassioned, explicitly political reflections on gendered poverty, abortion rights, and access to birth control.

Gabaldon uses her position as the author to offer the “correct” interpretation to readers’ questions, all while creating an online persona that is friendly to those who agree with her, but caustic to those who do not. Her answers often require her to provide information that would not have been available to the reader, thus allowing her to extend her narratives beyond the novels themselves. In other words, her online forum allows her to keep writing her novels and position herself as the leading authority on them.

The full abstracts for all of these talks can be found here.
Posted by Laura Vivanco at Tuesday, October 22, 2013 0 comments 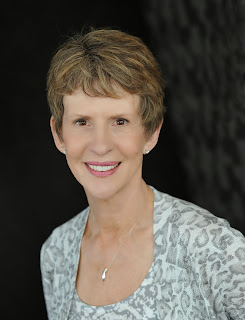 Some very exciting news:  bestselling author Susan Elizabeth Phillips will be coming to the Romance Area at this year's PCA national conference in my home town, Chicago.  She'll be chatting with Pamela Regis and me about her work and about the genre, so if there's anything you've always wanted a romance scholar to ask her, let me know!

The deadline for proposals is early this year, November 1, so don't wait--get those submissions in soon.

We've broadened out the Call for Papers somewhat--not really a change in substance, but an emphasis on inclusiveness, in terms of the media we cover.  In case you missed it earlier, here's the gist:

The discourse of romantic love permeates popular culture.  The Romance area includes papers on love, romance, and relationships, in real life and as represented in any medium, now and in the past.  From ad campaigns to Supreme Court decisions, Dan Savage to Sweet Savage Love, K-Pop to qawwali,:  if it’s about love, it’s a welcome topic at the PCA Romance area.

We will consider proposals for individual papers, sessions organized around a theme, and special panels. Sessions are scheduled in 90-minute slots, typically with four 15-minute papers or speakers per standard session, with the remaining time available for discussion.

If you are involved in the creative industry of popular romance and are interested in speaking on your own work or on developments in popular romance culture, please contact us!

Some possible topics include:

As we do every year, the Romance area will meet in a special Open Forum to discuss upcoming conferences, work in progress, and the future of the field of Popular Romance Studies.  All are welcome to attend.

Please feel free to repost this, send it to colleagues and students, Tweet it, link to it, toss it in your Tumblr feed, whatever you like, to get the word out--and I hope we'll see you there!
Posted by E. M. Selinger at Friday, October 18, 2013 0 comments 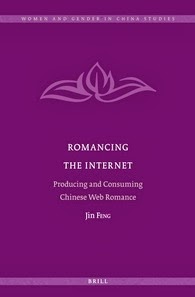 Jin Feng's Romancing the Internet: Producing and Consuming Chinese Web Romance has been published by Brill and in it

More details can be found on Brill's website and an excerpt is available here.

Since this is a long post, I thought I'd start with a short list of the CFPs in order of their submission deadlines:

I don't think they had Harlequin in mind when they put out their call for papers, but it does fit the topic:


We encourage analysis of cultural texts, phenomena, and industries both in terms of how they might operate differently in Canada and the United States and the ways in which they might straddle, or ignore, the border altogether. We invite proposals on both contemporary and historical cultural texts and contexts.

Although submissions on any relevant area of interest are welcome, we particularly welcome papers focusing on the following in a cross-border and/or comparative context:

This three-day interdisciplinary conference will trace the representation of the country house in British literature and film between 1914 and 2014. The conference will explore how space, class and gender operate in the wealth of filmic and literary texts which have been concerned with the country house throughout the last century, as well as considering how it functions in documentaries, historical monographs and reality television. We invite 300-word abstracts (for 20-minute papers) on any topic relating to the country house.

There's specific mention of "Romance Fiction." Abstracts should be submitted via email to countryhouseconf@ncl.ac.uk by 1 November 2013. More details here.

This conference seeks to challenge popular conceptions and perceptions of sexuality and disability. In addition to academic papers, we are particularly interested in opening up a space for the discussion of personal experiences of disability and sexuality and the role of sex workers, community programs and the work of sex educators. Inter-disciplinary and cross-disciplinary perspectives are sought on sexuality and disability, including cross-cultural and transcultural perspectives. Non-traditional presentations are encouraged including workshops, performances and round table discussions.

Proposals are invited for essays which explore non-normative representations of gender and sexuality in a range of contemporary popular fantasy, including, but not limited to: tv episodes and series, films, computer games and MMORPGs, novels and short stories, comics and graphic novels, role-playing games and fanfiction. [...]

This collection will consider the ways in which contemporary writers, artists, directors and producers use the opportunities offered by popular fantasy to exceed or challenge gender and sexuality norms. In contrast to many claims made about the fantasy genre being necessarily conservative/reactionary, this collection will explore the ways in which this genre can be and is being used to reflect on the contingency of our gender and sexuality norms. With this in mind, proposals are invited for essays of c.7000 words.

It may also be of interest that Jude Roberts is looking for papers on much the same topic for "a panel on the academic track at Loncon3 – the 72nd World Science Fiction Convention" which will be held in London from Thursday 14 to Monday 18 August 2014. Please send a 300 word abstract and brief biography to j.roberts@bbk.ac.uk by 1st December 2013. More details here.

In 2015, a special issue of MELUS will showcase under-studied aspects of black print culture studies or book history. We are seeking scholarship that addresses, but is not limited to, the following questions:

• How are contemporary print matters—ranging from concerns such as the publication of new print editions of literary texts by emergent and historical US black writers to online and open access publishing as well as to the operations of the mainstream publishing industry—shaping our understanding of what African American literature is becoming?

The second Lodz Fantastic Literature Conference aims to bring together experts in folklore, medieval and early modern literature and culture as well as contemporary fantasy literature to explore the fascinating relationship between supernatural creatures and humankind. For centuries these creatures have been seen in both positive and negative light – sometimes as benevolent neighbours, many a time as dangerous folk to interfere with, at other times still as tricksters positioned outside of the traditional dichotomy of friend or foe. Their cultural presence is a force to be reckoned within the study of pre-modern, modern as well as post-modern literature, and the current fascination of popular culture with their history and nature begs ever new questions about why they continue to seem so indispensible to us.

We would like to invite contributions that address the nature and function of the beliefs of past eras, their postmodern transformations, and especially those which trace the (dis)continuities in the ways in which these creatures have been imagined and perceived over the ages.

Submissions of topics and abstracts (300-400 words) should reach the organisers no later than January 31st, 2014. More details here.
Posted by Laura Vivanco at Friday, October 04, 2013 1 comments