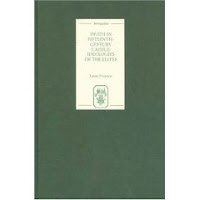 My academic work is currently focused on the romance genre but I began as a hispanomedievalist, writing about death in fifteenth-century Castile as well as texts such as Celestina and the Spanish sentimental romances which are about love, but which definitely don't conclude with a Harlequin Mills & Boon happy ending.

In ‘“So educational!” she said. “And quite unexceptionable!”: The Nonesuch as Didactic Love Fiction’ I began by suggesting that one could compare The Nonesuch itself to the presents, described in The Nonesuch as “a book, or some trifle,” which Sir Waldo brings to “amuse” Charlotte Underhill during her convalescence. When Mrs Mickleby, learning of these presents, launches a brief attack on “romances,” Ancilla Trent defends some of them as being “well-written” and I believe that Heyer would have been very happy to accept this as a description of her own novels.

Ancilla continues by noting that a puzzle Sir Waldo brought Charlotte is “So educational! [...] And quite unexceptionable!” Again, this is a description which can also be applied to The Nonesuch itself. It may be deemed “quite unexceptionable!” because it is a "sweet" romance that avoids any description of sexual activity beyond a kiss, and its "educational" nature is suggested by the fact that it is a novel in which both the hero and heroine educate others.

The heroine, Ancilla Trent, is a governess and the hero, Sir Waldo, is a role model to the many young men who aspire to emulate his sporting prowess and fashionable mode of dress. Laurie and Tiffany are secondary characters who serve as demonstrations of the negative consequences of a lack of suitable education. Their bad habits and traits were learned easily, but effecting changes in their behaviour is rather more difficult and requires both knowledge and cunning on the part of their teachers. Miss Trent, for example, is described as using “unorthodox” methods, including lies, in order to guide Tiffany. Sir Waldo also uses his cunning to teach the besotted Julian about Tiffany's faults: he subtly provokes her into “betray[ing] the least amiable side of her disposition” with such skill that “His trusting young cousin” remains unaware “that Waldo’s lazy complaisance masked a grim determination to thrust a spoke into the wheel of his courtship.”1

Heyer herself can perhaps also be thought of as having employed subtle educational methods since she concealed the didactic elements of her novels beneath a highly entertaining outer layer. The authorial approval for the modest yet brave Patience Chartley, and the disapproval of the vain and selfish Tiffany, for example, serve as examples of both the right and the wrong way for a young woman “to go on in society.”

The Nonesuch can thus be classified as what Deborah Lutz terms “didactic love fiction - romance that has a didactic project, is future-directed, and attempts to represent a moral way of living ” rather than as “amatory fiction” which “cannot be, generally speaking, recuperated morally.” Sometimes “the enemy lover” of amatory fiction, “Contrary to all expectation […] appears in […] didactic fiction” (3), but when he is the hero of a work of didactic love fiction he is “set up as dangerous only to then be reformed in the end” (3). This type of hero does appear in some of Heyer's novels:

my youthful fans [...] seem (from their letters) to be convinced that my Ideal Man is the prototype of what I call the Heyer Hero, No. I pattern – a horrid type, whom no woman in the possession of her senses could endure for more than half a day (Aiken Hodge 197)

He does not, however, appear in The Nonesuch, which is therefore more completely didactic in nature.

Perhaps the most obvious aspect of Heyer's didacticism is to be found in her use of historical detail. As is apparent from the size of Jennifer Kloester's Georgette Heyer's Regency World, Heyer did include a lot of details about the Regency period in her novels. The accuracy of these details allow us to date the chronological setting of the novel very precisely to June 1816, a “couple of years” after the death of “Lady Spencer – the one that [...] was mad after educating the poor.” Heyer's attention to accuracy is also suggested by the presence in John Bigland’s Yorkshire volume of The Beauties of England and Wales (1812) of an engraving of what he calls the “Dropping Well” at Knaresborough, which may have formed the inspiration for the one spotted by Heyer’s Lord Lindeth in Leeds. Heyer also recognises the less pleasant aspects of Regency life via her mention of Leeds' charitable organisations and the presence in the novel of a “ragged urchin” who has to be reassured by Patience Chartley that he will not be handed over to “the beadle (an official of whom he seemed to stand in terror.” Again, Heyer seems to have been drawing on contemporary sources, since John Ryley in his Leeds Guide (1806) describes the beadle, along with the Chief Constable, as “personages who are, to vulgar thieves, as terrific as the Chief Justice himself” (89).2

The Nonesuch is a Regency romance populated by fictional characters but Heyer also wrote some works of biographical historical fiction, including The Conqueror (1931) and The Spanish Bride (1940). Heyer seems to have wanted to write more works of biographical historical fiction but after her death her husband revealed that “The penal burden of British taxation, coupled with the clamour of her readers for a new book, made her break off to write another Regency story.” Jennifer Kloester suggested in her presentation that there were other reasons why Heyer eventually concentrated her talents on Regency romances, and she promises that all will be revealed in her forthcoming biography of Heyer. Whatever the precise reasons, I concluded that most of us of who are fans of Heyer's work are probably very glad that circumstances pushed her to write more of these only somewhat “educational” yet “quite unexceptionable” novels.

1 I didn't mention this in my presentation, but I thought I'd note here that it's interesting that Heyer uses this particular metaphor to describe Sir Waldo's actions. Sir Waldo has a reputation as a nonpareil, a "nonesuch" at driving and it was he who taught Julian to drive. Now he takes a metaphorical spoke and pushes it into the "wheel" of Julian's courtship so as to prevent Julian from hitting a dangerous obstacle and driving off the straight and narrow path towards a respectable and happy marriage. Julian, of course, currently believes that the obstacle is his destination, and he would therefore consider the spoke-poking to be sabotage. For this reason, Sir Waldo has to use all his skill to prevent Julian from realising that his carriage is quite deliberately being redirected.

2 In my presentation I didn't have time to give more details about Heyer's description of Leeds. I hope that if/when the paper is published in full I'll be able to include more about this. I'd also like to acknowledge the assistance I received from Greta Meredith, Assistant Librarian, Thoresby Society, who kindly pointed me in the direction of useful primary and secondary sources about Leeds, and from Louise-Ann Hand, Information Librarian: Local and Family History Library, Leeds City Council, who was a fount of useful information about the streets and inns of early nineteenth-century Leeds.
Posted by Laura Vivanco at Wednesday, November 11, 2009