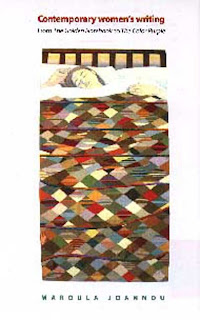 Mary Joannou is Professor of Literary History and Women's Writing at Anglia Ruskin University and she's listed in the database of researchers at "The Middlebrow Network [which] is an AHRC-funded project that provides a focus for research on the loaded and disreputable term 'middlebrow' and the areas of cultural production it purports to represent."

In ‘Heyer and Austen’ Mary Joannou noted that Jane Austen has been a very important figure for twentieth-century women authors and their debt to her was perhaps particularly intense in the 1940s. In Leavis's The Great Tradition he wrote that Austen's place in the "great tradition" of English novelists had been secured by her "marked moral intensity" but Joannou observed that he both put a premium on difficulty (and Austen is not a particularly difficult author to read) and failed to take account of her humour and use of irony.

In the 1950s postmodernism was in the ascendant but so too was Regency-set fiction. Joannou suggests that one could perhaps see Heyer's irony and humour as a signal that she was a "postmodernist avant la lettre."

Austen took comic delight in absurdity and self-delusion, and playfulness is Elizabeth Bennet's most noted characteristic. It is a similar use of humour which readers also love in Heyer. She is "fun" and her heroines are quick-witted. Heyer was writing through the Depression and the Second World War and her humour perhaps provided an antidote to the bleakness of these decades. Although there are differences between Heyer and Austen, their use of humour leapfrogs over the seriousness of the Victorian period and Joannou believes that in order for Heyer to be taken seriously, we have to see that both she and Austen were writing intellectual comedies.

Both also draw on the work of previous women writers. Austen took her cue from Maria Edgeworth and Frances Burney (Joannou sees borrowings from Burney in Pride and Prejudice), but she also parodies the gothic in Northanger Abbey. Similarly, Heyer's debt to Austen only goes so far. In The Grand Sophy, for example, the scene in Goldhanger's rooms evokes the outrageous. Austen's heroines would never have pulled out a gun the way Sophy does. Nor does Sophy's matchmaking interference much resemble Emma Woodhouse's. Emma may interfere, but she wouldn't have shot Charlbury. Austen's is only a very "partial, ironic tutelage."

So are Heyer's references to history more than "costumery"? [LV comment: this is a reference to Georg Lukács. As Lisa Fletcher has written:

Georg Lukács begins his famous study of the historical novel by discounting from his consideration those "historical novels" in which "history is ... treated as mere costumery: where it is only the curiosities and oddities of the milieu that matter, not an artistically faithful image of a concrete historical epoch" (19). (Fletcher 49) ]

The Regency was characterised by profligacy, philandering, excess. These traits find their way obliquely into Austen in the persons of Wickham and Willoughby. In Heyer sexuality is obliquely present: Barbara Childe in An Infamous Army is a femme fatale. The clergymen in Austen reveal her moral values, although not all of them are impressive. In Heyer the clergymen are different. Austen and Heyer also differ in their depiction of the gradations of society, for whereas Austen has Fanny Price and her family, Heyer concentrates on the ton and brilliant matches.

The Regency was also a period of political radicalism but neither Austen nor Heyer particularly deal with this. They pay more attention to matters of style, fashion, manners, breeding. It seems as though despite (or perhaps because of) the wartime austerity which surrounded her, Heyer was delighting in excess, and public events of the Regency era assume prominence. Austen, however, tended to avoid public events and "real solemn history" (to quote Catherine Morland) was not to her taste. She deals with the ordinary, with women's strategies for coping.

This difference illustrates the slippage that is inevitable because Heyer, in writing historical romantic fiction, was mixing romance, which tends to depict an ideal world, with history, which depicts a verifiable world. She weaves fact into her fiction and we are thus reading an artefact.

Austen's novels, however, are set in the present, so there is no need for explanations of familiar fashions. Heyer, by contrast, had to make the past seem vivid by describing such details. [LV comment: this is a point I brought up prior to the colloquium in my brief post inspired by the title of Joannou's paper]. Austen tends to draw attention to fashion when she wishes to show which people are morally worthless (e.g. Lydia). Heyer's emphasis on fashion, which has been disparaged, can be read as mocking the mainstream. It takes delight in the performative possibilities of dress which allows for game-playing. A new wardrobe of clothes is transformative, e.g. in Friday's Child. An ingenue can be transformed into a glamorous woman in this playful utopia, and fashion is bound up with dreams and yearnings. Even the word "cotillion" which Heyer used as the title for one of her novels, is the name of a dance derived from the French for "petticoats." It is not only women who are interested in Heyer's Regency world: her men can and do take an interest in fashion too, in a way which was not possible for men in the period in which Heyer was writing. This allows for some fluidity in gender, but also offers up the male body for display (and consumption by female readers).

Joannou concluded by noting that Austen's novels depict youthful heroines who enter into equal marriages in which the wife does not show deference to her husband. This is also to be found in Heyer, but her historical accuracy does not extend to the sensibility of the period or to women's feelings at the time.
Posted by Laura Vivanco at Friday, November 13, 2009