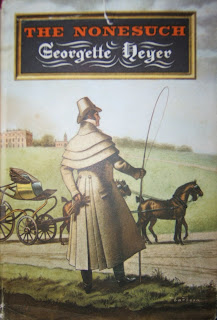 Laura Vivanco
This weekend I'm travelling (but not in the stylish conveyance depicted on the left) to Lucy Cavendish College, Cambridge, where I'll be presenting a paper on didacticism and The Nonesuch at a colloquium titled "Re-reading Georgette Heyer." I'm planning to take notes of the other speakers' presentations so that I can write up a summary when I get back. In the meantime, I thought I'd leave those not able to attend with a post about Georgette Heyer.

Lillian S. Robinson, in her 1978 essay "On Reading Trash" states that "Most of this essay will be focused on a contrast between the works of Jane Austen and those of Georgette Heyer" (202). The comparison seems to have been prompted by the way in which Heyer's novels have been marketed:

Georgette Heyer is the acknowledged Queen of the Regency romance (later paperback editions make some such peculiar claim), and it is a clear selling point to say that the book you are touting is just like "a" Georgette Heyer [...]. But for Heyer herself there can be only one predecessor sufficiently glamorous and sufficiently connected in the public mind with the Regency period and that is Jane Austen. (208)

For Robinson "the comparison can only prove disappointing" (208) yet she suggests that "Once the absurd incongruity of any connection between the two writers is duly acknowledged and assigned its proper weight, it has much to tell us about female literary experience" (202). Robinson's sense of the "absurd incongruity of any connection" between Austen and Heyer is based on her assessment of their respective literary merit (or lack of it, in the case of Heyer). Having made the comparison at some length, however, she concludes that

I can imagine no greater waste of energy than an elaborate demonstration that Jane Austen is a better writer than Georgette Heyer. In drawing so extensive a comparison between the two, my intention has not been to belabor the obvious points about what makes a great writer great. (220)

Personally, I'm rather less sure of what "obvious points" there are that make "a great writer great." I'm fairly sure that some of the writers who've been acclaimed as "great" in one period have gone out of fashion in others, so I'd have been interested to know the criteria by which Robinson judged greatness.

In her essay, the "extensive [...] comparison" she makes focuses on the differing ways in which Heyer and Austen present details of customs, dress, etc. Heyer's novels, Robinson states, "concentrate on precisely those minutiae of dress and décor that Austen takes for granted" (208). Can the presence of such details be sufficient to determine a lack of "greatness"? Robinson describes this sort of material in Heyer's novels as "pseudoinformation not because it is untrue [...] but because, ultimately, it reveals nothing about the society that fostered an institution like Almacks as its elite marriage market" (212) whereas Austen "communicates a far more vivid sense than we can attain to of the daily reality" (216) of life in the Regency period. I think this perhaps underestimates the amount and variety of historical information that Heyer's novels do convey about the Regency period. The "pseudoinformation" collected and organised by Jennifer Kloester (who will also be at the Heyer colloquium this weekend) in Georgette Heyer's Regency World makes for quite a substantial book. Heyer's information may not be of the type that most interests Robinson, but I think she goes too far in labeling it "pseudoinformation."

In addition, that Austen can convey a "vivid sense [...] of the daily reality" of living in the Regency period must surely be ascribed, at least in part, to the fact that Austen was writing contemporary novels, for a contemporary audience. Heyer was writing historical fiction, for a modern audience, a fact of which Robinson is well aware. Sarah Bower (2004) has noted that

Madame Bovary, Jane Eyre and Pride and Prejudice are not historical novels; their authors were writing about their own contemporary society, though, thanks largely to Andrew Davies, we are inclined to categorise them as period or costume dramas. The difference is, I think, self-evident.

Bower, however, does not seem to have found it so entirely self-evident as to make her own work superfluous, and her essay explores some of the ways in which "historical setting can heighten the effect of the romance." One of the ways derives from

the physical attributes of this “other country” called the past [which] can have an important role in raising the temperature of a romance. [...] What could be more romantic than Ivanhoe, armed and visored, under the escutcheon of the Disinherited Knight, tilting for love and English honour in the lists at Ashby de la Zouche?

As for the "pseudoinformation" so scorned by Robinson, Helen Hughes's response, as summarised by Sallie McNamara, might be that it owes its presence to the different requirements of historical fiction: "She argues that the language used, details of clothing, and so on, relating to the period, create a sense of verisimilitude" (85). Robinson acknowledges that they do serve this purpose but phrases her recognition of this in pejorative language:

Heyer [...] tells us about colors, cut, fabric, and trimming, [...] not only because the acquisition and display of clothing are more central to the existence of Heyer's heroines than they are to Austen's, but in order to invest the novels with that meretricious quality Henry James would have called "the tone of time." (208)

If Robinson had wished to compare like with like, she could perhaps have compared Heyer's novels to texts such as Sir Walter Scott's historical novels (including Ivanhoe, the novel mentioned by Bower), some of which were published before Austen's death but were set in much more distant historical periods. Robinson does not do so, however, and her insistence on comparing works of contemporary fiction with works of historical fiction, and then denigrating the latter because they are less authentic in representing the period in question than the former, suggests an inherent preference for contemporary fiction which neither Heyer nor any other author of historical fiction could entirely overcome. Robinson believes that

since historical fiction almost invariably takes the position that progress is desirable and that which in character, taste, or judgment most resembles present Western civilization is best of all, the context is created for a melioristic approach to historical process. At the same time, human personality tends to be portrayed as static, in that the most admirable and heroic characters have a modern view of themselves and what happens to them. The general impression one comes away with is that things used to be different (harder) for women way back then (whenever), but that women themselves were precisely the same [...] in what they needed, asked, or found in life. (207)

I think Robinson is correct in believing that historical fiction may have much to tell a careful reader about the period in which it was written but she gives little evidence to support her assertion that "historical fiction almost invariably takes the position that progress is desirable and that which in character, taste, or judgment most resembles present Western civilization is best of all." Perhaps some, if not all, offer authors and readers space to make comparisons between the past and the present which are less conclusively in favour of modernity. Sallie McNamara suggests that

The historical romance offers distance from the period in which it is written. Anxieties or tensions in relation to the contemporary society (of gender and sexuality) can be reworked within a constructed historical setting. (84-85)

Jane Austen may have been "aware that new social forces do encroach on the way of life - prosperous, decorous, and cultivated - that is the common heritage of Mansfield, Pemberly, Hartfield, Kellynch, Norland, and Northanger" (Robinson 214) but Heyer was also aware of "new social forces" encroaching, as is evident from her statement that she was "made violently unwell by the reflection that I am being forced to contribute towards a Welfare State of which I utterly Disapprove" (Aiken Hodge 122). Heyer, it would seem, did not believe that "present Western civilization is best of all," at least not in all respects. Sir Walter Scott, too, may have expressed in his novels some of the "Anxieties or tensions" which existed in his period. Sandra Schwab believes that "Sir Walter Scott, whose historical novels filled with knights, adventure and romance (Ivanhoe anybody?), certainly has to shoulder a large part of the blame" for Victorian medievalism which sought to "revive the spirit of the Middle Ages, the great ideals of "the days of old when knights were bold" (or at least what were thought to be the ideals of the knights of old)--in one word: CHIVALRY." Historical fiction which seeks to revive the spirit of an earlier age can surely not be read as an unambiguously triumphant statement to the effect that "progress is desirable and that which in character, taste, or judgment most resembles present Western civilization is best of all" (Robinson 207).

Historical fiction, then, while it may seek to teach the reader something about the period in which it is set, or at least be full of "pseudoinformation" may also, obliquely, suggest much about its authors' views of their own historical period, and those views may be rather more varied than Robinson seems to have recognised.