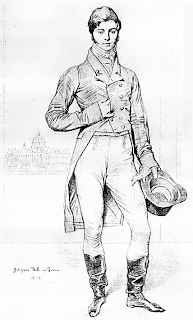 The RITA finalists for 2007 have been announced and this year there will be no 'Best Regency Romance' awarded at the Romance Writers of America's RITA ceremony. The guidelines for this category were as follows:

Best Regency Romance
Romantic historical novels with primary settings during the Regency period, typically 1795-1840. The word count for these novels is 40,000-85,000 words.

Judging guidelines: The category includes comedy of manners as well as darker stories, and the books may contain a variety of story elements, such as sexual content, paranormal elements, mystery, suspense, adventure, and non-traditional settings. (RWA)

According to The Nonesuch, 'Signet had the longest running Regency series, beginning in the late 1970s and ending in February of 2006' and 'Zebra began publishing Regencies in the mid-1980s. [...] Zebra stopped its traditional Regency line in October 2005'. Given the disappearance of these print 'traditional Regency' lines it presumably seemed more practical to include any shorter regency novels in the 'Best Short Historical Romance' category since 'The word count for these novels is 40,000-95,000 words'.

The tone and content of Regency romances was summarised by Jo Beverley in a piece at AAR which focused on this sub-genre:

Beverley says that before the birth of the Regency historical,"It was a given that books set in Regency society were in that sub-genre 'Regency Romance.' This sub-genre was marked by storylines that were located within the English upper class (rarely if ever were the principals Scottish, Irish, or Welsh) and character behaviour that stayed within that society's rules, more or less. If characters behaved otherwise there were consequences, or at least the risk of consequences, so they had to be discreet. This led to there being very little explicit sex as most books were courtship books, but limited sex became a mark of the genre and I'm not sure why. I think it has to be because the roots were clearly Heyer and more distantly, the Austen angle on the Regency."

Jo Beverley's got some short stories on her website and although they're much shorter then a traditional Regency romance, they have a very 'trad Regency' feel to them. The Duke's Solution and The Christmas Wedding Gambit are both very Heyer-ish and both feature characters who are not quite what they first seem. Beverley's Jane Austen and the Mistletoe Kiss, as its name suggests, pays homage to Austen.

The traditional Regencies haven't vanished for ever, though. Many of the older Regency romances are being republished by Belgrave House in ebook format (they also offer a free novella, Lady Bountiful, by Laura Matthews, though you do need to email them an order before you can read it). Some new ones are still being published by Harlequin/Mills & Boon, while other new Regency romances are appearing in e-book format. Cerridwen Press has a small Regency line named Cotillion. Lesley-Anne McLeod has been published in ebook format by Awe-Struck E-Books and Uncial Press, and she has some free short stories here.

The illustrations are of a lady wearing 1815 walking costume, from Ackermann's Repository (at Wikipedia), and a sketch of Lord Grantham by J.A.D. Ingres, 1816, also from Wikipedia. In this context I think the lady looks as though she's been highly distressed by the ending of the Regency romance lines, or it may be that she's upset that Lord Grantham isn't paying her any attention.
Posted by Laura Vivanco at Thursday, March 29, 2007