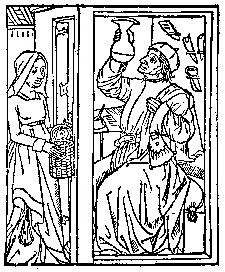 'Lovesickness' wasn't always thought of as just a metaphor. In the Middle Ages authoritative sources which were thought to justify the classification of lovesickness as a real disease included the works of Ovid, which 'taught that sickness could be an artful strategy in the game of love, and that unwanted love could be cured by his remedies' (Wack 1990: 15) and

the story of Amnon and Thamar in 2 Samuel 13 (2 Kings in the Vulgate) and the refrain in Canticles, “for I am sick with love” (Cant. 2.5, 5.8).
The biblical episode of Amnon’s love for his sister Thamar both portrayed the reality of lovesickness and, in its narrative details, offered a vision of the disease that overlapped with those of medicine and secular literature. (Wack 1990: 19)

Medieval physicians were of the opinion that love was

a disorder of the mind and body, closely related to melancholia* and potentially fatal if not treated. [...] The university physicians were trained to recognize symptoms of love. By interpreting signs in the patient’s body and behavior (for example, by testing his pulse to see if it changed dramatically when the beloved was mentioned) the doctor could diagnose the malady even if the patient were unwilling to reveal its source. He would then prescribe a regimen designed to restore the body’s strength and to distract the mind from its obsession. Baths, good food, wine, and sleep insured the return of physical vigor, while therapeutic intercourse, business affairs, legal difficulties, real or concocted, and various types of sports and games, like riding or chess, distracted the mind from its fantasies. If left untreated, however, the disease of love could degenerate into melancholia, thought to be even more difficult to cure than lovesickness. (Wack 1990: xi-xii)

intercourse with the desired person; if that is not possible, then with another. All the authors recommend it highly; Avicenna and Gerard claim that the disease cannot be cured perfectly without it. If the desired person cannot be obtained legally and according to the faith, then recourse was to be had to "buying girls, and sleeping with them, getting fresh ones, and delighting in them". (Wack 1984: 56-57)

It makes me wonder if some romance heroes also ascribe to this medical theory since there are a fair number who seem to believe that one night of sex with the heroine will help them get over their feelings for her and they're often quite prepared to resort to blackmail in order to get the 'cure' they desire.

Medieval doctors may not have understood the mechanisms by which illnesses were caused, and we may question the efficacy of many of their suggested cures, but they weren't completely wrong in their diagnoses. Modern doctors are concluding that the strange effects caused by love may be due to chemical changes in the brain:

Science is beginning to pay more attention to the chemical storm that romantic love can trigger in our brains. Recent studies of brain scans show that being in love causes changes in the brain that are strikingly similar to serious health problems like drug addiction and obsessive-compulsive disorder. [...]

Studies in Italy looking at blood levels of the brain chemical serotonin have suggested that love and mental illness have much in common. They compared serotonin levels of people recently in love; patients with obsessive compulsive disorder; and a "control" group that was neither. The researchers found that the love-struck participants showed a drop in serotonin levels similar to those with obsessive-compulsive problems. (Parker-Pope 2007, Wall Street Journal)**

For all that medieval doctors' scientific knowledge was lacking by modern standards, their descriptions of lovesickness nonetheless demonstrate an understanding of the symptoms and feelings caused by love and in this respect they may have a lot in common with modern romance authors.

Most romance novels (with the obvious exception of medical romances) don't make accuracy in medical matters a high priority and it's perhaps better to think of many medical details in romances as having a strong metaphorical and psychological significance rather than view less than total accuracy as a flaw. I'm not suggesting that romance authors never bother to get medical details right, because many do make great efforts to ensure accuracy, but it's certainly not always the case. Some romances seem to use medical matters almost metaphorically, with the emphasis on emotion and psychological exploration rather than strict attention to medical detail. This really isn't very different from the ways that 'wallpaper historicals' use historical details and settings to create a romantic backdrop for the drama but are not overly concerned with total historical accuracy, or, to take some more literary examples, the way in which Ionesco uses the metamorphosis of his characters into rhinoceroses to describe the spread of fascism, or the role of cholera in Thomas Mann's Death in Venice, where the disease can be read as an indicator of moral decay.

One of the most common romance medical metaphors concerns the location of the hymen. As Kalen Hughes observes,

Contrary to what appears to be popular mythology (at least among the writers of romance and erotica) the hymen is not a “barrier” (except in RARE cases that require surgery; 1 in 2000 per Blaustein's Pathology of the Female Genital Tract) nor is it up inside the vaginal canal as it is commonly represented to be in fiction.

Here's an example of a description of the piercing of a romance heroine's hymen:

Her hands were scrabbling through his hair [...] blindly seeking some course that would answer the tumultuous need within. And finally he answered it, lifting himself over her, knowing she was open to him, open and waiting tremulously, wanting the ultimate fulfilment of all he could give her, and she sighed with intense relief as she felt him push into her, felt her inner muscles contract around him, felt the glorious fullness moving slowly onward, meeting the resistance of her virginity, pausing.
Even in that brief moment of panic she couldn't bear the thought of him stopping. If there was pain, there was pain. She didn't care. (Darcy 2003: 95)

While this heroine has clearly got a hymen located somewhere anatomically impossible, the barrier here represents the way the heroine is letting down her emotional defences, opening herself to the hero emotionally as well as physically. Where she had previously avoided falling in love, now she is willing to take a risk, even if it causes her pain. Another medical condition common to romance is what Maria K labels 'AIR Syndrome':

The word amnesia may sound scientific and impressive but Amnesia In Romance (AIR) has nothing to do with medicine and everything to do with air-headed research. Many novels romanticize head injury and portray amnesia patients in a completely unrealistic manner.

I recommend you read Maria's article if you want to know more about the reality of brain injury and how it compares with the descriptions in romance. Maria concludes, with her tongue firmly in her cheek, that AIR Syndrome is probably

caused by conversion hysteria, some sort of confusional state or delirium, dissociative disorder or psychosis rather than a head injury, although romance authors seldom choose these alternatives. Someone might forget a traumatic event to protect herself from severe emotional distress or they might have a multiple personality.

I agree, and I think that yet again what the romance authors are trying to do is portray for the reader the emotional intensity involved in falling in love.

Another medical problem I've noticed in romances are heart conditions. A striking example of almost literal broken-heartedness can be found in Anne Mather's Jack Riordan's Baby. After Jack becomes estranged from his wife, Rachel, he tries to take his mind off his problems by devoting himself to his business (one can imagine that the medieval medical practitioners who suggested that the love-sick individual should be distracted by 'business affairs' would have approved), unfortunately the treatment is not successful (though his business flourishes) and he develops physical symptoms of heart disease, collapses and ends up in hospital. It also appears that, as feared by medieval doctors, his illness has almost developed into melancholia (a term which ancient and medieval doctors used to describe a variety of different mental health problems, including what we'd now term 'depression'*):

He certainly didn't believe the shrink who'd come to see him while he was in the hospital. Obviously someone who was recovering from an attack that had limited the amount of blood entering the heart might be suffering depression [...]. His diagnosis - that Jack's problems were possibly as much psychological as physical - hadn't won him any favours. [...] Okay, he [Jack] thought now, so maybe their estrangement had played a contributory role in the way his body was behaving now. Losing three babies [his wife had miscarried three times] and the wife you loved more than life itself could do that to you (2006: 155-156)

Once Jack and Rachel are reconciled Jack's health returns and in fact 'had never been better. He'd had a comprehensive check-up [...] and according to Dr Moore his arrhythmia had corrected itself' (2006: 181). I'm not sure what modern doctors would think about Jack's symptoms and his rapid recovery, but I'm sure that their medieval colleagues would have had little problem diagnosing Jack's problems as being caused by lovesickness, nor would they have been surprised by his swift return to health. There's another Jack with heart trouble in Maggie Cox's The Pregnancy Secret and here the heroine quite explicitly makes a connection between emotional heartbreak and his heart attack:

clearly Jack's lifestyle up until now must have been impossibly stressful to have caused him to need heart surgery at the too young age of thirty-seven [...] She already knew that he was angry and bitter about what had happened between them. If he'd been carrying around that rage inside him all these years and on top of that the stress of a demanding job, then no wonder he had suffered a heart problem!
Caroline had read in a self-help book she'd bought that one of the possible metaphysical causes of a heart attack was when a heart felt deprived of joy due to a person's pursuit of making money over everything else ... that, plus long-standing emotional problems that eventually helped harden the heart. (2006: 164-165)

If, rather than feeling upset at a lack of accuracy in modern romance novels, we treat the descriptions in the novels as metaphors which use medical terminology to describe emotional states, and accept that these texts are more concerned with describing emotion than with medical realism, we will have a more satisfactory reading experience. 'Heart-ache', 'Heart-broken', 'Lovesickness', 'Love is blind' are all expressions which do precisely the same thing: they use the language of medicine to describe the experience of falling and being in love.

The term 'melancholia' suggests modern syndromes of depression, and it certainly did designate cases of psychotic depression and probably other severe depressions, but it also referred to a variety of what would come to be called functional psychoses, including schizophrenia and manic-depressive psychoses; and probably some disorders now recognized as organic psychoses were included. (1972: 289)

Medieval doctors also ascribed to the theory of the humours, and melancholia and lovesickness might sometimes be ascribed to an excess of black bile.

**There's more on this topic here (from The New York Times) and here (from the BBC).


Image from the Medieval Woodcuts Clipart Collection. This particular image isn't actually of a doctor diagnosing love sickness. It shows a woman visiting a doctor (he's the one examining a urine flask) and is taken from the Mer des Hystoires, Paris 1488-89. In general medieval medicine considered lovesickness to be an illness which afflicted aristocratic males:'the sufferer was typically thought to be a noble man' (Wack 1990: xi).
Posted by Laura Vivanco at Monday, March 26, 2007