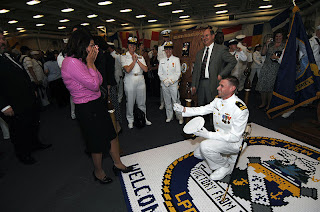 She was beginning to feel horribly embarrassed. People were beginning to look. A number of the girls were beginning to nudge one another and titter. [...] Frances looked at him in mute appeal.
And then her daring, impulsive, annoying, wonderful Lucius did surely the most reckless thing he had ever done in his life. He risked everything.
"Frances," he said without even trying to lower his voice or make the moment in any way private, "my dearest love, will you do me the great honor of marrying me?"
There were gasps and squeals and shushing noises and sighs. [...]
It was the sort of marriage proposal, a distant part of Frances's brain thought, that no woman would ever dream of receiving. It was the sort of marriage proposal every woman deserved.
She bit her lip.
And then smiled radiantly.
"Oh, yes, Lucius," she said. "Yes, of course I will."
[...] everyone within hearing distance clapped. (Balogh 336-37)

That's an excerpt from Mary Balogh's Simply Unforgettable. It raised a few questions for me. In making a public proposal how has a man "risked everything"? And supposing you were a single women receiving this proposal, and you were in love with the person making it, would you

(a) feel this was "the sort of marriage proposal every woman deserved"?
(b) "feel horribly embarrassed"?
(c) feel some other emotion/have an alternative opinion?

Why?
----
The very public proposal in the photo took place on "(March 10, 2007) - Lt. Ryan Hinz proposes to Nora Awad aboard the newly commissioned ship USS New Orleans (LPD 18). Awad said yes and both were congratulated by the Secretary of the Navy (SECNAV), the Honorable Dr. Donald C. Winter." The photo came from Wikimedia Commons.
Posted by Laura Vivanco at Saturday, September 26, 2009