A Tale of Two (or more) Tanyas

Laura Vivanco
The front cover and five pages of today's G2 section of the Guardian have been given over to Tanya Gold's "Confessions of a secret Mills & Boon junkie" and "The Magnate's Mistress – Tanya Gold's debut Mills & Boon novel: An exclusive extract."

The latter, which "swim[s] into pastiche," reminds me of Tumperkin et al's The Unfeasibly Tall Greek Billionaire’s Blackmailed Martyr-Complex Secretary Mistress Bride [Chapters 1, 2, 3, 4, 5 and 6] and All About Romance's Purple Prose Parody contests, which were designed to "celebrate the excesses of our beloved genre. But whereas Tumperkin, her collaborators, and the PPP contestants revel in their parodies, Tanya Gold's seems a bit strained, perhaps reflecting her conflicted feelings about the genre. In an earlier essay, about the Glastonbury festival, Gold wrote that 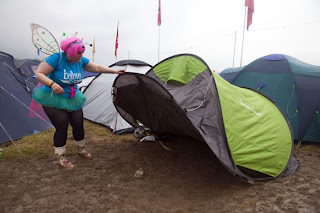 my name is Happy Fairy Tanya. I used to be Bitter Journalist Tanya, but then I went to Glastonbury. If you do not address me by my new title, I will rip your eyeballs out with my shimmering fairy wings.

In The Magnate's Mistress Gold writes like someone who wants to believe in fairies, who perhaps even wants to be a fairy, but who can't suspend disbelief long enough to bring Tinkerbell back to life.

The pages in the Guardian reveal as much, if not more, about Tanya Gold than they do about M&Bs, and they do so in a way which reminded me of an article written by Tania Modleski.

It would be naive to assume that either of the Tany/ia's is exactly as she portrays herself in her articles. Both are skilled writers, who shape their material into a particular form, in Tania's case with a didactic, and in Tanya's a humorous, intent. Nonetheless, both seem to make themselves vulnerable to the reader by exposing both their desires and their ambivalence about them.

when I am loveless or annoyed, I think – yes, I can have a Mills & Boon. I can have virtual sex with a non-existent man who is made of paper. So I retreat to my bed with The Venetian's Moonlight Mistress and live in a perfectly etched fantasy world where I get everything I want.

I can't even begin to write a woman I like enough to give a lover to. Begin with myself, you say? How? There is nothing heroic about me. I am bilious and I smoke. I suddenly become convinced that I am too cynical to write this proposal properly and, in the pantheon of Mills & Boon readers, I am not quite sure where this leaves me. Ready to become a 60-book-a-month girl? Or does this self-loathing in itself make me a Mills & Boon heroine? A woman who does not believe herself loveable enough to write a hero for? Nah. Pass the axe.

Tanya attempts to write in the Mills & Boon style but her heroine "is partly the opposite of me and partly the woman I wish I were. Either way, I hate her."

Tania Modleski has a similarly love-hate relationship with the genre and her own desires. She too has found herself "trying to understand my [...] addition to romances" (15), to understand (in Gold's words) "Why do I feel shame?" about reading romances. In "My Life as a Romance Reader" Modleski focuses on the personal nature of her relationship to romances, a genre which has "been central to my fantasy life since I was a preteen" (15). Her intellect and her desires are in conflict:

all those years of higher education and all those years of dedicated feminism hadn't lessened the attraction of the romances for me. I became consumed with the desire to figure out why I, a fervent feminist, had not shed these fantasies with all the rest of the false consciousness I had let go. (21)

Gold is informed that the genre has changed, become more feminist:

Clare Somerville, the marketing director [...] says "[...] I get very cross when people say we denigrate women. I think we are one of the most feminist publishers in existence."

Somerville smashes my preconceptions. Preconception One – in a Mills & Boon novel you get an overpowering hero riding up on a white horse and saving the heroine. This, Somerville explains, is not true. They used to publish books like that, but no more. They've moved on. "The Mills & Boon heroine," she says, "has changed from a cipher that is in every way inferior to the man to being the dominant force in the relationship." Nowadays, she explains, the woman is in control. The heroines used to have terrible jobs but today you find them running companies. The woman doesn't leave her job to marry the man. She keeps her job and marries.

Modleski, coming back to the genre after some time away from it, had her preconceptions about the modern genre challenged in a similarly brisk fashion:

"Rape is out," a romance writer told me [...]. She said it as if she were announcing a style trend. Apparently in some of the "bodice rippers," as the longer racier historical romances were called then, the heroine was sometimes subjected to rape. (21)

It seems undeniable, however, and both Tany/ia's are aware of this, that "Some things in Mills & Boon land are eternal" (Gold), and despite changes in the genre, it is still possible to find heroes who

are appalling. They are always saying things like, "You are a stupid little fool!" And I end up thinking women who read these books – including me – are incredibly stupid. (Gold)1

Certainly, readers like the Tany/ia's seem to be incredibly conflicted. In Modleski's case, "Eventually it dawned on me that the elements of the formula that most disturbed me were the very same ones I desired for my reading pleasure" (24). Tanya Gold (at least in the persona she reveals in her article) sometimes seems to want to know the formula to turn herself into a fairy, but most of the time she doesn't really believe they exist.

1 Smart Bitch Sarah seems to have found a recent novel in this mould in Sharon Kendrick's The Playboy Sheikh's Virgin Stable Girl.