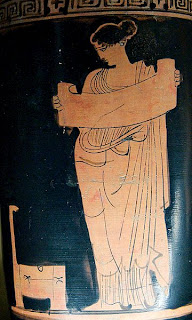 Since we've been having discussions about the experience of reading, I thought it might be interesting to post a couple of quotes concerning some of the ideas about reading that existed in the ancient world. In Plato's Phaedrus,

Lysias is Phaedrus’ lover. In their homoerotic relationship, Lysias is the active partner (the lover), Phaedrus the passive partner (the beloved). But here the lover is also the writer: Lysias wrote the discourse. Phaedrus will read this discourse out loud: the beloved here is thus also the reader. Now, within the Greek context, such a doubling of roles (the lover who doubles as a writer, the beloved who doubles as a reader) cannot be innocent: one of the first Greek models of written communication, in fact, defines the writer as a metaphorical lover, leaving the role of the beloved to the reader. This “pederastic” metaphor stems in part from the fact that the Greeks of the first literate centuries read exclusively out loud: through his writing, the writer is supposed to use the reader, the indispensable instrument for the full realization of his written word. The writer uses the reader, just as the lover uses the beloved to satisfy his desire. (Scheid and Svenbro 124-25)

What then happened when in certain circles the practice of reading silently began to take hold at the end of the sixth century B. C.? […] in the silent reading of the Greeks, the voice of the reader is in some sense transferred into the graphic sphere, which in turn raises its voice: the Greek who reads silently hears the “voice” of the writing in front of him in his head, as if the letters had a voice, as if the book were a talking object. In Euripides’ Hippolytus, the writing is supposed to be capable of “speaking” to the reader who reads in silence, of “shouting” to him, even of “singing” him a melos. It is as if the voice were inside the writing, present inside.

In other words, from now on writing and the voice seem to be lodged in the same place, and the “text” - created by the reader each time his voice unites with the writing – therefore becomes quasi-obsolete, replaced by a text that is closer to our own, which tends to erase the interpretative, or at least vocal, contribution of the reader (to such an extent that a considerable theoretical effort became necessary in the twentieth century to accord the reader an active role in reading). An unsuspecting ventriloquist, the reader now listens, in his head, to a text that seems to be addressing him autonomously. (Scheid and Svenbro 127)

As for the history of reading romances, McDaniel College have a new article up on their website about Pamela Regis:

In the early years of Regis’ scholarly attention to romance fiction as a form worth studying, she was criticized and all but ostracized from the academic community when she presented a paper noting Jane Austen as a romance writer. [...] Although nearly 20 years have passed, Regis will always remember it as her Davy Crockett moment since the paper was delivered in San Antonio, home of The Alamo, where the famed frontiersman and statesman perished.

“Oh, it was ugly. I was under siege,” said Regis last week. “They attacked. They handed me my head.”

In those days, Regis stood essentially alone among academics in believing that romance fiction is indeed worthy of study and recognition as a legitimate, centuries-old form. The harsh criticism rattled the young professor, but she remained undaunted.

[...] the romance criticism that was around when I began my thinking about the form in the early ’80s was so negative, so condemnatory of the form, that I thought, ‘Really!? Can all these women really be choosing to read such toxic literature, and is it really harming them in the ways that these critics claim?’” Regis says.

Edited to add: I've only just seen another post that's relevant to this discussion, so I'm adding some quotes from it. Over at Romance: B(u)y the Book, Gwendolyn Pough is discussing her experiences as a reader, and this too has a historical aspect to it since

Fifteen years ago, Kensington published the first Arabesque novels. To be sure, there had been a few romance novels published prior to 1994 that featured black heroes and heroines. Before that time, we had Rosalind Welles’s "Entwined Destinies" (1980), Jackie Weger’s "A Strong and Tender Thread" (1983), Sandra Kitt’s "Adam and Eva" (1985) and Joyce McGill’s "Unforgivable" (1992). Traditional paperback romance novels that showcased black love had been sparse to say the least. However, from the time editor Monica Harris got Kensington to publish those first Arabesque novels all of that changed.

[...] Many black women romance readers, like myself, read romance novels long before the first African American imprints appeared in the early 90s. Many still read a wide variety of romance and don’t limit their reading based on the race of the author or the race of the characters in the book. Some only started reading romance novels when the black romances were published and never will read a romance with white leads. Some have read white authors in the past when they couldn’t find black authors and will never read another white romance again now that they can find black romances. However, most black readers will tell you that they read black romances because they want to be able to relate to the book. They want heroines that look like them.

That's just an (admittedly fairly substantial) excerpt of the blog post [the embedded links were added by me], so if you want to read the rest, you'll need to head over to Romance: B(u)y the Book.
------

Unfortunately I couldn't find a photo of a depiction of Phaedrus reading. Instead I've included a photo of a vase painting of a Muse "reading a volumen (scroll), at the left a klismos. Attic red-figure lekythos, ca. 435-425 BC. From Boeotia." This and other details about the work can be found at the same Wikimedia Commons page where I found the photo.
Posted by Laura Vivanco at Friday, September 25, 2009