The M&B heroine fights back 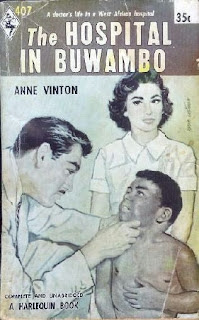 In what might be considered a follow-up to Julie Bindel's recent comments on Mills & Boon romances, on Saturday the Guardian published an article by Tanya Gold. She's digging even deeper into the Mills & Boon archives than Bindel did, and is also making generalisations:

these are not disempowerment fantasies, they are in fact the opposite. [...] They were among the first popular novels to depict women who work - all Mills & Boon women work (unless they are kidnapped). Critics complain the books are materialistic and venerate the aristocracy. In fact the Mills & Boon heroine is ordinary, often orphaned (parents tend to die in boating accidents) and plain.

Since this is not an accurate description of all Mills & Boon heroines, I begin to suspect that this is the same Tanya Gold who's fascinated by Jane Eyre: 1

This novel is simply the best novel ever written [...]. It's romantic fiction redux and it's there to heal your pain. [...]

Mr Rochester [...], whom Jane first meets when he falls off his horse, "has a dark face with stern features and a heavy brow; his eyes and gathered eyebrows looked ireful and thwarted".

Do you get the idea? Do you recognise this tender brute from Barbara Cartland, Mills and Boon, Neighbours? [...]

In Rochester, Charlotte wrote a hero no real man can ever touch. Jane Eyre should be subtitled Revenge Of The Parson's Daughter because she spoilt real love for us all.

He is the man in every film, book or TV series you ever wanted; the dark darling you can save from himself. Plus Thornfield would be fab to redecorate.

And Jane is so ordinary, "poor, obscure, plain and little", that anyone could get him. He chucks the glamourous beauty Blanche for Jane. He falls, like a god, into our laps.

But to get back to the vintage Mills & Boons, Gold states that

far from being misogynistic, men who are cruel to women are punished horrifically by the Mills & Boon gods. If your lover takes advantage he will be blinded. If he lies to you he will develop amnesia and think he is a child. If he cheats on you he will have his arms blown off by a landmine. Is that really a disempowerment fantasy? Or is that what I really, really want?

And Mills & Boon was multicultural long before it became fashionable. "I am a foreigner, and you English distrust foreigners," said the hero in They Meant to Marry (1934). "Oh, not since the war," replies his heroine. By the 1950s Mills & Boon woman had junked the Englishman altogether - and found time to smash the glass ceiling. In The Hospital in Buwambo (1957), Dr Sylvia Phillips is told "Africa is no place for a woman". She spits back: "We do everything nowadays" - leaving the hero to have his arms blown off (yes, another one).

Again, I suspect the influence of Mr Rochester, who loses his sight in a fire. Gold is quite clearly writing with her tongue stuck firmly in her cheek, no doubt to protect it from the explosions, as she concludes that "Mills & Boon women respect themselves and expect the men who love them to respect them too - if they don't, they'll get their arms blown off," but this is clearly a spirited defence of the novels from someone who enjoys reading romantic fiction. Read separately, Bindel and Gold's articles would be highly misleading; read together, they possibly balance each other out.


The picture of the cover of The Hospital in Buwambo is of the Harlequin edition, and is from the Fantastic Fiction database.
Posted by Laura Vivanco at Monday, December 10, 2007