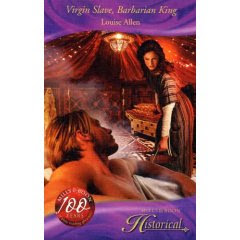 This is yet another update in the ongoing debate sparked by Julie Bindel's article about Mills & Boon in the Guardian. Louise Allen, whose novel Virgin Slave, Barbarian King was cited by Bindel because of the language used in its back cover copy, has now had her response printed in the Guardian under the title "My heroines are independent. This is not patriarchal propaganda."

But to return to the cover for a moment, though this time the contents of the front cover rather than the back, I have a suspicion that the cover art was inspired, at least in part, by the scene of Mr Darcy's bath, in the 1995 BBC adaptation of Pride and Prejudice.
Posted by Laura Vivanco at Wednesday, December 12, 2007