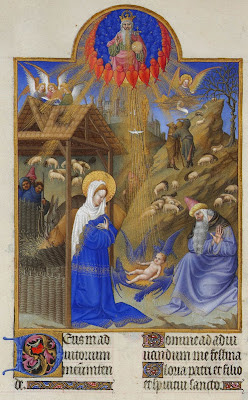 Harlequin Presents editor, Tessa Shapcott, has written a Harlequin version of the Twelve Days of Christmas, the last verse of which is:

And, as reported at Dear Author, Harlequin is also giving away some free ebooks between Christmas and New Year. Details are here.

The illustration of the Virgin and the Boss's Secret Baby (secret from King Herod, at any rate) is from Les Très Riches Heures du duc de Berry, via Wikipedia.

The Christmas Price Index is an economic indicator, maintained by the U.S. bank PNC Financial Services, which tracks the cost of the items in the carol "The Twelve Days of Christmas". If your true love happens to be a desert king, a Greek tycoon, a billionaire or a prince, he could easily afford such an outlay.
Posted by Laura Vivanco at Wednesday, December 26, 2007