Fantasies and Romance as Fairy Tale 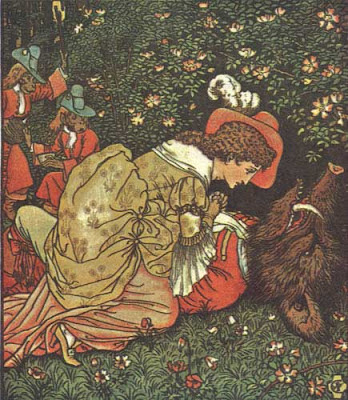 I've recently come across a paper written by Jennifer Lohmann for her degree of Master of Science in Library Science. It's titled "'Beauty and the Beast' Themes in Romance Novels" and I'm going to quote some of the points she makes, because I think they're relevant to the ongoing discussion we've been having about rape, power dynamics and reading romance as fantasy. The full paper is available here and Lohmann illustrates her argument with particular reference to Laura Kinsale's Flowers from the Storm (23-27), Judith Ivory's Beast (28-32) and Nicole Byrd's Beauty in Black (32-35).

Radway and Modleski have already argued romance novels help women manage the problems of modern American culture. I extend their arguments to include the problems Bettelheim believes “Beauty and the Beast” helps children cope with. (35)

Bettelheim argues “Beauty and the Beast” helps children work through specific developmental problems they encounter as they age. These problems are: understanding the uglier side of self, overcoming anxieties about sex, and surmounting the desire to remain a passive actor in life. Specifically, I argue that in a culture where “female characters […] and their sexuality has remained quite rigidly imagined as either virginal or whorish,” the “Beauty and the Beast” theme helps readers in a similar way fairy tales help children (1-2)

Modleski argues Harlequin romances reveal deep confusion and fear in women regarding sex and violence. The pseudo-rape scenes of the novels and “the desire to be taken by force (manifest content) conceals anxiety about rape and longing for power and revenge (latent content)” (48). In the novels, Modleski finds a great deal of anger over the power men have over women and domination, which often gets confused with desire. (17)

The reason for an animal-groom and not an animal-bride is “it is the female who has to overcome her view of sex as loathsome and animal-like” (Bettelheim 285). Linking back to the divided self, Beauty must overcome her loathing of the Beast (as he represents her animal self and her sexual nature) before she can come into her full personhood. [...] Of concern to this paper is the virgin-whore dichotomy, “the axis of sexually ‘pure’ or sexual ‘ruined,’ of virgin or whore, of loose woman or bad girl” (Gameson 158). Women can be either virginal (childlike, not aware of their animal self) or whores (their animal self has taken over). (19) 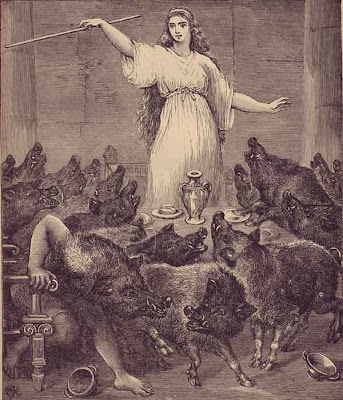 Another issue which is briefly touched on by Lohmann is the role of another woman in turning the hero into a Beast:

Only Lion has a sorceress to blame for the hero’s curse and, unlike the fairy tale, the sorceress is punished for her misdeed. However, many of authors create the beast around a woman. In Ravished, Sale, and Only, society suspects the hero of killing a woman. In Ravished and Only, this woman was unfaithful and killed by someone for her misdeeds (in Ravished it was her father, in Only her lover). Kinsale suggests a woman is responsible for the hero’s madness by making the malady (it seems as if the hero of Flowers has a stroke) take place as the hero is leaving his lover’s bed and runs into her husband. The hero in Taming retreats from society because the scars he got after an accident repulsed his ex-wife. This creates a situation like the fairy tale, where a woman creates the beast in the hero. (11)

In the Christian tradition, the Virgin Mary is often seen as the woman who reverses the actions of the (sexual) Eve, and we've discussed the heroine's role in redeeming the hero in previous posts. As I mentioned in a comment to an earlier post, there is a long tradition of male fears about suffering harm as a result of vaginal intercourse and as Talpianna added, this "links ups, in a curious way, with the charges against witches in the Malleus Maleficarum: they mostly involve spells interfering with fertility/virility." Germaine Greer once wrote that

Women have very little idea of how much men hate them. Any boy who has grown up in an English industrial town can describe how the boys used to go to the local dance halls and stand around all night until the pressure of the simplest kind of sexual urge prompted them to score a chick. The easier this was the more they loathed the girls and identified them with the guilt that their squalid sexual release left them (249).

Perhaps in some romances in which the hero distrusts women and/or treats the heroine badly, or poses a threat to her, we can see this as a fantasy, in which the heroine must deal with male fears of female sexuality (which have led men to fear, despise and/or (ab)use women) and find a way to be both good (the redeeming female) and sexually active (but without becoming the feared woman).


The images are both of pig-men. The first is an illustration from Wikipedia by Walter Crane, for Beauty and the Beast. London: George Routledge and Sons, 1874. In the second illustration the enchantress Circe has turned Odysseus's men into swine.
Posted by Laura Vivanco at Saturday, December 15, 2007