Weighing up Chick Lit vs. Romance 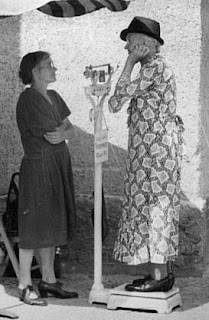 However, since some of you do, and since it makes a change from the more common concerns about romance having a negative effect on women's relationships, I thought I'd post about it. The authors describe chick lit as "a new genre of romance novels" which "differs from traditional romance novels in its focus on women’s struggles with their weight, dating, and stressful careers." They later add that "Compared with chick lit, traditional romance novels might be less obsessed with women’s body size."


Effects of visual representations of the thin ideal in the media have been widely explored, but textual representations of the thin ideal in novels have received scant attention. The chick literature genre has been criticized for depicting characters who worry about their body weight and who have poor body esteem. Excerpts from two chick lit novels were used to examine the effect of a protagonist’s body weight and body esteem on college women’s (N = 159) perceptions of their sexual attractiveness and weight concern. Two narratives were used to minimize the possibility that idiosyncratic characteristics of one excerpt might influence the study’s results. Underweight (vs. healthy weight) protagonists predicted readers’ lower perceived sexual attractiveness. Protagonists with low body esteem (vs. control) predicted readers’ increased weight concern. Scholars and health officials should be concerned about the effect chick lit novels might have on women’s body image.

The image is one I've cropped slightly, having found the original at Wikimedia Commons. It shows a scene in Berlin in 1947 and came from the German Federal Archive as part of a cooperation project.
Posted by Laura Vivanco at Tuesday, December 11, 2012