Over at my personal blog I've been running a series about the study of popular culture. In the first post I suggested that while


We may have detailed maps of the "known knowns," [...] beyond them lie the "known unknowns," those areas of popular culture about which we know we know little. And then, beyond them, are the "unknown unknowns." Before we accept reports that "something hasn't happened" before, we might want to try to do more research, to verify whether one of those "unknown unknowns" is the knowledge that it has, in fact, happened before.

In the second, I responded to Erin S. Young's "Flexible Heroines, Flexible Narratives: The Werewolf Romances of Kelley Armstrong and Carrie Vaughn" (2011). My feeling was that some of the history of romantic fiction was an "unknown unknown" to Young.

Today Dr Hannah Priest is posting about the traditions concerning female werewolves. The details are interesting in themselves, but Hannah also draws


attention to a common issue with studies of contemporary paranormal fictions: which precedents should be cited. In the case of werewolves (and, perhaps even more, vampires), the temptation is to hold up twentieth-century cinematic monsters as the tradition and to read twenty-first-century romance iterations as a subversion. Sadly, more often than not, it is also twentieth-century cinematic male monsters that are held up as the norm, denying a long and complex history of presenting female monsters. If we follow this approach, we will undoubtedly read paranormal romance’s creatures of the night as subversive and paradigm-altering. However, this is a misleading simplification that ignores millennia of literature and story-telling.

I'd encourage you to read Hannah's summary of "millennia of literature and story-telling" about female werewolves. 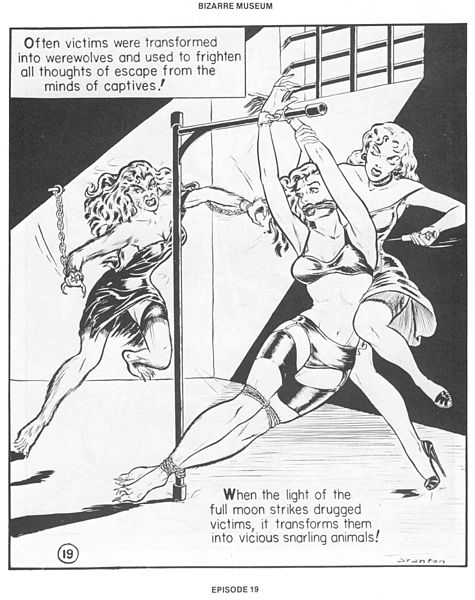 The image dates from 1951 or 1952 and was "Originally published by Irving Klaw, republished in Bizarre Comix Volume 9." I found it at Wikimedia Commons where it is deemed to be "in the public domain because it was published in the United States between 1923 and 1963 and although there may or may not have been a copyright notice, the copyright was not renewed."
Posted by Laura Vivanco at Tuesday, December 18, 2012