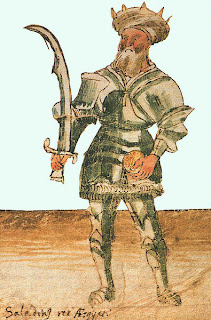 Amira Jarmakani's "Desiring the Big Bad Blade: Racing the Sheikh in Desert Romances." American Quarterly 63.4 (2011): 895-928 was published in December and it mentions one of Amy's posts on sheikh romances (published here, at Teach Me Tonight, in August 2011). Here's the abstract for Jarmakani's article:


Through a consideration of desert romances (mass-market romances whose hero is a sultan, sheikh, or desert prince), this essay argues that the racialization of Arabs and Muslims in contemporary popular culture operates by conflating ethnicity, religion, geography, and the notion of civilization. As the racialization of actual Arabs and Muslims in the global North has become more overt, the representational racialization of sheikhs in desert romances has become more covert. Ironically, precisely because romance novels must protect the fantasy narrative by submerging any overt references to race, they are useful for exploring the shifting meanings of race vis-à-vis Arabs and Muslims.

And here's a quote:


the conflation of dark and dangerous, signifying a conflation of race and violence, in the sheikh’s eroticized sexuality functions according to longstanding U.S. racial logics that simultaneously uphold and disavow the links between race and sexuality.

To some extent, these links can be seen in the romance genre as a whole. This is not to say that there is a plethora of nonwhite heroes in mass-market romances; in fact, a common complaint among romance readers is the lack of “minorities” in romance and, in particular, of multiracial romances. However,  [...] authors sometimes use exotic tropes to give the hero his hard edges. In constructing the figure of the Latin lover, for instance, authors can mobilize mainstream assumptions about machismo to signify alpha maleness. In Native American heroes, romance authors can mobilize the fierce warrior stereotype to make him alpha and draw on typical “noble savage” associations to craft his sensitive side for the heroine.

Desert romances fall roughly into this group of exoticized romance heroes, a group that notably excludes the black hero. [...] The persistence of what seems to be a separate but equal clause in mass-market romances speaks powerfully to both the unspoken presence of racial ideologies in the romance genre and the lingering potency of stereotypes about violent black masculinity. The balance between fantasy and reality that romance authors must strike manifests tellingly when it comes to race; nonwhite characters are either segregated or contained through various devices, while race appears in phantasmic ways. More often than not, authors use the “chromatic associations” of darkness and blackness in describing racially white heroes, thereby incorporating metaphors that are deeply embedded in racial logics of the global North. (896)


The image of " 'Saladin rex Aegypti' from a 15th century manuscript" came from Wikimedia Commons.
Posted by Laura Vivanco at Thursday, June 14, 2012