"The Marx and Engels" of Romance Scholarship 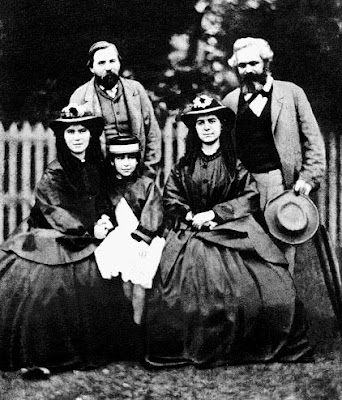 On the eve of the RWA conference Joanne Rendell, writing at The Huffington Post, takes a look at "a growing shift in the way the ivory tower sees romance" and the "fascinating relationship which is evolving between professors studying romance novels and the romance world itself."

In the course of this article she describes Eric Selinger and Sarah Frantz as "the Marx and Engels" of romance scholarship. It did strike me that that particular description might be more fittingly applied to any two of
Rendell, though, doesn't seem to have meant the "Marx and Engels" description of Selinger and Frantz to suggest anything about the politics or subject-matter of their work. Rather, she's looking at important personalities in this rapidly growing area of scholarship.

Inevitably there are omissions, and a reader may receive the impression that positive scholarship on the genre emerged rather more recently than it actually did. Without wishing to in any way minimise the huge contributions of Sarah, Eric, Pamela Regis and others mentioned in Rendell's article, or the importance of the RWA's academic grant program, also mentioned there, it should be noted that just as socialism's history began long before the emergence of Marx and Engels so, as Eric observed in a comment attached to a recent post I wrote about the history of romance scholarship, "This is a field that has been going on, in one form or another, for at least forty years; the more we keep that history in mind, the better off our new work will be."

Despite all those caveats, I think we can agree that the Marx and Engels of romance have started an online revolution in romance scholarship, initially via the listserv but more recently via the IASPR website (if you haven't seen them already, please do go and take a look at the new forums) and the forthcoming online Journal of Popular Romance (which is now accepting submissions).

The photo of "Friedrich Engels, Karl Marx and his wife Jenny, and their children Laura and Eleanor" came from Wikimedia Commons.
Posted by Laura Vivanco at Tuesday, July 14, 2009