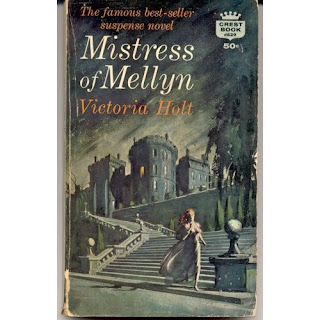 The appearance of Studies in Gothic Fiction, a new "online refereed academic journal devoted to the study of the Gothic from its beginnings in the eighteenth century to the present," to be launched in November 2009 (and currently "seeking articles and reviews for its premiere on-line issue") has reminded me that I haven't posted much at TMT about twentieth-century gothic romances. As I'm not particularly well-read in the sub-genre, however, I won't attempt to present any analysis of my own. What follows is really a very brief literature review of some of the secondary material about the sub-genre.

The twentieth-century gothic romance has its

roots [...] in the tales of terror and seduction which were the most popular type of fiction in the eighteenth and early nineteenth centuries; it has, however, largely departed from the authentic gothic mould as the status of the heroine has altered and thus affected her responses to the archetypal male character [...]. The more extravagant excesses, both physical and psychological, have been toned down; incarceration in crumbling castles, haunted abbeys, labyrinthine forests or catacombs has been replaced by sojourns in roomy but not necessarily huge houses, and insane, power-crazed baddies have been replaced by calculating seducers and con-men. However, the central element - woman in jeopardy - has remained comparatively unchanged from the mid-eighteenth-century beginnings of the gothic story to the romantic suspense novels of the 1990s. (Cadogan 7)

Carol Thurston described the modern gothic romance like this:

Also called romantic suspense, the modern gothic romance reached its peak of popularity in the United States during the 1960s, after paperback reprints of stories by Mary Stewart, Victoria Holt, Nora Lofts, and Dorothy Eden became widely available. This twentieth-century version of the gothic gives as much attention to the developing love relationship as to the mystery; more often than not the two are the same, a plot device exemplified in the title of Joanna Russ's 1973 article, "Somebody's Trying to Kill Me and I Think It's My Husband: The Modern Gothic." The frequently cited prototype of the modern gothic romance is Daphne du Maurier's Rebecca, published in 1938 and essentially a retelling of Jane Eyre; Victoria Holt's Mistress of Mellyn (1960) is an unabashed retelling of Rebecca. (41)

I can't agree that Rebecca is "essentially a retelling of Jane Eyre" since the personalities and plot seem very different to me. However, they are both written in the first person (the narrator is also the heroine of the novel) and in both the hero has had a first wife, details of whose life remain mysterious to the narrator, who will become his second wife, for much of the time-period covered by the novel. Kay Mussell also draws parallels between these three novels:

The novel that sparked the gothic revival of the 1960s, Mistress of Mellyn by Victoria Holt, resembles both these earlier romances. Mistress of Mellyn, like Jane Eyre, uses the "governess" plot. [...] Although the heroine, like the nameless narrator of Rebecca, may not know why her husband proposed to her, she genuinely loves him. (Fantasy 45)

Mussell, in an article published in 1975, had earlier taken a look at the contrast between the figure of the heroine and the threatening "other woman":

According to the traditional "double standard," sexual relationships are permitted for men (accepted somewhat indulgently as "sowing wild oats"), but not for women, upon whom falls the responsibility for controlling the relationship by denying sex to the male until it has been sanctioned by marriage. Such a situation [...] gives rise to two related aspects of the modern gothic novel: the portrayal of female characters who fail to control their sexuality, and the assurance for the reader that such lack of control leads to defeat. [...] In the case of the gothic novel, social beliefs about female sexuality and its inherent dangers are suggested in the contrast between the heroine and the passionate woman. [...] In the gothic novels of four of the most consistently popular authors of the past two decades (Mary Stewart, Victoria Holt, Dorothy Eden, and Phyllis Whitney), such contrasting figures appear in more than half of the books. (84-85)

While Mussell's article looked at the female protagonists and what one might learn from them about social attitudes towards women, Joanna Russ looked at the male characters in gothic romances and found that the novels' "emotional center is that 'handsome, magnetic suitor or husband who may or may not be a lunatic or murderer'" (679-80). In addition, she thought it possible that the novels themselves might "be a way that conventionally feminine readers can see their own situation" (686) and draw the following conclusions:

If my man treats me badly, that's because he's masculine, not because he's bad. There are bad men and good men; the problem is simply telling which is which. There are bad women and good women; I'm not a bad (read: sexual, aggressive) woman.
[...] Conventionally masculine men are good men (even if they treat me badly) and conventionally feminine women are good women. This makes behavior very easy to judge. It also validates conventional sex roles.
[...] Something is trying to hurt me and tear me down - but I don't know what it is. I suspect it's my man, or men in general, but that's an unthinkable thought. (688)

Radway's essay draws slightly more positive conclusions about the sub-genre because of the "unthinkable thought" it provokes:

Careful examination of the works of such authors as Victoria Holt (Eleanor Hibbert), Mary Stewart, Dorothy Eden, and Phyllis Whitney demonstrates convincingly that while the popular gothic is essentially conservative in its recommendation of conventional gender behavior, its conservatism is triumphant because the narrative permits the reader first to give form to unrealized disaffection before it reassures her that such discontent is unwarranted. (141-42)

As for the covers,

Nearly every modern gothic issued before 1974 sported a predominantly green and blue drawing exhibiting a terrified woman, clad in a long, swirling robe, who was fleeing from a darkened mansion lit only by a glow in an upper window. (Radway 144)

You can see images of a number of gothic romance covers at Morticia's Morgue.


I found the image of the cover of the 1963 Crest edition of Mistress of Mellyn at Amazon.com.
Posted by Laura Vivanco at Sunday, July 19, 2009