Here be Dragons! And Fairytales and Romance Writers 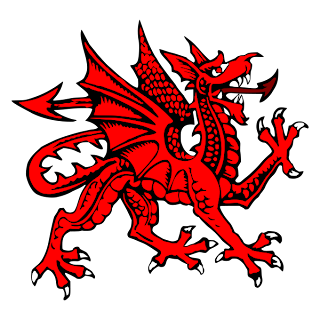 Sandra's still fighting with dragons, almost literally so, since they're the topic of her dissertation, so to encourage her I thought I'd link to an online short story about a dragon. It's not a romantic story, but in "The Last Dragon" by Janet Gover the heroine is also struggling with a manuscript, albeit as an illustrator rather than as an academic, so it seemed appropriate:

There was a manuscript in that folder lying on a chair. An epic tale of heroism.... of knights and dragons and beautiful princesses. It was a story to delight any small child. Clare had one more week to illustrate the tale, or the author and publisher would turn elsewhere. She wouldn’t blame them. The few sketches she’d tried in the past few weeks had been lifeless and dull. Like the endless days she was now living.

She desperately hoped things would be different in this place. Wales was full of dragons. She would find inspiration. Her muse would return. Starting tomorrow!

Since that one's not a romance, I thought I'd better include some that are. Here's another short story by Janet Gover, this time based on a fairytale and titled "Fairy Godmothers Need Not Apply." Fairytales seem to have inspired quite a few romance authors (you can browse SurLaLune's list of just a small selection of some fairytale inspired romances, if you're interested).

To finish off, I'll link to one last short story by Janet Gover. This one is a metaromance, and I haven't mentioned one of those at TMT for quite a while. It's called "The Romance Writer." The metaromance includes excerpts from a novel being written by the eponymous romance writer, and the romance reader in the story describes what she reads as "very good; easily as good as anything on her bookshelves." It's always struck me as a bit risky for a writer to include texts supposedly written by her/his characters and which are accepted, within the work of fiction, as being of high quality. What happens if the real reader assesses them differently? Does that change the whole impact of the piece? And how does it affect the real reader's impression of the real author's own writing?


The Welsh dragon is from Wikipedia.
Posted by Laura Vivanco at Tuesday, July 07, 2009