Laura Vivanco
I was really pleased to get a notification via ProQuest of a couple of new PhD theses about the romance genre. Congratulations Dr Kamble and Dr White! 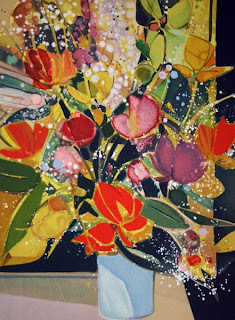 The first is Ann Yvonne White's, from The University of Iowa: Genesis Press: Cultural Representation and the Production of African American Romance Novels. (2008, AAT 3340278). Here are some more details:

I also attended a conference of African American readers, writers, and industry personnel to look at how readers influence the stories, themes, and characters found in the novels. More than 350 people attended the conference including representatives from African American book clubs all over the country. Readers were specific about the kinds of stories they wanted to read, and how they thought the characters should be portrayed in the novels.

Because the books produced by Genesis Press are romances, the editors and publishers adhere to a standard romance formula. But as producers of cultural products that strive to enhance negative images of African Americans, they also rely on the culture, environment, and life experiences of the writers and readers. And as executives who are culturally sensitive, they seek to bring a shared history of cultural awareness and activism to the industry.

The second is by Jayashree Kamble, from the University of Minnesota: Uncovering and Recovering the Popular Romance Novel. (2008, AAT 3338954). Here are some more details:

Popular romance novels are a twentieth- and twenty-first century literary form defined by a material association with pulp publishing, a conceptual one with courtship narrative, and a brand association with particular author-publisher combinations. The theme of romantic love in romance novels forms the basis of a drama involving the extra-private worlds of the protagonists (financial, civic, and familial). The framework of the romantic relationship allows the genre to study the challenges these spheres face over the twentieth and twenty-first centuries. A comprehensive look at the genre's history and diversity, as well as its reception in different readership communities, undergirds this analysis of three tropes involving the romance hero--capitalist, soldier, and heterosexual. The analysis proves the genre's struggle with an economic, political, and social ideology that has gathered force over the last hundred years. Though popular as well as academic critiques of the genre disparage its formulaic sexual content or its attachment to the ideology of middle class morality, its very nature as "commodity literature" helps challenge conservative thought on capitalism, national defense strategies, and sexual orientation.

The dissertation also considers the impact of the dust jackets and paperback covers of romance novels on non-romance readers. A survey of this material history suggests that it has contributed to derogatory opinions on the genre; in particular, the genre has been indicted because of the "bodice-ripper" covers that adorn many romance novels rather than the actual content. A look at reader and author discussions on the genre, alongside textual analysis of selected works, proves that romance fiction is not fixated on a clichéd plot and descriptions of sexual intercourse; it involves complex themes that are disguised as stereotypical genre elements. Readers' online debates demonstrate how this romance "formula," albeit a function of its commodification, engages them in addressing quandaries related to societal preoccupations. The concluding study of romance reading in India further supports the possibility of multiple, even liberating, readings that can empower romance readers.

And I'm happy to say that you can download a pdf of the whole of Jayashree's thesis, which is stored at the University of Minnesota's Digital Conservancy database.

The image is from Wikimedia Commons.
Posted by Laura Vivanco at Wednesday, March 04, 2009