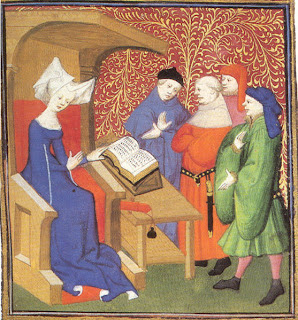 However, the original Event did spark some thoughts which still seem relevant. They're mostly Sarah's thoughts, so I'll quote from her at length, but I'll also throw in something that Sandra wrote recently, as well as mixing in a good stiffening of Northrop Frye and a sprinkling of quotes from a variety of other sources. I hope the end result won't be too indigestible.

The one thing this exercise has done for me is show me again how different are the tasks of reviewing and literary criticism. [...] I can analyze a book I despise (did it for my dissertation!), because it’s not about personal taste, but about what I can say about the book’s _______ (construction, organization, historical context, images of gender/class/race, etc.). When I was a baby graduate student, one of my advisers said “It’s not about whether I like the book, but whether I can say anything interesting about it” and I was horrified! Shocked, I tell you! And I promised myself I’d never get to that point. But getting to that point was what learning how to be a literary critic was all about. And I actually ended up arguing in my dissertation that analyzing books we dislike is *important* to understanding the culture we’re trying to analyze. It’s just as important, in fact, as analyzing books we love. [...]

As my husband just pointed out to me as I read this to him, you’ll notice that Laura and Eric and I never said in our posts whether we liked the book. That came up later in comments [...]. Because in reading the book in order to analyze it, liking it or not was not part of my thought process. [...]

All this is to say that I really love reading the reviews [...] but it’s a completely different skill from literary criticism (which is not to say you guys don’t analyze–you do, but in totally different ways from what we do at TMT), and that fact boggles my mind every time I read a really good review, even (especially?) if the book is awful (or, more likely, just not brilliant).

Northrop Frye also described this difference between the task of the reviewer (whom he called "the public critic") and that of the literary critic. He stated that

It is the task of the public critic to exemplify how a man of taste uses and evaluates literature, and thus show how literature is to be absorbed into society. But here we no longer have the sense of an impersonal body of consolidating knowledge. The public critic tends to episodic forms like the lecture and the familiar essay, and his work is not a science, but another kind of literary art. (8)

If reviews are "another kind of literary art" that may explain why some of them, the better ones, can entertain, infuriate, amuse and/or move us, even though we may never read the novel the reviewer is writing about.

Literary critics, on the other hand, are much less likely to move their reader emotionally, although we may frequently be irritating and can occasionally attempt to amuse our readers. Literary criticism at its best creates a sense of intellectual awe at the way in which the critic has succeeded in marshalling the evidence from the text and other relevant sources into an orderly, logical form. Frye asks:

What if criticism is a science as well as an art? Not a "pure" or "exact" science, of course [...]. The writing of history is an art, but no one doubts that scientific principles are involved in the historian's treatment of evidence, and that the presence of this scientific element is what distinguishes history from legend. (7)

Everyone who has seriously studied literature knows that the mental process involved is as coherent and progressive as the study of science. A precisely similar training of the mind takes place, and a similar sense of the unity of the subject is built up. (10-11)

Yes, and those like Sandra, who are forced to read the work of fledgling literary critics are more than aware of quite how much training is required in order to master the rules of the subject:
The implication of Frye's assessment that literary criticism is a science is that:

at no point is there any direct learning of literature itself. Physics is an organized body of knowledge about nature, and a student of it says that he is learning physics, not nature. Art, like nature, has to be distinguished from the systematic study of it, which is criticism. It is therefore impossible to "learn literature": one learns about it in a certain way, but what one learns, transitively, is the criticism of literature. Similarly, the difficulty often felt in "teaching literature" arises from the fact that it cannot be done: the criticism of literature is all that can be directly taught. Literature is not a subject of study, but an object of study [...]. Criticism [...] is to art what history is to action [...]: a verbal imitation of a human productive power (11-12).

The reviewer, however, is giving a description of his or her experience of reading a text (for example whether it was a disappointment or a gripping read, how the reviewer related to the characters, whether the plot carried the reviewer along or whether her suspended disbelief crashed to the ground through a plot hole). SB Candy recently wrote a post about "bad taste" in which she stated that

unlike the absolute relativists (how d’you like THAT particular turn of phrase, eh?), I do think there’s such a thing as objective measures for how good or bad a book is, and that sometimes, you love something absolutely terrible, and other times, you dislike something that’s actually good.

The literary critic, as Sarah noted, does not primarily concern him or herself with his or her experience as a reader of the text, or with making declarations about "good" or "bad" taste, but instead relates to the texts in a very different, much less emotional way: placing the text in a literary context, providing textual evidence for his or her assertions, and not deliberately distorting the evidence by omitting to mention counter-evidence also present in the text.

Although there were some dissenting voices, the majority of reviewers seemed to feel, with Candy, that "Wulfric is a politically correct hero, and hot damn, does that ever make him tiresome," and Meriam observed that there is something "deeply ironic [in the fact] that a novel which disproves many of Bindel's charges against romance failed to satisfy so many romance readers. What can you do?" Some time ago Jayne Ann Krentz wrote about some young editors who tried to change the genre in response to criticism like Bindel's:

The first target of these reforming editors was what has come to be known in the trade as the alpha male. These males are the tough, hard-edged, tormented heroes that are at the heart of the vast majority of bestselling romance novels. These are the heroes who made Harlequin famous. These are the heroes who carry off the heroines in historical romances. These are the heroes feminist critics despise.
[...] Why did we dig in our heels and resist the effort to turn our hard-edged, dangerous heroes into sensitive, right-thinking modern males?
[...] We did it because, in the romance genre, the alpha male is the one that works best in the fantasy. (107-108, emphasis added)

I'm a literary critic, not a psychologist, so I'm not going to venture into in-depth discussions of people's fantasies, particularly when they're ones I don't share, but I think this internet event has been more than a condensed version of that long-ago experiment described by Krentz. As Sarah said, it's illustrated the difference between reviews and literary criticism, and from the point of view of literary criticism, as Eric said on the Romance Scholar list:

This really is a big deal [...] because for the first time that I know of romance readers and reviewers and scholars are all focusing, however briefly, on the same book at the same time, as part of a concerted effort. (It's also the first time that I know of when a single category romance has been written about at length by multiple scholars. Few romance novels get any critical attention at all; I'd love to see this as a model for future group efforts.)

The image is of Christine de Pisan giving a lecture. It's taken from Wikipedia. She wrote poetry, prose and engaged in literary criticism:

As a feminist, Christine de Pizan directly challenged the destructive and demeaning attitudes towards women of a popular book of her day, Le Roman de la Rose, by writing Epistres du debat sur le Roman de la Rose (c. 1402), and arguing rather for the equality of women. (A Celebration of Women Writers).

As we've been discussing ferrets, I can't help but note that this latter work included the line "And do you not know that a small weasel is able to attack and destroy a great lion?"
Posted by Laura Vivanco at Saturday, January 26, 2008