Ask What You Can Do For the Ferrets! 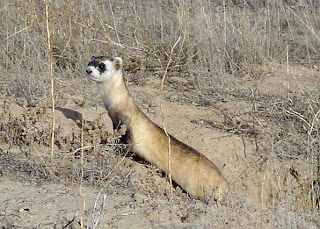 John F Kennedy at his inauguration in Washington on January 20 1961.

It may seem like overstating the case to compare plagiarism to the enemies of world peace, but in the Republic of Letters, plagiarism is the act of annexing another author's words. As Paul Tolmé, one of the authors whose words made their way into a Cassie Edwards novel, recently said:

Plagiarism victimizes writers. It betrays the trust of readers. It tarnishes the craft of writing.

But there is another victim here that has been lost in the discussion: the ferrets.

I hope that all the discussions that we, as a community of readers and authors, have been having recently about the issue will indeed be "a beginning - signifying renewal." I hope there is now greater understanding of what plagiarism is and why plagiarising from either fiction or non-fiction sources is wrong. I also hope that authors won't become overcautious, censoring themselves out of fear of being accused of plagiarism, because as Eve Gray says

All writers take over stuff from previous writers, incorporate it, allude to it, transform it. The essence is transformation. It is difficult to define the boundaries, but in the hands of a good writer, the borrowing becomes transformed into something new

And if you feel moved to do something positive for those victimised ferrets, you can join Nora Roberts in doing so.

[Edited to add: the Smart Bitches and their readers have now met Nora's challenge, so the Smart Bitches are now suggesting some other charities, related to topics described in Cassie Edwards's novels, which might appreciate donations.]

The picture of a black-footed ferret is from Wikipedia.
Posted by Laura Vivanco at Wednesday, January 16, 2008

Email ThisBlogThis!Share to TwitterShare to FacebookShare to Pinterest
Labels: plagiarism