History, Her-story, and the Historical Romance

On the RWA's conference blog Roxanne St. Clair wrote that


It’s true, it’s true: the historical romance novel is alive and selling! In the words of a buyer from one of the major chains, historicals are “trending up” for the first time in a while. This is especially true of the bestselling authors of historical romance, and booksellers are closely watching the numbers of new and midlist authors in this sub genre, because increased sales from those authors is the sign that the trend is real and lasting. Terrific news for the hundreds of writers and millions of readers of the beloved historical.1

I've written about history in historicals before, but I just came across the current issue of Working Papers on the Web (Volume 9, December 2006), on the topic of Historicising the Historical Novel and apart from being interesting in its own right in its analysis of historical fiction, it also raised some issues which are equally relevant to historical romances. According to Chris Hopkins "for both authors and critics, the form of the historical novel seems unavoidably caught up in doubts, assumptions and debates about the nature and status of history and of fiction, about relationships between past and present". Gillian Polack questioned a number of authors of historical fiction and concluded that


writers who use the Middle Ages in their fiction are more likely to have an emotive link with the period or to consider it as a tool to enhance their fiction than to have a purely empirical approach. The 'facts' of the past are subsets of a dedication to bringing a higher truth to the public or to telling a story or to exploring a personal love for a place a time or a person.

This, and the fact that the novels are published by "publishers supposedly interested more in marketability than in the subjective emotive value of a texts [...] possibly gives the fiction writers' Middle Ages a stronger claim to being the mainstream Middle Ages in wider cultural terms than the scholarly Middle Ages". There are bound to be exceptions, of course, and Sharan E. Newman was one scholar who, irritated by the "wide gap between what scholars learn and teach about the Middle Ages and what the average person believes [...] decided to take another tack in presenting my research to the world: I wrote it into fiction".2

For the literary critic who wishes to analyse historical novels, it may be difficult to determine which historical inaccuracies are deliberate, intended to facilitate the plot, heighten the readers' enjoyment, make a point about contemporary society, or highlight a character's exceptional nature, and which are simply the result of a connection with the "mainstream" of popular knowledge/perceptions of the historical period in which her novels are set.


Most heroines have more education than other females of their time; more than two-thirds experience sexual intercourse before marriage and with more than one man (the range was 2-7 different men), and more than half were raped. One out of three became pregnant before marriage, married more than once, and posed as a man or boy at some time during the story. (37)

Thurston notes that there is "strong evidence that changing social values in today's society have been imposed on these historical settings" (43) but she was not concerned with "the question of what the creator may have intended" because "ultimately the impression the reader is left with - what the reader thought was said and done, and by what kind of people - may be the more significant information" (35-36).3

Authors can certainly use history to make points about contemporary society and politics. Lisa Hopkins' paper on Dorothy Dunnett explores the ways in which


during the course of the novels she develops a vision of the historical novel as neither Scottian nor nostalgic but a manifesto for the future of Scotland, in which it is seen not as a small and geographically isolated northern country but as a lively and thriving part of a wider European culture.

Yet it is also true that, as Alison Light observed of the historical romances she read as a teenager,


The class politics of many of these novels are often difficult to tease out. Even if we wanted to, they cannot merely be read off from content, not least because many of the settings deliberately pre-date modern class references or terminology and are thereby mystified. (66)

The study of popular fictions will always founder on the rock of ideological purity, clung to in political desperation. Not least because the identifications which all literary texts offer are multiple and conflictual, even irreconciliable. [...] What's clear is that the capacity to fantasize which novels encourage, is notoriously unbiddable, and that for those of us who judge novels by their messages, moral, social or political this has always been a mixed blessing. (69-70)

Nonetheless, Light observed that there was a special focus on women's lives:


historical novels gave me a history I could appreciate. The focus within them is ultimately upon individuals, but especially upon femininities, upon women's lives and loves, their families and their feelings. What the novels manage is to give the concerns of the so-called private sphere the status and interest of history. (59)

In most historical romances the politics of a historical period are rarely foregrounded,4 and this often makes it still more difficult to "tease out" the class politics. Nonetheless, as was the case with the novels read by Light, women and their concerns and interests are placed at the centre of historical romances and, as Thurston found, they may use the historical context to present on a magnified scale some of the challenges which face modern women.

Medieval settings are perhaps more overtly threatening to a heroine, because she may be married off against her will by her father, or abducted by an enemy knight. The armed power of the male characters may present a very clear threat, but it is one which the heroine can be shown to overcome, perhaps through her own mastery of "masculine" skills and/or through courage, intelligence and lateral thinking. In Isolde Martyn's short free online story, Heart of Gold, the Demoiselle Madeleine de Bellegarde-sur-Cher demonstrates all these qualities and abilities. The story shows us a couple who are well-matched, both in archery and in their mental abilities (both are described as "too clever"), and the archery takes on a symbolic as well as a literal meaning.

We can contrast this medieval story with another by Isolde Martyn, A Loving Matter, set in a very much later historical period (it's very short, so I'm not sure if it's set in the Victorian period or slightly earlier). I wonder if the associations readers have of this period, at least in part due to reading "trad Regencies" is that this was a time of strict social conventions. Women in this period run the risk of becoming inspid or spiteful, and in the face of the challenges posed to her autonomy and success the heroine tends to respond with intelligence, witty repartee and a willingness to bend the rules at least a little. Both in the Regency, where the rules governing entry to Almack's were determined by an all-female committee, and in the Victorian period, when Britain was once more ruled by a Queen, the social rules and the threat to an independent-minded heroine may come as much from women as from men. In Martyn's story their presence may only be inferred, but what is more than clear is that the hero himself poses no threat. 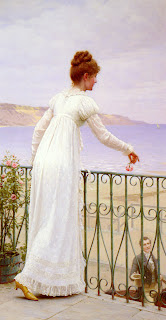 I'm aware that I'm generalising wildly about romances set in both these periods but I think it's fair to say that each historical period has a particular "flavour" for readers5 which allows authors and readers to explore issues related to women's roles, femininity, masculinity and male/female relationships in a different way.

Eloisa James, for example, has compared the Regency and Georgian periods:


The Regency period is great fun to write about in part because of the codes that governed the behavior of men and women regarding marriage, courtship, adultery, etc. It’s a challenge to create characters who are historically accurate (or reasonably so) and still engage the sympathy of thoroughly modern women. It’s also a challenge to design the courtship of two characters who are not supposed to be private together or even kiss.
I started thinking about the Georgian period because there were so many fewer strictures. Basically, society was a lot wilder.

They had the arts, yes...but most people, even the nobles, were working hard for food, shelter, and security. In my medieval books, therefore, sex is fairly simple. Gentle at times, even playful, but down-to-earth. I don't think most people had time or energy for decadence!

----1 According to Jane at Dear Author the situation may not be quite so promising: "Tommy Dreiling, the buyer for Barnes and Noble, [...] said that the trends are similar to those reported at Borders. [...] Historical romance sales were author driven, meaning that some authors like Sabrina Jeffries, were selling tremendously well but others were not".

2 Here is a list of some of the more common 'myths about the Middle Ages'.

3 There, are, of course, problems involved in determining what 'the reader' thinks or feels about a text given that reader perceptions differ.

4 I discussed politics in contemporary romance novels here, and an example of a historical romance which devotes considerable space to an exploration of the politics of the period is Carola Dunn's Crossed Quills.

5 Whether or not this "flavour" is historically accurate is an issue I'll have to leave to historians to determine.

The paintings are both by Edmund Blair Leighton. The first is "Stitching the Standard" and the second is "A Favour", and both are from Wikimedia Commons. In 1897 Gleeson White, "a writer and journalist on art" wrote that Leighton's paintings were "the pictorial equivalent of light literature, of belles letters, of graceful novels".
Posted by Laura Vivanco at Wednesday, July 18, 2007