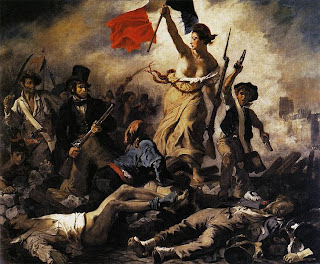 There's been a vast amount written and debated in the last week about the romance genre and the lack of respect it receives.1 I'm not planning on re-opening the debate with regards to suitable attire for romance authors because I'm sure anyone who's read all the posts and comments here, here, here and here will (a) have a good idea of the various standpoints on the issue and (b) have eye-strain.

I'd just like to observe that the study of popular culture is relatively new. Back in the late 1960s and 1970s when

it was the case that

To the extent that popular culture was being examined back then, it was through the telescopic lens of history or with the long, cold tongs of the social sciences. But Browne insisted on also looking at contemporary material and applying to it the kind of close, comparative analysis that had previously been reserved for highbrow culture. (Salon)

As Catherine Morland once observed, history could be described as "The quarrels of popes and kings, with wars or pestilences, in every page; the men all so good for nothing, and hardly any women at all" (Austen, Mansfield Park). Nowadays, however, historians use a much wider range of source materials and have rewritten histories to include women, children and the lower social classes. This opening up of new areas of research and a new appreciation for previously neglected texts and objects has led to the creation of new collections such as the

Browne Popular Culture Library. The BPCL, founded in 1969 and dedicated to the acquisition and preservation of research materials on American popular culture (post 1876), is the most comprehensive repository of its kind in the United States. (website)

Such collections bring together these otherwise ephemeral resources in order to preserve them and make them accessible for academic study. The online databases at Streetprint.org serve the same purpose. All of them are collections of works of popular culture from chapbooks to street art and from Canada to Eritrea.

Here's a link to a 'penny dreadful',2 The Illustrated Family Novelist, from the Revolution and Romanticism database, which contains the short story of A True Woman by Miss Minnie Young. [If you look below the page there's an option to 'view larger image', followed by [+] and [+] and if you click on that larger [+] you can read the text more easily and move forwards through the text using the arrows at the sides of the pages.]

Here's Margaret, our heroine, talking to Dr Harley, her secret admirer, about the song 'The Lorelei' [lyrics by Heinrich Heine (1823) and music by Friedrich Silcher (1789-1860)]:

[Margaret] "I don't think I sympathise very much with the story, or rather with the luckless hero. Wasn't the Lorelei supposed to be soulless?"
[Dr Harley] "Yes"
[Margaret] "And the fisherman flung away his life for such a being?"
[Dr Harley] "He wasn't the first man who has flung away his life for a woman without a soul."
[Margaret] "That is very likely; but I can't sympathise with such a feeling."
[Dr Harley] "He was in love?"
[Margaret] "He was infatuated."
[Dr Harley] "Are they not convertible terms?"
"Certainly not," she spoke with some scorn; and then, seeing the expression on her companion's face - he only spoke thus to try her - she changed her tone. "But some people are so fond of talking as if love and folly were synonymous."
"Because so many people act as if they were. Of course they are not. The highest love is subordinate to reason, to honour, and to duty. When man or woman sweep down these barriers it is generally through the weakness of their principles rather than by the strength of their feelings." (page 5)

Given her views on love and folly I have the impression that Margaret might well disagree with the comment in the Text in Transit: A Guide to Genre in Popular Literature database, in the item on "Comic Romance", to the effect that "Romance and relationships are inherently ridiculous".3

In comparison with history, the study of popular culture, that "vital area of study that offers new insights into our history, beliefs, diversity, emotional make-up, and socio-economic relations" (Portland State University) is still a relatively young discipline but already it has changed (revolutionised?) the way we think about what would once have been termed "low culture". Further study of both the romance genre as a whole and of individual romance novels will, I hope, contribute to a more nuanced approach to the genre, one which acknowledges the diversity of cultures, ideologies, and, yes, levels of literary merit, which are present in this huge and varied genre.

---
1 I would like to observe that "respect" is not synonymous with "respectability". The former, according to the OED can mean "a feeling of admiration for someone because of their qualities or achievements" or "due regard for the feelings or rights of others" whereas the respectable is what is "regarded by society as being proper, correct, and good" or is "of some merit or importance".

2 The term "penny dreadful" is not a complimentary one. Romances have suffered from similar labelling problems, with many described as 'bodice-rippers' despite the fact that they contained no descriptions of clothing being shredded. Kathleen Woodiwiss

3 Links to short descriptions of other romance sub-genres covered by the database, and a few examples of covers from each sub-genre, can be found here.

----
The painting is of Liberty Guiding the People, by Eugène Delacroix, from Wikipedia. She may perhaps also be considered the embodiment of popular culture. She demands respect, not respectability, and her bodice, while unripped, is revealing. It's a costume which, while suitable for an allegorical figure, would certainly not be considered normal, professional wear for an author.
Posted by Laura Vivanco at Monday, July 23, 2007