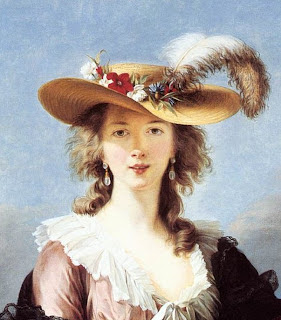 My fellow musketeers are rather busy at the moment, so I've put on my musketeer hat and in the spirit of 'one for all' I'll give a very brief summary of their papers (I'm sure they'll come along later to discuss them in more detail) and then tell you a bit more about my own.

The 20th annual Feminist & Women’s Studies Association (UK & Ireland) Conference, on the topic of Feminism and Popular Culture, was held at Newcastle University from June 29th to July 1st 2007. I was only there on the 30th of June, but both An and Sandra were there for the whole conference so will be able to give an overview of it.

An began the session on the romance genre with her paper on 'voice' in the romance genre, examining handbooks or guides to writing romance. While these guides acknowledge that writers must be aware of the genre's conventions, they also encourage each writer to develop her or his own distinctive voice.

Sandra continued by looking at the ways in which the heroines of modern historical romances are not damsels in distress who wait passively for rescue.

I concluded the panel with my paper, titled Feminism Revisits Mills & Boon: Second and Third Wave Contexts and Struggles in Two Mills & Boon ‘Lines’. I had to condense my findings for the conference, and I'm going to condense them yet further here, because there simply isn't space, so I apologise in advance if I appear to be making sweeping generalisations without offering any textual evidence for my claims.

I picked up on An's point about the way that romances vary. This variety is evident even within individual lines. These authors are not like the members of the Top Secret Drumcorps who you can see here, performing at the 2006 Edinburgh Military Tattoo, all marching in step, producing a near-identical product.* One cannot, therefore, assume that all the novels, even within a line, have precisely the same tone or that all the authors share similar attitudes. Thus while I found many romances which could be considered feminist, and while the authors I corresponded with identified as feminists, there were a few novels which were anti-feminist in tone and yet others where feminist issues simply didn't arise in the course of the story.

That said, I think one can find parallels between the social and economic contexts in which many heroines of the Mills & Boon 'Modern' / Harlequin Presents line find themselves, and society as critiqued by Second Wave feminists. One could characterise the line as being one where there is conflict between men and women, creating an impression of a battle of the sexes, or, in the words of the Harlequin guidelines:

With its focus on strong, wealthy, breathtakingly charismatic alpha-heroes who are tamed by spirited, independent heroines, the central relationship in a Presents novel is a provocatively passionate, highly charged affair, driven by conflict, emotional intensity and overwhelming physical attraction.

In the cases where the hero is sexist, he is generally brought to acknowledge the error of his ways and he apologises to the heroine. By the end of these novels she has achieved sexual fulfillment, equality within marriage and the freedom to pursue her career should she wish to do so. In the novels where the hero is not a sexist but the heroine has been oppressed by another man (possibly a dictatorial father or an abusive/controlling former lover) she overcomes past hurts and fulfills her potential.

The second line I looked at is the 'Romance' line and the heroines of this line find themselves in a context which more closely resembles those in which Third Wave Feminists have reached adulthood.** In this line heroes and heroines are much more likely to be presented as equals from the start: the guidelines state that the novels must be 'About a hero and heroine who are equal (they need each other; their strengths and weaknesses balance the other's)'. An issue which arises not infrequently is that of combining work and family obligations (for both men and women) and as the UK's Equal Opportunities Commission recently stated,

The reality is that unless women can combine work and caring roles successfully, they are unlikely to reach the top in great numbers. What’s more, all women will continue to experience a thin veneer of equality, that cracks as soon as they have children or take on caring responsibilities. Far too many workplaces still follow a long hours, inflexible model of work. This has never worked well for women and is increasingly out of date for the ever-growing number of men who say they want to be more involved at home. (2007: 6)

----* Yes, I'm mostly including these drummers because their uniform resembles that of the musketeers (they even perform a 'battle scene' while drumming), and because their level of skill is quite astonishing in its precision, but I also think that their uniformity contrasts with the immense variety of sub-genres and voices to be found in the romance genre.

** See, for example, the prologue of Manifesta , in which the authors, both Third Wave Feminists, note that they were born in the 1970s, 'a decade that would change dramatically the lives of American women' (Baumgardner & Richards, 2000: 3) and describe what 'a day without feminism' would be like. The first few pages of this prologue can be read online here (click on 'excerpt'). One summary of the differences between the three waves of feminism is as follows:

The first wave of feminism was concerned with giving women the rights of citizenship. The second wave worked towards equality under the law in pursuing equal opportunity everywhere. As Baumgardner and Richards explained in Manifesta, third wave feminism is still pursuing second wave goals, but third wave feminists are a generation reared within the privileges of feminist accomplishments, such as Title IX, Roe vs. Wade, the outlawing of gender discrimination, a continuing front on domestic and sexual abuse, and a lexicon created, sustained, and evolving to theorize gender.

The image is a cropped version of Élisabeth-Louise Vigée-Le Brun's Self-portrait in a Straw Hat, 1782 (from Wikipedia). Given her achievement in becoming a member of 'the prestigious and almost entirely male Académie Royale' (The Getty Museum), hers is a suitable image to accompany a post about feminism. I also liked the hat which, though not strictly a musketeer one, is similar in style.
Posted by Laura Vivanco at Sunday, July 08, 2007