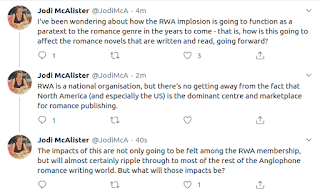 
been wondering about how the RWA implosion is going to function as a paratext to the romance genre in the years to come - that is, how is this going to affect the romance novels that are written and read, going forward?
RWA is a national organisation, but there's no getting away from the fact that North America (and especially the US) is the dominant centre and marketplace for romance publishing.
The impacts of this are not only going to be felt among the RWA membership, but will almost certainly ripple through to most of the rest of the Anglophone romance writing world. But what will those impacts be?

It's because of the importance of the RWA to the genre as a whole that I feel it's important to keep recording some of the details of the current crisis here at Teach Me Tonight, even if all of those details don't seem directly about the academic study of romance.

I didn't want to keep updating my previous two posts about the RWA (1) and (2) so I'll add some updates here.

There was coverage on 27 December from The Seattle Times and since it's an AP article it appears in the same form in The Washington Post. The article is focussed on the situation as it relates to Courtney Milan. This does not mention the fact that the RWA appears to have created an Ethics Committee for this process which by-passed the existing Ethics Committee. Rachel Grant (who was on the Ethics Committee) states that a new committee was created "without informing the existing committee that was never informed of the complaint"

In addition to the implications of the specific complaints against Courtney Milan, the details of the ruling against her, concerns about the processes according to which it was handled, etc 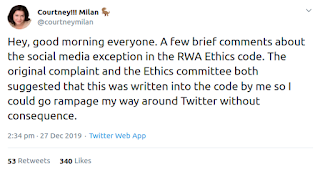 there are broader concerns about how complaints have been handled and used in the past: 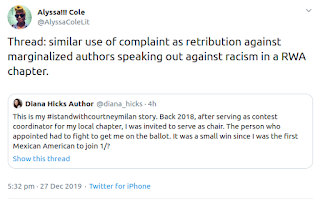 2) By contrast, it appears that formal complaints made by marginalized authors/about discriminatory language used to refer to people from marginalized groups did not reach the Ethics Committee and neither was further action taken.

Katee Roberts reports that she asked the RWA Office about this in relation to complaints by Olivia Waite and received the message that "Olivia Waite's Ethics complaints in fact were reviewed by the office. The subjects of those complaints subsequently resigned their membership and at that point, there were no longer matters to bring to the Ethics Committee."

However, according to Olivia Waite "the person I reported for saying queer women were as repulsive as alcohol addiction (on the RWA forums!) has not withdrawn, as staff claims. Not only is she an active member, she is currently the treasurer of her local chapter."

[Edited to add: Olivia Waite points out a loophole in the procedures which may have allowed the Executive Director to process complaints informally rather than sending them to the Ethics Committee through the formal procedure. However, the use of the informal procedure is supposed to involve the consent of the complainant, and Olivia Waite did not consent to it. Robin Covington corroborates that the staff have "strenuously urged" the "use [of] this informal process but I refused. When I did I was encouraged to drop them [both complaints]. Neither went anywhere."] 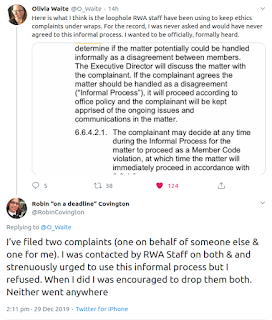 Concerns have also been raised about:

1) The interpretation/application of the membership requirement of “proof of serious pursuit” of a career in romance writing, as detailed by Xan West here and another case which is linked to on this thread.

The rejected applications contained the requisite "central love story and an emotionally satisfying and optimistic ending" (RWA definition of romance).

Karin Kallmaker was refused entry to PAN (the Published Authors Network) despite being a multipublished author: 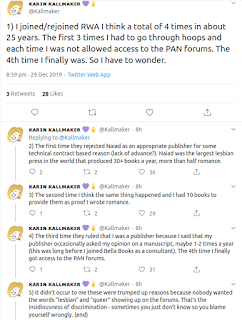 I joined/rejoined RWA I think a total of 4 times in about 25 years. The first 3 times I had to go through hoops and each time I was not allowed access to the PAN forums. The 4th time I finally was. So I have to wonder.
The first time they rejected Naiad as an appropriate publisher for some technical contract based reason (lack of advance?). Naiad was the largest lesbian press in the world that produced 30+ books a year, more than half romance.
The second time I think the same thing happened and I had 10 books to provide them as proof I wrote romance.
The third time they ruled that I was a publisher because I said that my publisher occasionally asked my opinion on a manuscript, maybe 1-2 times a year (this was long before I joined Bella Books as a consultant).
The 4th time I finally got access to the PAN forums.
It didn't occur to me these were trumped up reasons because nobody wanted the words "lesbian" and "queer" showing up on the forums. That's the insidiousness of discrimination - sometimes you just don't know so you blame yourself wrongly.

2) Inequality in other contexts, including one Chapter of the RWA paying "black speakers half the rate they usually pay" 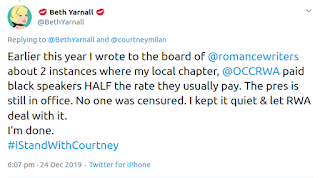 Melissa Blue, one of those speakers, gives more details here.

Here are some reader responses, from Wendy the Super Librarian , Smart Bitches Trashy Books and from Lynn Spencer at All About Romance.

An open letter has been composed, from readers to RWA. It will remain open to signatories until 29th December. I have added my signature to the letter.

In an astonishing turn of events, communications have now been released from both the former and current presidents, respectively Carolyn Jewel and Damon Suede. These suggest that the Board made its original decision on the basis of information provided by current RWA president Damon Suede (at the time the Board members had not seen the original text of the complaints): 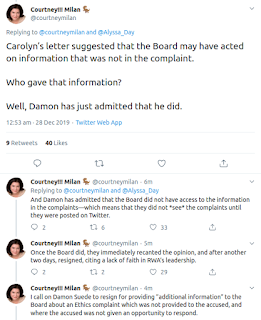 The above image is only part of the message from Damon Suede, which can be read in full here.

[Edited to add: another surprising fact emerges from a different communication sent by Carolyn Jewel to Carrie Lomax. 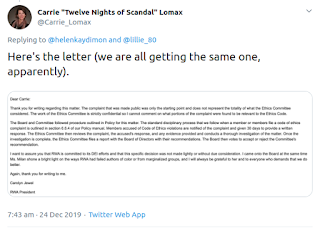 One of the things stated is that "The complaint that was made public was only the starting point and does not represent the totality of what the Ethics Committee considered." Jewel adds that "The Ethics Committee then reviews the complaint, the accused's response, and any evidence provided and conducts a thorough investigation of the matter." Claire Ryan has transcribed this communication in full here, along with a time-line of events.

This means that it is unclear both exactly what the Ethics Committee considered and what information was provided by Damon Suede to the Board.]
Posted by Laura Vivanco at Saturday, December 28, 2019