One indication of the seriousness of the situation underlying the decision made against Courtney Milan, was the resignation of one of the Board of Directors on 25 December 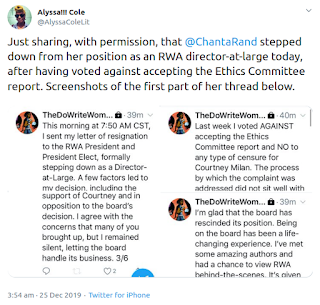 As shared by Alyssa Cole, Chanta Rand stood down as a Director-at-Large, having voted against accepting the Ethics Committee Report.

This was followed, on 26 December, by the resignation of a large group of the Board, who cited a lack of trust and confidence in the RWA leadership: 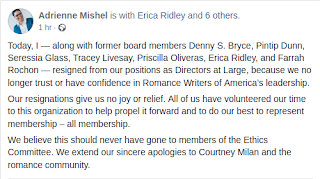 Today, I — along with former board members Denny S. Bryce, Pintip Dunn, Seressia Glass, Tracey Livesay, Priscilla Oliveras, Erica Ridley, and Farrah Rochon — resigned from our positions as Directors at Large, because we no longer trust or have confidence in Romance Writers of America’s leadership.
Our resignations give us no joy or relief. All of us have volunteered our time to this organization to help propel it forward and to do our best to represent membership – all membership.
We believe this should never have gone to members of the Ethics Committee. We extend our sincere apologies to Courtney Milan and the romance community. 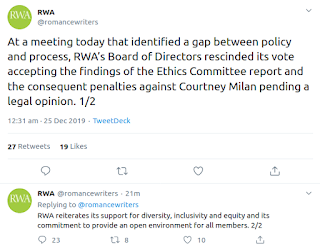 rescinded its vote accepting the findings of the Ethics Committee report and the consequent penalties against Courtney Milan pending a legal opinion.
RWA reiterates its support for diversity, inclusivity and equity and its commitment to provide an open environment for all members.

A great many others have resigned as members and/or as RITA judges. In the process, many irregularities have come to light in the way that some members, and some complaints to the Ethics Committee, have been treated over the years. Here's just one example, from Professor Piper Huguley

Some hard questions must be asked about the role that RWA staff played in this. In the midst of this uproar, my mind goes back to the 2013 Rita/GH reception and how I was blocked from entering EVEN THOUGH I had on my pink ribbon. I was the only Black finalist on either side.

Xan West has written a post with links to many of the issues raised, and details of their own experiences. Ivy Quinn's post here, while from 2017 and specifically focused on Linda Howard, gives some more perspective on the background to the current crisis. Racheline Maltese offers a succinct summary: 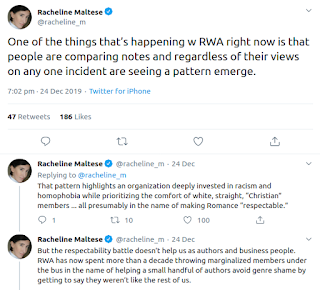 One of the things that’s happening w RWA right now is that people are comparing notes and regardless of their views on any one incident are seeing a pattern emerge.
That pattern highlights an organization deeply invested in racism and homophobia while prioritizing the comfort of white, straight, “Christian” members ... all presumably in the name of making Romance “respectable.”
But the respectability battle doesn’t help us as authors and business people. RWA has now spent more than a decade throwing marginalized members under the bus in the name of helping a small handful of authors avoid genre shame by getting to say they weren’t like the rest of us.

Edited to add: The New York Post has published an article about the whole situation, as has The Mary Sue.


a chapter dedicated to advocating diversity and inclusion within RWA and publishing as a whole wrote to the national committee today officially calling for the resignation of the president, president-elect, & executive director

Their detailed response email to the RWA can be found further down the thread. They have been joined in this request by 28 "local RWA current and incoming chapter Presidents", whose full letter can be found on this thread.

The RWA have issued a couple of statement documents.

Do better or I’ll start talking about my last day as president, 8/31. The arguments I had. The fight about the improper use of the ethics committee. My concerns about bias. How we veered from our common practices. This disaster could have been avoided.

Romance reader Ridley asked rhetorically whether all of "the board members who aren't white have resigned, and the white folks who remain will choose replacements?" To give Courtney Milan the last word about the RWA responses:

On second thought, I actually think that letter says a lot. I think the between the lines is “sorry marginalized authors if you can’t stay with us because you’ve lost trust, but we will be here for the rest of you.”