The Scientific Study of Fiction

Laura Vivanco
I hadn't come across the International Society for the Empirical Study of Literature and Media (IGEL) before, and I thought some of TMT's readers might not have either, so here's a very short post about IGEL and the scientific study of literature. The society

is aimed at the advancement of empirical literary research through international and interdisciplinary cooperation. The principal duties of the Society are to support scientific projects through information and cooperation, to further personal contact in all areas of research supported by the Society, to support students and junior researchers in the field of empirical literary research, to press for the application of empirical results, and to organize international conferences. 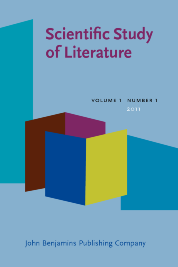 The first issue of IGEL's journal, Scientific Study of Literature is due to appear in 2011:

Literature has an important role in human culture. Broadly interpreted, literature is defined as all cultural artefacts that make use of literary devices, such as narrativity, metaphoricity, symbolism. Its manifestations include novels, short stories, poetry, theatre, film, television, and, more recently, digital forms such as hypertext storytelling. This new journal, Scientific Study of Literature (SSOL), will publish empirical studies that apply scientific stringency to cast light on the structure and function of literary phenomena. The journal welcomes contributions from many disciplinary perspectives (psychological, developmental, cross-cultural, cognitive, neuroscience, computational, and educational) to deepen our understanding of literature, literary processes, and literary applications.

According to a post at OnFiction, that "first issue should appear mid-2011, and will include a number of short pieces from leaders in the field with their thoughts on the future of the empirical study of literature." OnFiction is

a magazine with the aim of developing the psychology of fiction. Using theoretical and empirical perspectives, we endeavour to understand how fiction is created, and how readers and audience members engage in it.

Articles are added twice a week, and we maintain archives of academic papers, magazine articles, film and book reviews, original fiction, as well as annotated lists of psychologically significant works of fiction and books on the psychology of fiction.

One of the more recent posts was about Janice Radway's Reading the Romance.
Posted by Laura Vivanco at Thursday, September 23, 2010