Are You a Feminist or a Flower?: White Hibiscus by Rosemary Pollock 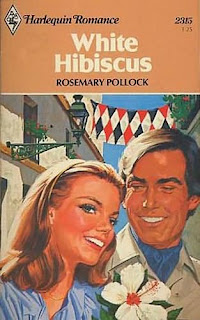 Since we've been looking at Heather Schell's suggestion that evolutionary psychology may have been used by romance authors in the 1990s to defend the genre against feminist critics, I thought it would be interesting to look at another conjunction of feminism, romance and ideas about evolution, but this time in an older romance. Two significant differences here are that
Ann Rosalind Jones's essay "Mills & Boon Meets Feminism" was published in 1986 and it explores feminism and whether or not it is compatible with romance. This seems to have been an issue which preoccupied many romance authors at the time, as Jones discovered when she began her research:

reading them recently, I have confronted the most recent trends in the genre. I was astonished to find that every novel I read (sixteen, all published in 1983-4) either refers explicitly to feminism or deals implicitly with issues feminism has raised: women's work, their economic and psychic independence from men, their sexuality - or what might better be called the shifts in 'manners' around heterosexual attraction and pursuit. (197)

She also found that a significant proportion of "writers and editors are now willing to experiment in liberal-feminist directions" (211) and that,

Without any direct reference to feminism, the standard romance plot may nevertheless reconstruct relations between the sexes. By page 140 of the required 180, nurturant men and competent women occupy test situations that supersede conventional gender roles.
But overt references to feminism are much more problematic in Mills & Boon. The term itself, like the demands and debates associated with it, produces striking ambivalence in these novels, even when they register changes that are feminist in effect. (201)

and "At one extreme, Mills & Boon uses feminism in mocking or antithetical ways, to initiate a counter-movement" (202). White Hibiscus, by Rosemary Pollock, was published in 1979 and is located at this extreme end of the spectrum:

'Good evening. You're very punctual.' Turning away from her, he opened the door of the car, and while she climbed inside he held it.
'I didn't want to keep you waiting,' she said demurely.
Still frowning, he got in beside her. 'That's rather unusual.'
'Unusual? Why?'
Allowing himself a brief smile, he looked straight at her. 'I don't know many girls who believe in punctuality.'
There was a tiny pause, then she said crisply: 'I don't think women should expect pointless privileges. Keeping people waiting is just bad manners.'
Paul turned his key in the ignition, and the car swung round. 'I take it,' he observed drily, 'you're not a supporter of the Women's Liberation movement?'
'No, I'm not. I don't see why one should deny one's femininity. But being inconsiderate isn't particularly feminine.'
He nodded. That's an interesting point. (114-15)

It's an interesting passage, certainly. Given that there's no refutation of the claim that most women don't "believe in punctuality," the implications seem to be that
Feminism is mentioned again later in the novel when Emma is at a press conference and a journalist asks her whether she "was normally in the habit of wearing a bra - afterwards going on to ask how she felt about Women's Lib" (142). A reader is presumably supposed to know that the journalist is referring to feminist bra-burning (although this never actually happened). The overall effect of these questions and of Emma's earlier comments is to imply that feminism is ridiculous and focussed on trivialities.

Referring to other kinds of scenes in Mills & Boon romances, Jones noted that

the imagery that recurs in love scenes [...] belongs to a discourse that links sex to nature: built into the body, eternally the same. [...] But the appeal to primordial drive often has a forced quality, as if the formula is in need of emphatic reassertion. (210)

There are no explicit sex scenes in White Hibiscus, but the "appeal to primordial drive[s]" and the implication that biology is immutable are nevertheless present in the text. Paul, the hero, is Maltese, and on her arrival in Valetta, Emma (who is English) feels that there is "something primitive about the place" (14). Perhaps because of this Paul believes that he understands primitive biological drives. He initially assumes that Emma has "dubious morals" (43) and he later explains his

attitude to women. I believe that a girl like you is entirely vulnerable - morally helpless. Consciously or unconsciously, she believes that she has been put into the world to capture a man, and everything she does is motivated by that belief. She is determined to acquire a mate, and if allowed full control of her own life she will go to any lengths to achieve her ambition. A man has only to say that he loves her, and she will go away with him - because her instinct tells her that this is her destiny. Her instinct, however, is like a badly programmed computer - it doesn't understand that the man she is planning to sleep with has no intention of bringing up her children. (49)

It's almost as though Paul is an early proponent of evolutionary psychology. However, Paul's "attitude to women" presumably allows for the existence of a few women who are somewhat different because it seems that he eventually comes to agree with his sister that Emma is "such a nice girl" (42). He certainly decides that

'You are unusual. For an English girl.'
Her eyes widened. 'English girls don't drink such a lot.'
Paul laughed. 'No, perhaps they don't. But often they are very sophisticated. Very - liberated.'
'And you don't approve of liberated women.'
'Naturally not. They are all fundamentally miserable.'
'Do you really think so? [...] It's something I haven't thought about all that much. But - well, I suppose I'm "liberated". I do more or less as I like. Nobody organises my life. And I say what I think.'
He studied her. There was something in his eyes she didn't quite understand. 'That's different,' he remarked softly. 'That's just - being yourself.' (124)

I wonder if that "something in his eyes" implies that what he's really saying here, in a way which Emma fails to understand, is that he believes most English girls are promiscuous, and that this makes them "fundamentally miserable." Given that Pollock uses the term "Women's Liberation" to refer to feminism, the repeated use of the word "liberated" here perhaps also suggests that Paul's comments identify the miserable, promiscuous "English girls" as feminists.

In reversing his initial opinion that Emma is an "English model with dubious morals" (43) he admits that "when I first met you I formed a certain impression. I was wrong. [...] You are vulnerable" (87). This kind of vulnerability is presumably different from the vulnerability he mentioned earlier and defined as meaning "morally helpless" (49). In requiring Paul's protection from sexual harassment by other men, Emma demonstrates that she is not "morally helpless," just physically helpless, and this is emphasised by the fact that she also needs him to rescue her from a series of physical threats: sunstroke, drowning, and being trapped part way down a cliff.

Yet even "nice girls," with morals, are apparently ruled by some unchanging instincts, for Paul informs her that although some things have changed since "the days of Carthage" (156), "a man is always a man - that doesn't change. [...] Women, too. Even you, a child of modern England - do you believe that you are so very different from the women of the Phoenician age?" (156).

Carried away by love, however, Paul also seems to think that his beautiful, non-feminist English damsel in distress is unique (if not in the whole of history from the Phoenician age onwards, at least in his own experience): "I have never known a girl like you. You are a perfect flower that opens at the touch of the sun - a white hibiscus blossom" (172-73). The implication seems to be that unlike the "morally helpless" women who "will go away with" any man who offers love, Emma will only "open" at Paul's touch.

Emma, then, appears to be a rare women, who despite being "feminine" is not like other woman and so is not wholly at the mercy of all the biological urges which move them. This is reinforced by the fact that Steve (the first man to sexually proposition Emma) claims that "you're not such an iceberg. You can't kid me you are - not with that hair" (23)? Presumably biology is destiny and "masses of chestnut hair" (14) are to be taken as a reliable indication that a woman has strong sexual appetites. The novel does not refute this reading of Emma's hair but retrospectively one can deduce that although passionate, she shrinks from Steve's advances, because a women like a "white hibiscus blossom" will only open "at the touch of the sun" and Emma the iceberg only melts in response to the sexual advances made by Paul.