Blogging Around: Heyer and Quinn 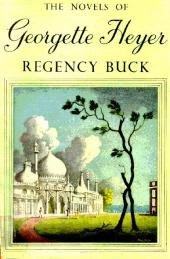 Sarah and I have a blog post up at Austenprose today as part of their Heyer month. We've focussed on Heyer's heroes:

Heyer’s novels, and her heroes, have been so influential in shaping the modern romance genre that the heroes created by modern romance authors either fit or struggle against the molds that Heyer perfected. So the supercilious man-about-town (Worth from Regency Buck), the wild child (Vidal from Devil’s Cub), the villainous hero (Avon from These Old Shades) may all seem like immutable romance archetypes today, but they are that way because Heyer established types that appealed to the romance-reading audience to such an extent that they have been copied and revised and expanded upon in Regency and historical romances for almost a century.

If you'd like to read a bit more about Heyer's novels, Sherwood Smith has written a long and interesting post which compares their depiction of upper-class Regency life to both the fictional worlds of the earlier "Silver Fork" novels and the contemporary social sphere of some of Heyer's contemporaries (she was born in 1902), which some of them depicted in their own novels:

I was struck by a resemblance between Mitford’s work and Heyer’s, specifically the cadences of language, and the outlook: Mitford wrote about Bright Young Things with the charm one remembers of one’s youth. Heyer wrote about them with the charm of one who admired that life, only she sets them in Regency garb, and gives them Regency era slang instead of the distinctive twenties “too-too sick-making” idiom. But, like twenties Bright Young Women, Heyer’s heroines show a tendency to use male slang, specifically that from Pierce Egan’s popular works, which you don’t actually find much of in Austen or her contemporaries. They also show the twenties freedom from constraint, though they are still ladies of birth and breeding.

Finally, better late than never, here's a link to something Eric wrote in May about Julia Quinn's Ten Things I Love About You. His focus is on the hero as a writer of romantic fiction, and he begins by mentioning that he's

read a lot of novels where the heroine is a novelist, often as a way to let the author explore the history or the aesthetics of romance fiction. Quinn does that through Sebastian, but also something new, by having her novelist character be the hero, not the heroine. Sebastian begins writing because he is suffering from the effects of war, he’s unable to sleep and writing helps—specifically, writing about women. He’s a male character working through trauma by putting himself in a woman’s point of view.

You can read all three posts in full if you click on the links to Austenprose, the Book View Cafe Blog and the Avon blog.

The photo of the cover of Regency Buck came from Georgette-Heyer.com. My thanks to jay Dixon for sending me the link to the post by Sherwood Smith.