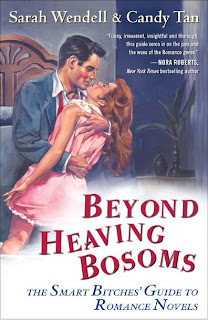 Beyond Heaving Bosoms: The Smart Bitches' Guide to Romance Novels has already been reviewed by Sarah Frantz over at Dear Author but I thought I'd offer a few of my own thoughts here.

Katie Dickson, in her review, describes Beyond Heaving Bosoms as "an authoritative text that will undoubtedly help many a scholar in his or her romance research in the days to come; I should dearly love to see BHB cited in an article over on GoogleScholar" and Sarah F states that it is "invaluable to the academic romance field we’re working so hard to build."1 However, although Sarah Wendell and Candy Tan exhort their readers to "break out your red pen and your English degree! While it's undeniable that romance novels are great fun, they should absolutely be subject to rigorous examination. We lit nerds say so" (7) they also add the caveat that while "There are [...] some excellent academic examinations that subject the genre to a long-overdue analysis. Us? We're here to throw a party for the genre" (1). Thus, although their book contains many serious insights into the genre, these are expressed in a less than academic style (for examples, see the excerpts on their website).

Beyond Heaving Bosoms focuses on issues related to sexuality and gender (although the authors do tackle a number of other issues).2 In this the book perhaps reveals the influence of Sarah Wendell's early interest in the work of Eve Kosofsky Sedgwick:

When my paper [on "the novels of Jude Deveraux and Judith McNaught in particular, notably those that featured love triangles, competitive twins, and similar storylines"] was rejected by the professor on the grounds that I’d chosen an “unsuitable subject matter” for my analysis, I realized it was time to get the hell out of dodge. I left short of attaining my Master’s degree, and gave up any desire to get a PhD.

Sedgwick changed the way I looked at heterosexual relationships within the courtship rituals of romance novels.

It is perhaps because of this focus on sexuality that although Wendell and Tan devote a chapter to "A Brief History of the Modern Romance Novel," in this history the authors

"sweet, savage love" serves as a neat encapsulation of the older style of romances. The turmoil and violence, they runneth over in torrents as mighty as the hero's seed. And speaking of mighty torrents of heroic seed, it was well-nigh de rigeur for the heroine to be raped by the hero in those novels. (12)

The Old Skool, very roughly speaking, ran from the late 1970s through the '80s, while the New Skool started sometime in the late 1980s and continues to the present, but as with any attempts at categorization, there were some books published in the '80s that were in the New Skool mode, and Old Skool-style romances are still occasionally published. (13)

Clearly the distinction between "Old Skool" and "New Skool" romances, and the portrayal of ripped bodices and rape in the former, are important subjects to discuss. However, a history of the genre which begins in the 1970s is incomplete at best, and extremely misleading at worst. Even if one doesn't want to discuss older precursors of the modern genre, including Richardson's Pamela, the novels of Jane Austen and Jane Eyre (to name just a small sample of classic novels which meet the RWA criteria for a romance, namely that it feature "a central love story and an emotionally-satisfying and optimistic ending"), the modern genre did not suddenly come into existence in 1972. And if one's taking a look at romances in which the hero rapes the heroine, why not at least mention E. M. Hull's The Sheik (1919)?

At least one romance by Georgette Heyer, whose first novel was published in 1921, is named later in Beyond Heaving Bosoms, but not in this chapter, and I didn't spot even one mention of: Mary Stewart or other authors of modern "gothic" romances; pre-1945 Raj romances; any of the early authors of inspirational romances including Augusta Jane Evans (whose St Elmo I've discussed in two posts at Teach Me Tonight) and Grace Livingston Hill; or Barbara Cartland. Nor is there much mention of authors of romances in languages other than English, such as Corin Tellado.3 Given the chapter's very tight focus on "Old Skool" and "New Skool" romances, it might have been more accurate to label the chapter something other than "A Brief History of the Modern Romance Novel."

Although I've mentioned the focus on gender and sexuality and spent considerable time pointing out omissions from the chapter on the history of the genre, many other topics are touched on in Beyond Heaving Bosoms. Wendell and Tan


1 Sarah rather sneakily embedded a link in there to the new website for IASPR. It's still under construction at the moment, so there's not a lot of text to read there, but you can see the logo (which includes a speech bubble incorporated into a heart, which I think informs the viewer that IASPR and JPRS are about romantic love and popular culture).

2 I should perhaps note at this point that I was rather gratified to see myself cited on pages 156-57 and 159 (with the quotes taken from a 2006 blog post I wrote about romance as sex education).

3 Wendell and Tan do mention "Littattafan Soyayya," "written in the local Hausa language, [which] 'extoll the values of true love based on feelings, rather than family or other social pressures.'" (131).
Posted by Laura Vivanco at Sunday, April 19, 2009