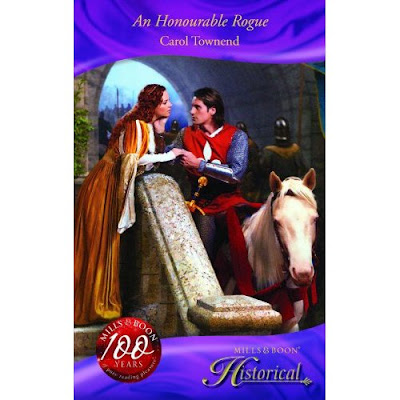 I was quite amused when I realised I was fairly sure what the inspiration was for the cover of Carol Townend's An Honourable Rogue. Take a look at Edmund Blair Leighton's God Speed! 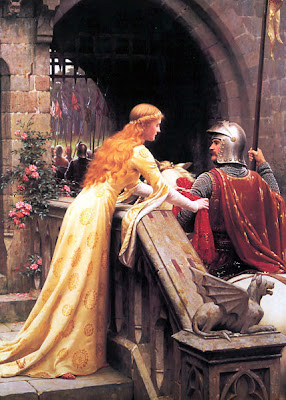 The change to the direction of the horse and rider is extremely appropriate, since Benedict Silvester is not leaving, but rather is making an unexpected reappearance in, Rozenn's life. It's also interesting to see how Blair Leighton's knight has been replaced by a much less warlike traveller, and again that's very appropriate given that Rose wants to marry a knight but finds herself increasingly attracted to Benedict, who's a minstrel (albeit one who carries and knows how to use a sword).1

It may also be worth noting that although there isn't a scene in the novel like the one depicted on the cover, there is a scene in which Benedict holds Rose's hand. Rose's memory of that is described in the excerpt that Townend has on her website:

A memory of the previous night flashed in on her, when she and Ben had been talking to each other with only her table between them. He had held her hand and his fingers had moved gently over hers. So gently. She could almost feel the warmth of his fingertips as she would feel them if he were to lift her hand to his lips.

1 "As a minstrel, Ben had not earned the right to bear full knightly arms, but when on the Duke's business he never travelled without his shortsword" (116).

There's another, longer, excerpt from the novel and a larger picture of the front cover available here. I found the Blair Leighton at Wikipedia.
Posted by Laura Vivanco at Monday, November 03, 2008