Jessica on Heroes and Uncontrollable Urges 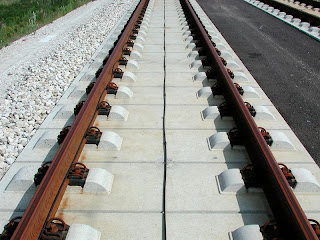 Jessica's written a post, "Runaway Train: Uncontrollable Hero Lust in Romance," in which she provides a lot of textual evidence which suggests that in romances the sexually aroused hero is often described in ways which bring to mind a runaway train. Such depictions suggest that once the hero gets a certain way down the tracks, there's no way to brake in time to stop him going all the way to his destination.

Jessica goes on to explore possible interpretations of, and consequences which may result from, these depictions of what might be termed the "male sexual drive discourse". Here's a quotation which describes this discourse (I also quoted it in an earlier post about rakes):

Foucault (1978), Tiefer (1995), and others have argued that sexuality is constructed within particular sociocultural contexts and discourses. The male sexual drive discourse was identified by Hollway (1984) as a principle discourse in the production of meanings concerning contemporary sexuality. This discourse has its origin in sociobiological views of men's role to pursue and procreate, and hence in the primacy and importance of the male sexual drive.

Themes associated with the male sexual drive discourse are well documented in the social psychological literature. Zilbergeld (1978) identified the following themes: sex is a male performance; the man is responsible for orchestrating sex; a man always wants and is always ready to have sex; for a man, all physical contact must lead to sex; and birth control is the woman's responsibility. Similarly, Reinholtz et al. (1995) included the following in their list of common themes in communication about sexuality: male sexuality as uncontrollable, female responsibility for male sexuality, sex as a force of nature, and men as dominant and women as submissive. These researchers also identified a theme they labeled, "romance," the cultural notion that when two people "fall in love," sex automatically follows and cannot be controlled by rational consideration. (Gilbert, Walker, McKinney, and Snell 755-56)

I'd encourage you to read Jessica's post and join in the discussion at her blog.

[Edited to add: In a follow-up to Jessica's post, Robin explores the "runaway train" as it relates to rape in the genre. I'll give a long quote from Robin's post to give a flavour of her arguments:

1) there is a relationship between the real lives of women and Romance, but I do not believe it is a one-to-one reader-to-book cause-and-effect link. I see Romance more as a representational space in which various issues, anxieties, ideals, moral prohibitions, social boundaries, cultural values, and the like are in negotiation and in play as alternate realities. 2) we can talk about rape in Romance, but it is inevitable that readers will vary widely on how they define it, in large part based on the extent to which the reader consents on behalf of the heroine. 3) because male sexual aggression has so many permutations in Romance, there is no way to conduct a unified analysis under the term “rape” or “rape fantasy” or “forced seduction” or the like, although perhaps we can come up with some general categories and go from there. For example, perhaps we can distinguish rape as a sexual fantasy for the character from rape as a sexual fantasy for the reader, and then further distinguish the reader fantasy by focusing on a continuum of force and consent. 4) in spite of the complicated relationship between real life sexual assault and male sexual aggression in Romance, I do believe that the trope can be read as subversive of real life rape and liberating in ways that relate to the romantic idealism of Romance. That said, I think that there are also some troubling aspects to the trope of male sexual aggression in Romance, and we need to be more willing to investigate them without falling back into the polarized “rape apologist” v. “it’s only fiction” argument that so often emerges around this trope.

Robin's post also examines the law on rape in a variety of different US states: "how those statutes vary reflects not only different views of rape in different legal jurisdictions, but also who wrote the statutes, when they were written, and how the underlying perceptions of rape and female sexuality play into the drafting and enforcement of those statutes." Again, it's a complex post and one I'd encourage people to go and read in full.]


The tracks shown in this post, by the way are from Wikipedia and are sleeper-less, which seemed particularly appropriate because romance heroes often have tremendous stamina. The photo is also rather apt, I thought, because at the point in the narrative Jessica's discussing, heroes tend to have one track minds.
Posted by Laura Vivanco at Friday, November 21, 2008