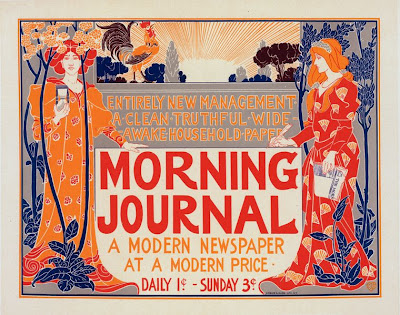 It's the morning, I wanted to post about some journal articles, and those seemed like good enough reasons to include this picture. However, the journal I'd really like to bring to your attention is not the Morning Journal but Teaching American Literature: A Journal of Theory and Practice. As explained in an introduction by guest editor Suzanne Milton,

This special issue of Teaching American Literature: A Journal of Theory and Practice, devoted to essays written about selected contemporary American romance fiction writers, is intended to provide instructors with bio-bibliographical information about several novelists, highlighting primary themes and motifs, with some analysis of the author’s contribution to the genre. Each entry provides a comprehensive list of the author’s fiction works that can be further explored in the classroom. This issue may also be of interest to researchers, librarians and readers who wish to learn more about a particular novelist.

Unfortunately the articles are liberally sprinkled with editing errors (Sarah Frantz's surname was misspelled, for example).

There's lots of food for thought and discussion, though. For example, Milton writes that

contemporary romance can be traced back to the 1980’s when historical romance was still popular, but a variety of sociological trends created a socio-psychological shift and romance writers responded to these changes by creating more assertive heroines who played an increasingly significant role in shaping their own destiny.

There seems to be an implication in there that historical romance is no longer popular, which seems a rather odd idea to me. In addition, although I'm aware that significant changes took place in the genre in the 1980s, I wonder why Milton didn't decide to trace the modern romance genre back rather further than that. I don't think any history of the genre would be complete without some mention of Mills & Boon (now part of Harlequin), which came into existence in 1908 and published contemporary romances long before the 1980s. One might also wish to mention Mary Stewart, who

is considered by many to be the mother of the modern romantic suspense novel. She was among the first to integrate mystery and love story, seamlessly blending the two elements in such a way that each strengthens the other. Pamela Regis writes, "Stewart's influence extends to every writer of romantic suspense, for Stewart understood and perfected this hybrid of romance and mystery and used it as a structure for books so beautifully written that they have endured to become part of the canon of the twentieth-century romance novel." Popular authors continue to list her books among their favorites and cite her as influential to their own work. And even thirty years after publication, her books continue to be reprinted again and again. (MaryStewartNovels.com)

The essays in this volume of Teaching American Literature, which are all in pdf format, are as follows:


I found Louis Rhead's poster for the Morning Journal at Wikimedia Commons.
Posted by Laura Vivanco at Monday, November 10, 2008