Laura Vivanco
There's been a lot of debate at AAR recently about historical accuracy in romances and one poster, MarianneM, noted that:

there have always been rebels, like Lady Hester Stanhope, who are willing to go outside the rules of society, and pay the social price, to defy the rules and triumph. But first the writer needs to know the 'rules and regs' of the society in which his hero or heroine developed in order to show what a triumph his protagonist has achieved in going against those rules.

Madeline Hunter said something similar in a recent interview:

not all women toed the line the way we often think. Some of them did have "modern sensibilities" and chafed at the restrictions. Some of them "worked the system" to have more freedom. Some of them removed themselves from polite society and thrived in other circles, those of the arts for example, where other ideas about women were more welcome. There have always been nonconformists.

Using a character who does not conform requires anchoring her unconventional ideas in the context of the time period. If a writer doesn't then it appears anachronistic and contrived.

I think that the character has to acknowledge the mores and strictures and respect the power that they have in her world. I think that she has to experience the penalties of violating the social rules. The other characters can't act like it is no big deal either. I believe it helps if she does not live in a contrary way for frivolous reasons, or take stupid risks and do silly things just because she is in a pique of rebellion. 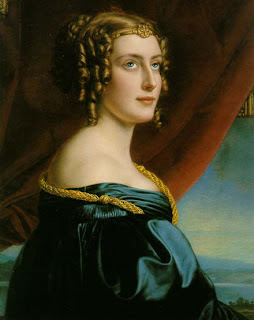 Elizabeth Kerri Mahon has a whole blogful of historical scandalous women. Here's one example, which ends with a real 19th-century sheik romance. Jane Digby (her portrait is on the left) had already lived an exciting, scandalous life when,

middle-aged but still stunningly beautiful, and vowing to renounce men, she headed for Syria, to see Palmyra the legendary kingdom of Zenobia, where she met and married the love of her life, a Bedouin nobleman, Sheikh Medjuel el Mezrab who was twenty years her junior. Medjuel offered to divorce his wife for Jane, within minutes of meeting her. Despite the advice of the British Counsel and her family, she threw caution to the wind, finally finding the one man, she could bond body and soul with.

On the topic of history, when I was reading Adrianne Byrd's When Valentines Collide recently I was suddenly reminded of Eloisa James's Your Wicked Ways. Both books 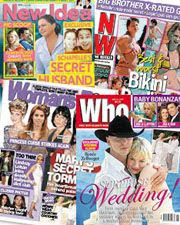 It's with regard to that last point that the difference in "the 'rules and regs' of the society" in which the novels are set is most noticeable. In part that's also due to the difference in their professions: Byrd's couple would lose professional credibility if their marital difficulties were revealed to the public, whereas in James's novel it's the heroine whose reputation would be damaged should some of the details of their relationship become widely known. Nonetheless, the fact that the books are so very similar in many ways both in terms of plot and style (in addition to the points outlined above, both novels contain humorous episodes and interesting secondary couples) really highlighted for me the importance of the setting. Although some problems related to love, marriage and celebrity seem to have changed very little in the past few hundred years, the historical period in which the stories are set does and should make a difference to how those problems manifest themselves and what the characters think and do about them. 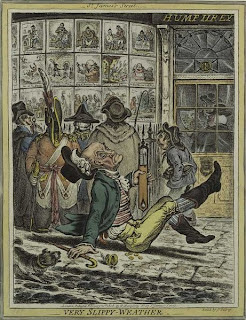 The illustrations show the changing nature of celebrity gossip. The first is a photo of modern Australian gossip magazines, taken from this article. The second is a James Gillray print from 1808 depicting caricatures displayed for sale in a shop window.
------
In October the Smart Bitches posted about a letter published in The Lancet in which Dr Brendan D. Kelly reported, in a tongue-in-cheek manner on his research into medical romance novels. His sample size was small (20) but he was nonetheless able to detect some common features and draw some conclusions:

These novels draw attention to the romantic possibilities of primary care settings and the apparent inevitability of uncontrolled passions in the context of emergency medicine, especially as practised on aeroplanes. These novels suggest that there is an urgent need to include instruction in the arts of romance in training programmes for doctors and nurses who intend working in these settings.

The BBC also reported on Kelly's research and he told them that medical romances can give "a good insight into how people think medicine should be." The novels certainly do present an ideal, yet the Harlequin guidelines for the medical romances seem to go a little further and suggest that the novels

capture the pace, warmth, tensions, dilemmas, traumas and triumphs of modern medical professionals — strong, dedicated, determined and caring men and women. Heroes and heroines are equally matched and equally respected professionals. They would also move a mountain to save a life or find the right treatment — heroes and heroines you would like on your side in a medical emergency.

One can't quarrel with that last sentence. Whatever their romantic trials and tribulations, the heroes and heroines of medical romances never let their patients suffer as a result.

A follow-up to the initial interest in Dr Kelly's research was recently reported at the I Heart Presents blog: "Bestselling Medical author Caroline Anderson was interviewed [...] on BBC Radio 4’s Woman’s Hour as part of a feature on romance, medical drama and fiction." The audio clip is still available at the BBC website.
Posted by Laura Vivanco at Sunday, November 25, 2007