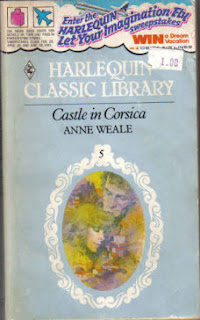 Last weekend I put the finishing touches to my ballot for AAR's Top 100 Romance Novels. Among the many category romances that ended up being on my list is Anne Weale's Castle in Corsica at #56. I found the book five years ago in the darkest, dustiest corner of the English Bookshop in Mainz, together with several other old Harlequin novels. I greatly enjoyed Weale's novel, especially the ending when, just as the heroine is about to leave the island, the hero races after her to make her face the truth about their relationship:

"For once in your ostrich existence, I want you to face the truth. If you honestly believe that the feelings that you've been at such pains to suppress boil down to nothing more than antagonism -- well, I still won't be convinced but I'll accept it. But be very sure you aren't deluding yourself, little one." He paused and she saw the muscles at his jaw working. "I'm asking you to marry me, Polly."

Right on the next page he calls her a nincompoop and continues to give her an ultimatum: he'll wait outside in the car and give her half an hour to make up her mind -- and she lets him wait 25 minutes (which he apparently spends "pacing up and down the pavement behind the car" -- tee-hee, he is definitely not as cool as he wants to make her believe) before she finally comes after him. I have, of course, no idea whether the author intended it to be read this way, but I thought the scene very sweet and funny, though it does have some gritty undertones. Yes, from among that stack of old Harlequin novels I found in that dark corner in the English Bookshop, Castle in Corsica is one of my favourites.

Yesterday I was greatly saddened to learn from a post on Kate Walker's blog that Anne Weale had died on 24 October. Between 1955 and 2002 she wrote 88 novels for Mills&Boon, the last one having been The Man from Madrid. In the "Dear Reader" at the beginning of the book, she calls herself a "World Wide Web enthusiast" and writes, "I believe the Web can be used to enhance our enjoyment of reading." It is therefore not surprising that from 1998 to 2004 she wrote a website review column for the UK magazine The Bookseller, which she later used as a basis for her blog, Bookworm on the Net.
A biography of Anne Weale can be found on the Harlequin website (for some reason the link on the M&B website seems to be broken). Both Kate Walker and Liz Fielding have written tributes to her on their blogs.
Posted by Sandra Schwab at Saturday, November 03, 2007